That’s why I made this Donner DDP 100 vs 300 comparison, to get to the bottom of the debate. And in the end, I found that the Donner DDP-100 puts up a great fight against the more expensive option.

While the Donner DDP-300 won out with its varied voice selections, better feel, and more playing modes than the DDP-100, I was actually surprised at how close of a fight it was. This is because despite the lower price point, the Donner DDP-100 also comes with great features that makes it a great choice for just about any beginner pianist out there. 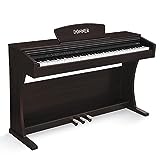 While both of these models come from the same line and brand, they also have a fair amount of differences. So, to find out the winner in this Donner DDP-100 vs 300 comparison, I decided to compare each of the pianos’ features against one another. And in the end, the final score was 4-1 in favor of the DDP-300.

But don’t let the scoreline fool you, the fight was actually much closer than you might expect since both pianos come with a great set of different features making them ideal for any beginner and novice pianist out there.

A key feature of both the Donner DDP-100 and 300 is the fact that they use the AWM sampling method originally created for Yamaha digital pianos. The result is a rich and bright piano tone on both instruments. But in the end, the Donner DDP-300 eventually beat out the DDP-100 because of its versatile set of different tones and voices.

As mentioned earlier, both of these models use the AWM sampling method. Originally developed for Yamaha pianos, this method isn’t too different from the traditional sampling method and works in the same general way. Whenever you press a key on either of these pianos, the keyboard will play a sample recorded for a real instrument.

However, most budget-friendly digital pianos use low-quality recordings with digital decay. While this results in a less accurate tone, it does make the piano more affordable by saving on memory. However, with the AWM sampling method, Donner doesn’t skimp on memory to provide players with an incredibly rich and bright set of tones.

When using AWM sampling, the piano stores high-quality stereo samples recorded with natural decay. While the differences are subtle, they are very important in creating a very accurate and rich piano tone. And after testing both pianos out by ear, I found that they easily beat out a lot of other models in their price range.

The reason is its varied sound library.

On the DDP-100, you only get one piano tone. While this is fairly limiting, this might be a good feature for beginners. Since you only have one voice, you won’t get distracted and end up playing around with other sounds. On top of that, since the piano only has one tone, Donner was able to keep a close eye on its development and the result is one of the most realistic piano tones in its price range.

On the other hand, the DDP-300 has 10 different voices. And since it’s the flagship model of the DDP collection, it still has the great, rich piano tone of the DDP-100. But on top of that, it has a variety of electric piano, synth, strings, and bass tones. If you’re a beginner, you might not need all of these different tones, but it’s always nice to have that variety and room for experimentation.

The Donner DDP-100 features traditional progressive hammer action. This is better than regular fully-weighted keys as the keys on the left side will be a bit heavier than the keys on the right side. This provides a more realistic feel that mimics the sensation of playing a real acoustic piano. And in fact, I’d have to say that the feel of the DDP-100 beats out just about any other piano in its price range.

However, the Donner DDP-300 comes with the lauded GHS system. GHS stands for Graded Hammer-action System, which was also developed for Yamaha pianos. It takes the same principles of progressive hammer action, but employs more sophisticated technology to mimic the feel of a real acoustic piano.

With that said, the difference is minimal. While there’s no denying that the DDP-300 has better and more realistic hammer action than the DDP-100, most beginners won’t be able to tell the difference anyway. But the longer you plan the instrument and the more you familiarize yourself with the acoustic piano, the more glaring the difference becomes.

When it comes to key texture, I would have to say these pianos are tied. And depending on how you look at it, this could even be a point in the DDP-100’s favor. The reason I say this is that despite the DDP-100 being much more affordable than the DDP-300, both pianos feature the same key texture, which is a slight letdown on the side of the DDP-300.

Neither of these pianos have any coating on their plastic keys. So, you won’t get the same texture or feel of an acoustic piano. Most digital console pianos use a synthetic ebony and ivory material for their keys. However, the DDP-100 and DDP-300 only use plastic keys.

The result is a glossy finish and very slippery feel. Granted, these keys still had more grip than other uncoated plastic keys like on the Yamaha P45. However, when you become an experienced pianist, this plastic texture could hinder your playing, which can sometimes result in pianists needing to upgrade their instrument.

When comparing the DDP-300 to other digital pianos, you might find it lacking in terms of the different playing modes. However, when comparing it to the DDP-100, which has no additional playing modes, the DDP-300 seems like a very versatile option. The reason for this is that the DDP-300 comes with a duo-mode function. This mode has different names depending on the brand and manufacturer, but it serves the same purpose: dividing the piano into two mini keyboards with the same tuning.

The main application for this mode is during piano lessons. When you activate this mode, you and your teacher will have the exact same pitch and timbre on either side of the piano. That way, the teacher can conduct demonstrations and corrections to your techniques without having to cross over to the other side of the piano.

Along with this mode, the DDP-300 also has a metronome function and recording function. This is great for practicing as it helps you keep time. And with the recording function, you can listen back on your playing and figure out where you need to make improvements and adjustments.

The Donner DDP-300 doesn’t come with that many effects, but it does come with reverb, which is very important for pianists. With reverb, you can add a bunch of depth and texture to the original piano tone and give the illusion that you’re playing in a wider space like a concert hall or theater.

It would have been nice for the DDP-300 to also come with a chorus effect, but that sadly isn’t present. However, compared to the Donner DDP-100 which has no additional effects, the Donner DDP-300 offers pianists much more versatility.

One of the primary features of both of these pianos is the pedal unit. Since these are console digital pianos, they both come with a three-pedal unit with a sustain, soft, and damper pedal. This is just like the pedals you have with an acoustic piano, and it easily beats out many other models in their price range. Most pianos in the sub-$800 range don’t feature a three-pedal unit, which is a huge point in both these pianos’ favor.

These two pianos are very much tied in terms of portability. And with these models, that actually means that they aren’t portable. These are heavy and bulky digital pianos, so once you set it up, the instrument is designed to stay in the same place for a long time. So, if you need an option for playing gigs and jamming with friends outside your home, then these aren’t the right options for you since they are both fairly heavy, bulky, and impractical to transport.

These pianos are from the same brand and the same line, so you can expect a couple of similarities here and there. For example, both models are console digital pianos with a full-key keyboard. On top of that, they both feature a three-pedal unit, progressive hammer action, and use the same tone generation method.

Both of these pianos were designed for beginners on a budget. That’s why if you look at the price tag, they are significantly more affordable than the other options with the same features. So, if you’re looking for a beginner’s digital console piano under $800, either of these pianos will serve you very well. However, it’s worth mentioning that since the DDP-300 is the flagship model, it does come with more features and versatility.

Quick Rundown of the Donner DDP-300

Quick Rundown of the Donner DDP-100