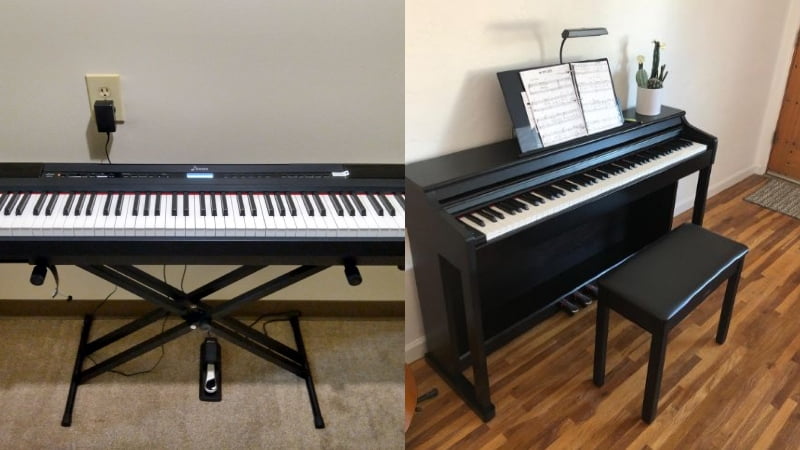 At first glance, it’s easy to assume that the Donner DDP-100 would win in a Donner DDP-100 vs DEP-20 comparison. Since it’s a console digital piano, most people expect it to come with more features, a richer tone, and be an overall better option.

However, after testing out both pianos, I can confidently say that this is not the case. While the DDP-100 does offer an exquisite piano tone, realistic feel, and comes with a three-pedal unit, it simply lacks the versatility, portability, and extra piano features that you can find on the DEP-20.

So, after an in-depth comparison, I found that the DEP-20 is the better option between the two, especially for beginners. While the piano tone isn’t as bright or accurate, the DEP-20 comes with more features and is easily the more versatile option when comparing the two pianos.

When trying to determine which is the better option between the two, I decided to compare the different features up head to head. And in the end, the Donner DEP-20 won with a score of 3-2. Based on the score, you can tell it was a very close match up, which is 100% true.

Both of these pianos offer a different set of features that will benefit different pianists. However, the DEP-20 comes with much more versatility and can appeal to a wider range of pianists, which is why I chose it as the easy winner between the two.

The first area of comparison for these two pianos is the feel. And to be honest, it was almost a tie between the two as both options have graded hammer action, which is key to replicating the feel of an acoustic piano. But because of the wooden console stand and wooden features of the Donner DDP-100, I found that it better resembled an acoustic piano compared to the Donner DEP-20.

For starters, the hammer action of both pianos is about the same. They both sport a form of progressive hammer action. With this set up, the lower keys on the left side will be naturally heavier than the higher keys on the right. This is the exact same way an acoustic piano is set up, and it’s the main reason both of these pianos are ideal for beginner and novice pianists alike.

However, when testing out both options, I found that the DDP-100 offered a more realistic feel. It was hard to pin-point exactly why the DDP-100 felt more natural, as it could be a combination of a number of factors such as the wooden accents and the design of the piano itself.

In terms of key texture, both pianos feature glossy keys. This is because the keys are made of plastic, which is a common way for brands and manufacturers to significantly lower the cost of production. However, this gets in the way of the realism of the piano.

Traditional acoustic pianos have wooden keys. These keys have a very distinct feel to them and experienced pianists can instantly tell the difference between wooden or plastic keys. Normally, brands will coat the plastic keys with something to make it resemble the texture of wooden keys, but there isn’t any coating on either the DDP-100 or the DEP-20.

With that said, the glossy finish on the DEP-20 results in slightly more slippery keys. When testing out the DDP-100, the glossy keys were definitely an issue, but they weren’t as slippery as the DEP-20.

It was hard to determine a winner when it came to the tone. Since both of the pianos use the same tone generation method, the sound of the instruments are very similar. However, I had to admit that the piano tone of the DDP-100 was superior by miles. And in the end, the reason I chose the DEP-20 as the winner was because of its wide and varied tone library that gives pianists much more versatility.

Both of these pianos use the AWM sampling method originally pioneered by Yamaha digital pianos. This varies from the regular sampling method as it includes the natural decay and stereo sound of the instrument. In the past, pianos would use a digital decay and lower-quality samples for their tones as that saves on memory. To fix this, Donner equipped both pianos with a larger memory capacity, which is what made the tones much richer in quality.

With that said, the Donner DDP-100 definitely has a better piano tone. Since this instrument only has one tone, Donner could load it with the highest quality samples possible, and it’s instantly reflected in the tone. However, the DEP-20 is very close behind with its tone as well, which can easily beat out tons of options in its price range.

In the end, the main reason the DEP-20 took the cake in terms of tone was because of its sound library. One of the major knocks on the DDP-100 is that it only has one single piano tone. It doesn’t offer any choices or variations such as electric pianos, and this is to ensure that Donner could create a top-tier voice for the instrument. And while this is true, it greatly limits what players can do on the DDP-100.

On the other hand, the DEP-20 has a massive sound library with over 238 different voices to use. This gives players a lot of room for experimentation and a wide variety of different sounds to play with. If you play with a band, like creating your own music, or if you want to learn how to play with electric piano tones or bass tones, this is the model for you.

Granted, with 238 voices, there are going to be some that are low-quality and a fair amount that you won’t use. However, I would take the versatility of the DEP-20’s 200+ voices over the DDP-100’s single piano tone any day of the week.

Another area where the DDP-100 beat out the DEP-20 is in the sound system. Sadly, it’s pretty hard to find any specific information on the speaker systems of either piano, so I largely had to rely on an ear-test when comparing the speakers of these two instruments.

The DDP-100 is a larger instrument that gave the brand more room for a speaker system. The speakers on the DDP-100 are significantly larger and louder than the DEP-20, which is a great feature to have. So, on top of the high-quality tones of the DDP-100, you’ll be hearing the sound come out of top-quality speakers, which is another reason that this model is one of the best on the market today, especially for those in search of a console digital piano.

While most of the comparisons up until this point were very close-knit fights, the Donner DEP-20 beat out the DDP-100 by miles in this category. It simply has more playing does, built-in effects, and some other piano features that make it the better overall option for beginner pianists.

The Donner DEP-20 comes with layering and split modes. These are very cool features to have and allow you a lot of room for experimentation. With layering mode, you can load two different voices at the same time and blend them together. You can choose different piano sounds, string sounds, bass sounds, and just about any two voices on the instrument to blend together. On top of that, you can even tweak the mix level of the different voices, which is a huge benefit.

With split mode, you can divide the piano into two different mini-keyboards with different voices. This is a feature that comes in handy when performing, as you can give the illusion of playing two separate instruments at the same time, which is very useful for beginners and experienced performers.

You can even record your playing on the Donner DEP-20 so you can listen back on it and take notes on areas that are in need of improvement. The recording quality isn’t great for songs and beats, but it is good enough for you to listen back and take notes.

On the flip side, the Donner DDP-100 doesn’t come with any of these playing modes. This is because the brand focuses on creating a great piano tone for this instrument and offers a simpler and a more straightforward approach to playing the piano.

The Donner DDP-100 doesn’t come with any effects. That means you won’t be able to tweak the tones or add any depth to them. The piano tone on the DDP-100 is top-tier, so you won’t really need to do any tweaking as a beginner, though it would have been nice to have the option.

With the Donner DEP-20, you have reverb and chorus effects. For most piano players, these are all the effects you need. You can add a lot of depth and texture to your tone with this effect, allowing for more customization and versatility.

The one piano feature that the DDP-100 has that isn’t on the DEP-20 is a three-pedal unit. This unit gives you the full experience of playing an acoustic piano with a damper, a soft pedal, and a sustain pedal. The DEP-20 only has a single port for sustain pedals, which is fairly limiting, but not too big of an issue.

The factor that determined the winner in this comparison was portability. The reason that I chose the DEP-20 as the winner is that it’s a portable piano you can bring with you to lessons, jams, and performances. While it’s possible to transport and move the DDP-100 around, it’s a huge hassle since it’s heavy and features a wooden stand.

So, if you plan on bringing your piano around with you for performances and jams, the Donner DDP-100 won’t do the job. On the other hand, the Donner DEP-20 does this exceptionally well since it’s lightweight and easily fits into a keyboard bag.

While it might seem like these two options are very different from each other, they do share some similarities. Since they are made by the same brand, you can expect them to share some features here and there. A good example of this is their tone generation method.

While the tones of both pianos sound fairly different from each other, they function in the same way. The tones on both pianos are generated through the AWM Sampling method, which is why both of them feature great voices for their price.

Additionally, the pianos also share the same hammer action. As I said earlier, the DDP-100 feels more realistic for a number of reasons, but the DEP-20 uses the same system for adding weight to the keys.

And that’s about where the similarities end, since these pianos are made for different pianists, they have incredibly varied features. If you’re looking for a console piano, then there’s nothing wrong with the DDP-100 at all.

But if you need a versatile digital piano that you can move around and try out different voices and playing modes, the Donner DEP-20 is the obvious choice.

Quick Rundown of the Donner DEP-20

Quick Rundown of the Donner DDP-100