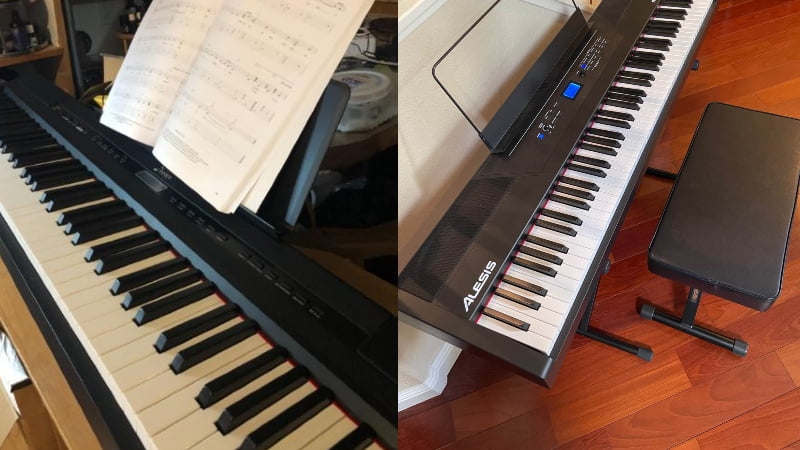 Since these are some of the best beginner’s pianos out there, creating a Donner DEP-20 vs Alesis Recital Pro comparison was almost a no-brainer. And while it was a very close fight, the Donner DEP-20 eventually came out on top.

So, why is the Donner DEP-20 a better piano?

The main reason is the tone and sound library. With the AWM Sampling method originally developed by Yamaha, Donner has created a great beginner’s piano with surprisingly good tones and an incredibly wide and vast sound library. On top of that, I found that the Donner had a slightly better feel when compared to the Alesis Recital Pro.

With that said, the Alesis Recital Pro does come with better piano features and a simpler interface, which still makes a great choice for beginners. Find out all the specifics of why the Donner is the better piano in this in-depth review.

The best way to compare two different pianos is to put their features up head-to-head. That way, you can figure out which areas a piano excels and what areas are in need of improvement. And when doing this for the Donner DEP-20 vs Alesis Recital Pro comparison, the Donner model came out on top with a score of 3-1. While it might seem like the Donner knocked the competition out of the park, the real story is very different. The Donner had better tones and a more realistic feel, but the Alesis Recital Pro was close behind in every single feature.

While both of the pianos have fully-weighted keys, the Donner DEP-20 simply had a more realistic feel. Additionally, the Donner DEP-20 has more accurate touch sensitivity for better playability. With that said, the key texture of both models was significant letdowns.

The Donner DEP-20 is equipped with graded hammer action. This means that the action on the left side is heavier than the action on the right side. This is how an acoustic piano is set up and the Donner model is designed to replicate just that.

While it doesn’t use the same system as the sophisticated Yamaha pianos out there, it still provides a very realistic feel. When testing out the Donner DEP-20, the action was on the slightly heavier side, but it still felt very realistic. On top of that, there are some pianists who might actually enjoy heavier action.

The reason I found the hammer action of the Recital Pro lackluster is that it isn’t graded. While the keys are fully-weighted, it has roughly the same action throughout the same keyboard. This is about what is expected from a keyboard in this price range. However, since the Donner DEP-20 features a graded hammer action system, it was the easy winner when comparing these features.

If you’re a beginner, adjustable touch sensitivity can be very important. It makes it much easier for you to tailor the piano exactly to your playing style and needs, which is a very useful feature.

The Alesis Recital Pro also features adjustable touch response. However, many users have complained that this feature doesn’t work that well. In fact, for some pianists, the difference is so subtle that you don’t even recognize it. So, while the feature exists on the Recital Pro, it could have been done much better.

One area where I was let down by both pianos was the key texture. However, since they are both entry-level digital pianos, it’s kind of understandable. The keys on both these pianos have very glossy keys made out of plastic. Now, plastic keys are completely fine, as even some of the more expensive models on the market use plastic keys.

However, the keys don’t have any coating to resemble the texture of real piano keys. If you’re a beginner, this flaw isn’t that glaring, however, as you start playing more complex pieces, you’ll start feeling the need for slightly textured keys.

When it comes to tone, I wasn’t expecting much from these pianos, especially since they’re entry-level options. However, I was pleasantly surprised by the robust tones that these pianos could generate. And in the end, the Donner DEP-20 also won out in this comparison because of a more complex tone generation system and a vast sound library.

Both of these pianos use samples to generate tones. That means that the brands recorded top-quality sounds from real instruments such as pianos, strings, and even bass tones. And whenever you press down on a key, you trigger one of these samples, which produces the sound.

The Alesis Recital Pro features very standard samples. While they are far from bad, they aren’t exactly the best, even in its price range. The samples on the Recital Pro don’t exactly sound digital, but it’s fairly evident to the trained ear that the sounds aren’t coming from an acoustic piano.

The Donner DEP-20 uses the AWM sampling method that originally came from Yamaha. This method involves using very high-definition stereo samples of real instruments recorded with natural decay. This means that the samples take up much more memory but contain more sonic information, which is the reason for the top-quality tones.

There was almost no competition when it came to comparing the sound library of these two models. The Alesis Recital Pro comes with 12 different voices. This is about standard for a digital piano, and since the voices are good quality, beginners have just about all the sounds they need to start learning the instrument.

However, the Donner DEP-20 completely blows the competition out of the park with more than 200 voices! Now, to be realistic, you won’t be using all of these voices, because some of them are very similar or not that good to begin with. With that said, this still leaves you a lot of useful, varied, and top-quality voices that fit many different styles of music.

The Alesis Recital Pro, with its 12 voices leaves a lot to be desired. In fact, the piano even lacks some of the basic piano voices you’d expect from a digital piano such as a Rhodes. The Donner DEP-20, on the other hand, gives you multiple options of just about every sound you need, making it ideal for pianists looking for more versatility.

This is one area where the Alesis Recital Pro came out the winner. Since it’s the more affordable option between the two, the fact that they have the same playing modes and polyphony is a huge point in its favor. On top of that, the Alesis Recital Pro even comes with more effects, which is very useful for just about any pianist out there.

With layering mode, you can combine two distinct piano voices. For example, you can load string pad and piano voices at the same time, adding a whole lot of depth to your tone. This feature comes in handy trying to accompany a vocalist or even another solo instrumentalist. With split mode, you can assign different voices to either side of the piano, allowing you to give off the illusion of playing two instruments at the same time. If you plan to perform with the piano, this is a very useful feature.

The one mode on the Alesis that isn’t on the Donner however is duo mode. Duo mode is a very useful feature for beginners, as it makes piano lessons much easier to handle. With this mode, you can divide the piano into two tiny keyboards, each with the same tuning and pitch. That way, you can view the keyboard as two different pianos: one for the teacher and one for the student.

The reason I gave the point to the Alesis model despite it having the exact same polyphony as the Donner is because it’s the cheaper model. That means if you buy the Alesis, you’ll be getting a bit more value, but only in terms of piano features.

These are two entry-level pianos primarily designed for beginners looking for their first instrument. With that comes a lot of similarities, and in all honesty, both of these pianos do the job very well and would make a great choice for any pianist.

For starters, they are both full-key pianos, which is necessary when starting out with the instrument. While it might be tempting to buy a smaller, 64-key keyboard, there are tons of benefits that come with getting a full-sized option. On top of that, these pianos have a very similar build and design.

Since they are some of the cheaper models out there, they are made out of plastic. With that said, the builds of either of the pianos are far from flimsy. In fact, they feel fairly durable despite the material. On top of that, both pianos are fairly lightweight, which allows you to easily carry them around with you.

And that’s about where the similarities end. As you can tell by this comparison, the pianos have a fair amount of differences, which made the comparison a whole lot of fun. And in the end, I found out that the Donner DEP-20 comes with better tones and a better feel, which makes it the better option for beginners since it can last pianists a much longer time before needing an upgrade.

Quick Rundown of the Donner DEP-20