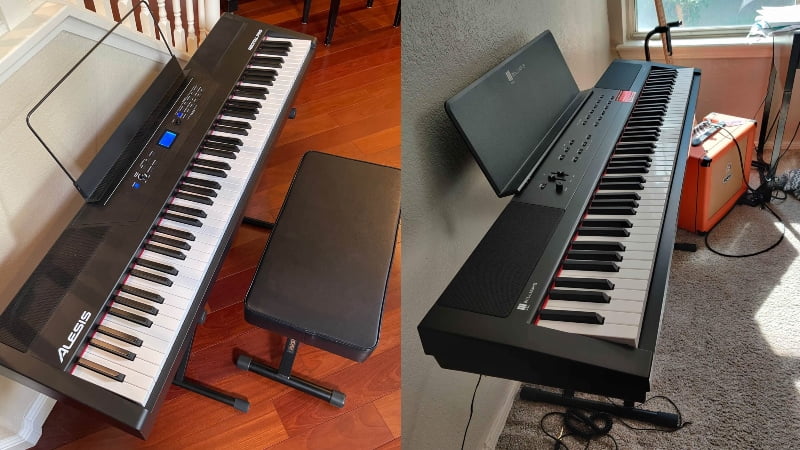 In my search for the best beginner pianos out there, two models that instantly caught my eye were the Alesis Recital Pro and the Williams Allegro III. They are within the same price range, offer a similar set of features, and even have a similar sound library.

But which was the better option in this Alesis Recital Pro vs Williams Allegro 3 comparison?

After careful consideration and testing out both models, I found the Alesis Recital Pro to be the better option. With a better sound library, tone generator, and superior feel, it was an easy choice in the end. If you’re on the hunt for a beginner’s piano that offers bang for your buck, you can’t do much better than the Alesis Recital Pro.

With that said, the Williams Allegro III still put up a good fight, with a decent set of piano features and even bluetooth MIDI connectivity. And in this comparison, we get into all the fine details of both options. 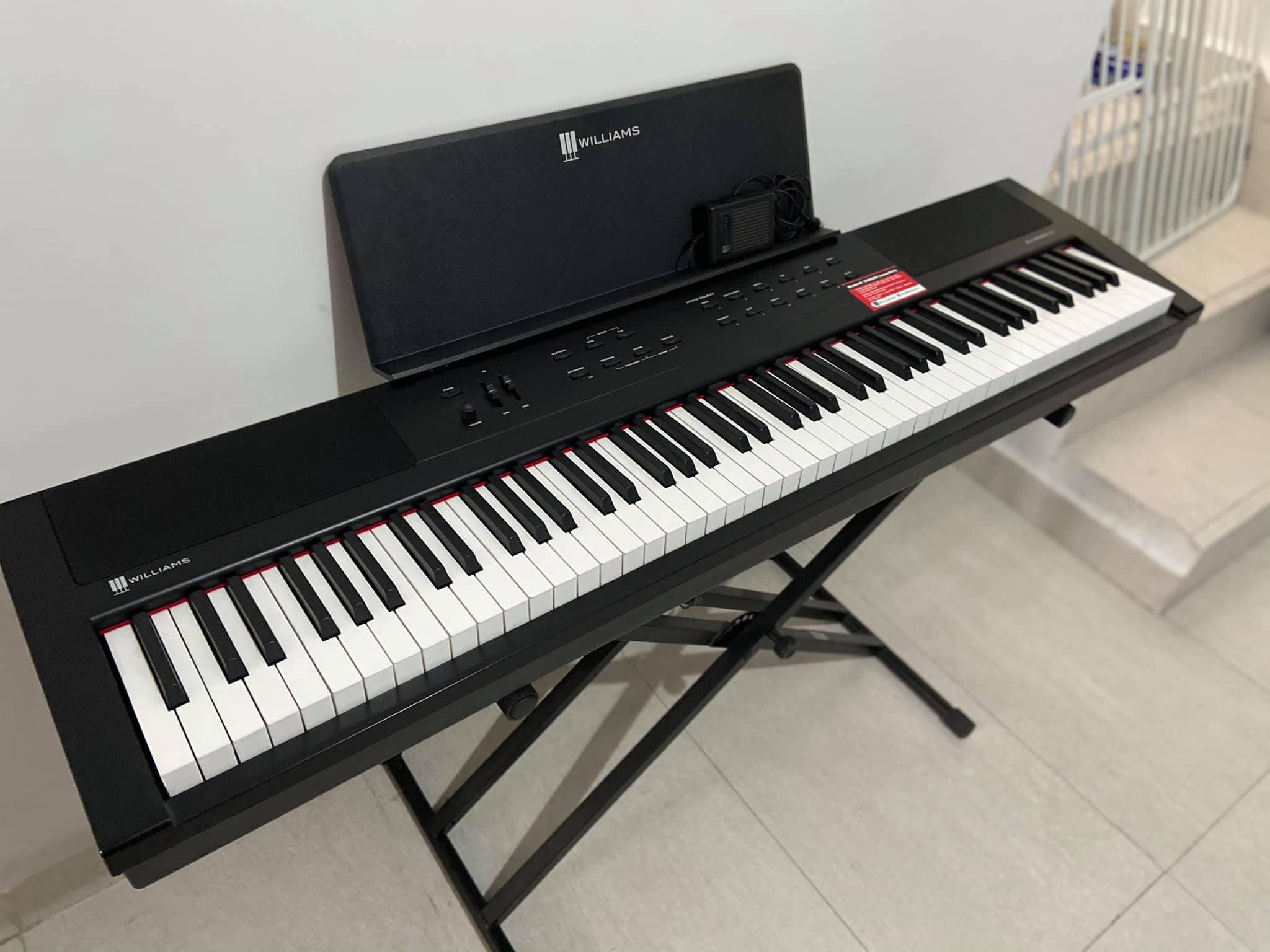 Since both of these pianos come with a varied set of features, I figured the best way to compare them was to put their features up against each other. And when comparing each of the features, the Alesis Recital Pro won out with a score of 3-1. While the score may seem like the Recital Pro knocked it out of the park, the details tell a much more complex story.

In terms of tone, it only took a couple of ear tests for me to figure out that the Alesis Recital Pro was the better option. Both of these pianos use a similar tone generation method, but the Alesis was loaded with higher-quality samples, which is why it sounded brighter and richer. On top of that, the Alesis model had a wider sound library, making it the more versatile option between the two.

While it was hard to find specific information about the tone generation of either piano, I did learn that they used the sampling method to generate their tones. This wasn’t exactly a surprise, since sampling is one of the most popular ways to generate tones on electric pianos and keyboards. In fact, even pianos and keyboards in higher price ranges use sampling for their tones, since it’s a convenient way to provide high-quality sounds.

So, why does the Alesis Recital Pro have better tone despite using the same tone generation method?

The answer lies in the samples themselves. When using the sampling method, the secret to realistic and high-quality voices is to use good samples. And when testing out the pianos myself, the Alesis Recital Pro seemingly had better samples than the Williams Allegro III. The Alesis featured richer and brighter tones, and while it still sounded slightly digital, I noticed that the samples on the Williams Allegro III sounded very digital and couldn’t compare to the Recital Pro.

When you go out looking for digital pianos, you shouldn’t expect a wide sound library. Most digital pianos prioritize quality over quantity when it comes to voices, and this rings true with these two models. The Williams Allegro III comes with 10 pre-loaded voices, while the Alesis Recital Pro comes with 12.

On both models you have fairly similar categories such as acoustic pianos, electric pianos, synths, organs, bass, and string sounds. However, the Alesis Recital Pro does come with a little bit more variety when it comes to the voice library. This is very important for those who are particular about their tone, especially since the Recital Pro is loaded with a bunch of great piano tones.

With that said, if you’re a beginner you won’t exactly need that many voices when learning the ropes. However, it’s still better to have voices that you won’t use than to lack voices you need.

I was slightly let down by the feel and playability of the Williams Allegro III. On their website, they say that the piano is designed for professionals and advanced players. However, when trying out the piano, the hammer action and key texture seemed fairly inaccurate, which is why the Alesis Recital Pro is the better option when it comes to feel and playability.

One thing to note about the Alesis Recital Pro and the Williams Allegro III is that they don’t have specific hammer action technology. Other lines such as the Yamaha “P” collection sport GHS hammer action, which is a technology developed by Yamaha to replicate the subtle details of an acoustic piano’s hammer action. A system like this isn’t present on the Recital Pro or the Allegro III, but considering that they’re relatively affordable digital pianos, that was understandable.

With that said, both pianos still sport fully-weighted keys. I was slightly let down that they didn’t sport progressive hammer action, where the left keys are heavier than the right keys, but that’s a subtle detail most beginners won’t notice anyway. So, considering the price of these pianos, they provide fairly realistic hammer action that beats out a lot of other models in the price range.

However, after trying out both pianos multiple times, I found the Alesis Recital Pro to have the better action. The Williams Allegro III felt very synthetic and while the weight was close to that of an acoustic piano, the subtleties were not there. On the other hand, the Alesis Recital Pro offered a very realistic feel, despite having even hammer action throughout the entire keyboard, which is why I declared it the winner.

In terms of key texture, these pianos sadly didn’t offer anything special. This is because the Alesis Recital Pro and the Williams Allegro III have plastic and glossy keys. Plastic keys aren’t exactly a bad thing, however, if they aren’t given a proper coating, they feel pretty weird on the fingers.

Granted, the texture of the keys of both pianos wasn’t as slippery as some of the other options in their price range. However, they definitely weren’t up to par with the coated keys you’ll find on the more premium models. But since the Alesis Recital Pro still had a more realistic hammer action system, it won out over the Williams Allegro III in terms of playability.

This is the one area where I can confidently say that these pianos are tied. Since they have the same playing modes, it was hard to choose a winner. On top of that, the features that one piano was lacking, the other had, so it was a very definitive tie between the two when it came to piano features.

When dealing with digital pianos, there are three playing modes that are very important: split, dual, and duo. If you’re looking for your first piano to use for lessons, then it would be very beneficial for your piano to have most, if not all of these playing modes. The Alesis Recital Pro offers all three playing modes, while the Williams Allegro III only offers dual and split mode, which are arguably some of the most important playing modes for any pianist.

With split mode, you can divide the piano into two separate zones with different voices. For example, most pianists will load a bass voice on the left side and the right side with a piano voice. Another popular option is to load a drum kit voice on the left side and an organ on the right side. This gives you a lot of versatility when playing and it gives off the illusion that you’re playing two instruments at a time.

With dual mode, you can blend two voices together. A popular combination is strings and piano when you’re accompanying a singer or another instrumentalist. This gives the voice much more body, making it great for playing background music. With both of these pianos, you can mix and match just about any sound available on the keyboard to come up with a unique sound.

Duo mode is a great feature for beginners and isn’t available on the Williams Allegro III. Duo mode splits the piano into two different zones with the exact saming tuning and timbre. This is designed for piano lessons, since it allows the teacher to demonstrate certain techniques to the student or play along with them without having to cross over to the other side. It can also be great for piano duets if you don’t have two digital pianos on hand.

While the Alesis Recital Pro held a slight advantage with the playing modes, the Williams Allegro III offered more connectivity options that are great for beginners. With both pianos, you can plug in headphones for private practicing sessions. This is very useful, since the speakers on these models aren’t that great, you can make up for that by using headphones or plugging into a better sound system.

Additionally, both of these pianos support MIDI connectivity. This is a very important feature for modern pianos, as it allows you to connect the instrument to your phone or computer. From there, you can use the piano as a MIDI controller for virtual instruments or even use it for piano learning apps on your computer or phone.

The difference, however, is that the Williams Allegro III also offers BlueTooth MIDI connectivity on top of USB connectivity. This can eliminate the need for wires, which is great news for any musician who has a cable management problem. Aside from that, using the BlueTooth capabilities of the Williams Allegro III, you can even connect to your iPhone or smartphone and adjust the settings with your phone.

Both of these pianos are designed for beginners. This is the first and primary similarity between the two. And since they are marketed to the same type of musicians, they share a whole lot more different similarities that are worth noting.

For starters, both of the pianos have fully weighted, 88-key keyboards. If you’re a beginner, this is the first feature you need to consider. One of the most important characteristics of a beginner’s piano is that it has a full keyboard with weighted keys. That way, it will be easier for you to jump between digital and acoustic pianos, since they have a similar feel and layout.

Additionally, both pianos use samples to generate tones. This isn’t the most sophisticated method, but it does offer fairly decent tones. And while I did notice that the Alesis had slightly higher-quality sounds, the difference wasn’t too large.

So, if you’re looking for a beginner’s piano, either of these options will serve you well. However, keep in mind that the Alesis Recital Pro still offers much more versatility and could last you longer on your piano journey compared to the Williams Allegro III.

Quick Rundown of the Williams Allegro 3