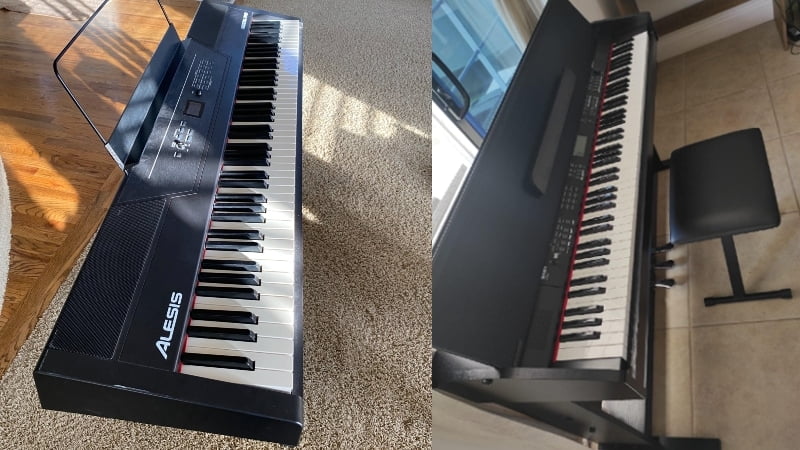 Both pianos are on the affordable end of the spectrum and offer a wide range of features fit for beginner pianists. In fact, if you’re on the hunt for your first digital piano, we highly recommend choosing between these two options.

But in this Alesis Virtue vs Recital Pro comparison, there could only be one winner. And with its wider set of tones and piano features, I ended up choosing the Alesis Virtue.

And while I thought the Alesis Virtue was the better investment overall, the details are a bit more nuanced. The Alesis Recital Pro is one of my favorite entry level pianos because of its great hammer action and different playing modes.

Either of these pianos would serve any beginner very well. But in the end, the Alesis Virtue seemed to come with a better set of features and offered more value for the price. 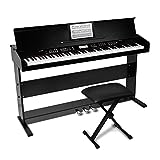 Finding a winner between these two options was pretty difficult. So, to make it easier I decided to compare each of the features head to head and by the end I’ll have a final score. And after comparing the tone, feel, and piano features of both options, the Alesis Virtue came out on top with a score of 2-1.

It was a very close fight, so keep reading to learn how the Alesis Virtue beat out the Recital Pro.

Both of these pianos have pretty similar tones, as they are entry level models in the Alesis catalog. However, I had to choose a winner. And while the tone quality of these pianos was very similar, the Alesis Virtue has way more voices than the Alesis Recital Pro, which is why it eventually won out in this comparison.

It was hard to find specific information on the tone engines of both these pianos. However, when giving these instruments a listen and analyzing the specs, I figured they both used samples to generate tones.

Now, for entry level pianos, sampling is the go-to way to produce sounds since you can produce high-quality voices without busting the bank. The secret to getting good voices when using samples is to load the pianos with high-quality samples.

And after closely listening to both instruments, I found that the samples were pretty high. While there was a slight digital texture to the tones, both of them sounded pretty close to an acoustic piano.

Granted, I have to say the Alesis Recital Pro sports a more realistic tone, which is probably due to higher-quality samples or better speakers. However, it isn’t that far-off with the Alesis Virtue, either. And when testing both pianos with headphones, the tones were barely distinguishable.

The main reason I found that the Alesis Virtue has a better tone is because of its sound library. When I tested out the Virtue, I was very surprised to find it had over 360 different tones!

These voices ranged from piano, electric piano, organ, synth, bass, all the way to drum and percussion tones. With console digital pianos, you don’t usually get this much variety, which was a huge point in Alesis Virtue’s favor.

With that said, not all of these tones are the best quality. While I found the piano, bass, synth, and even the strings tones to be great, the other more abstract tones like SFX and drums were lackluster, to say the least.

However, compared to the measly 12 tones on the Alesis Recital, I would take the flexibility and versatility of the Alesis Virtue any day.

When you’re starting out your journey into piano, it’s important for you to be able to experiment with a wide range of different sounds. So, since the Alesis Virtue comes with over 360 different voices with which you can experiment, it was the obvious choice between the two.

If you’re a beginner pianist looking for a practice instrument, weighted keys are a very important feature. If you have weighted keys, the piano will have a more accurate response that really feels like an acoustic instrument. And since beginners need to take time to get used to the feel of an acoustic piano, investing in a model with weighted keys is always a good idea.

The Alesis Recital Pro features fully-weighted keys. It would have been nciec to see progressive hammer action on this model, but that sadly wasn’t the case. With that said, the weight on the Alesis Recital Pro is pretty realistic and offers a similar feel to an acoustic piano, but it’s definitely missing out on some key details.

While I did have my own complaints about the hammer action on the Alesis Recital Pro, it is still much better than the non-weighted keys on the Alesis Virtue.

Non-weighted keys are a big deal when choosing a digital piano since they take away a lot of the realism when you touch the keys. However, if you’re a beginner with light hands or a child learning to play the piano, non-weighted keys might actually help you familiarize yourself with the notes and proper hand positions more easily.

But as you get better and more familiar with the piano, you’ll likely find yourself craving the weight of a real acoustic instrument, which is why the Alesis Recital Pro took this point over the Alesis Virtue.

There are two playing modes present on the Recital Pro and the Alesis Virtue. These are split and dual mode. Dual mode is sometimes referred to as layering mode, which is very important if you’re looking to play around with all of these different modes.

Split mode is great for performing solo or playing with a band. This mode allows you to split the piano into two distinct zones, each with a different voice. For example, the right side of the piano can be playing a piano voice while the left side is playing a bass or organ voice.

The result is the illusion that you’re playing two instruments at a time, which is a great way to fill up your sound when performing live.

Dual mode is another great performance and jamming feature. This mode allows you to blend or layer two different voices at the same time. This comes in handy if you’re accompanying another musician, or if you just want a bit more body and uniqueness to your piano’s tone.

The one additional playing mode on the Alesis Virtue, however, is recording mode. This is great for beginners since you can record your playing, listen back on it, and really find areas that are in need of improvement.

The Alesis Recital Pro doesn’t come with recording mode, which is a major drawback for any pianist. It is worth mentioning, however, that almost anyone can record audio nowadays using their phone, but having the feature built into the piano would have made things much easier.

In terms of connectivity, both of these pianos definitely hit the mark. You can plug in external speakers or headphones into both pianos for private practice or for performances, which is a huge plus. Additionally, both pianos support USB MIDI connectivity, which allows you to basically use them as MIDI controllers for virtual instruments and piano learning apps.

These are two very different pianos, but they both still have a fair amount of similarities. For example, they both have 128-note maximum polyphony. For beginner pianos, this is actually very good since most entry-level options leave you with just 64 note polyphony.

Additionally, these pianos both have reverb and chorus effects. As a pianist, these are likely the only piano effects you’re going to need, especially at the start. And since most beginner’s pianos don’t come with any effects at all, it’s a neat little feature that you can find on both the Alesis Virtue and Recital Pro.

Quick Rundown of the Alesis Virtue