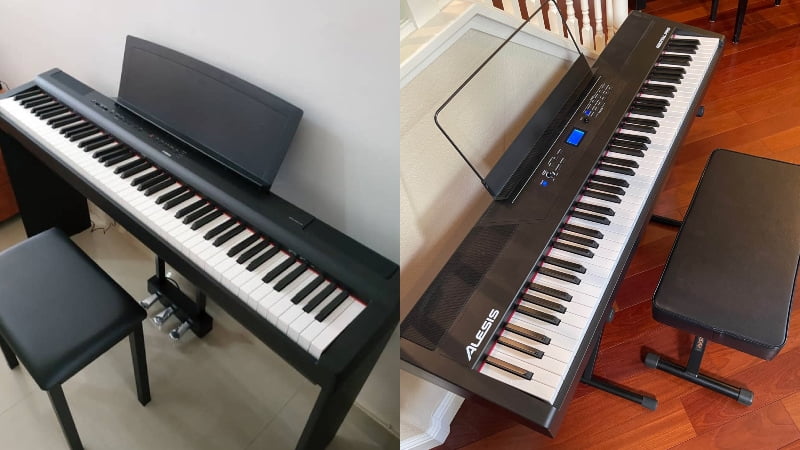 The Alesis Recital Pro is one of the favorite beginner digital pianos on the market. It comes with all the features you’ll need, a great sound library, and is available at a very affordable price. But in this Alesis Recital Pro vs Yamaha P125 comparison, the Yamaha model came out on top?

How did the Yamaha beat out the Alesis Recital Pro?

Well, the Yamaha P125 came with a much richer sound library, a wider range of effects, and judging by the ear test, had superior tone and voice quality compared to the Alesis Recital Pro. Granted, the Yamaha P-125 is significantly more expensive than the Recital Pro (over twice the price!), but considering the sheer quality of this piano, it’s easy to understand why it’s more expensive.

When testing out both pianos, I found that the Yamaha P125 was better in almost every aspect. On top of that, the “downsides” to the Recital Pro simply didn’t exist on the Yamaha P125. However, the Alesis Recital Pro was able to put up a pretty fair fight against the P125, which made this comparison very interesting.

To determine a winner between these two great pianos, I decided to compare all the features. And as expected, the more expensive Yamaha P125 beat out the Alesis Recital Pro in all aspects with a score of 3-1. But don’t let this lopsided scoreline fool you, as we dive deep into the details and features of both these pianos, you’ll learn how close of a fight it actually was. But while the Alesis model put up a good fight, it just couldn’t compete with the top-quality voices and realistic feel of the Yamaha P-125.

As mentioned earlier, the Yamaha P-125 is equipped with the GHS of Yamaha. This is a hammer action system designed to properly replicate the feel of an acoustic piano. So, with this model, you have heavier keys on the bass notes that get lighter as you progress up the piano. There are other models in this price range and lower that offer a similar hammer action set up, but after testing out the P-125 and other Yamaha models that have GHS, I found that Yamaha offers some of the best hammer action in the digital piano market today.

To be honest, I was let down by the key texture of the Yamaha P-125 and Alesis Recital Pro. Both of these pianos are equipped with plastic piano keys that don’t have any coating on them whatsoever. The result is fairly slippery keys that can make it hard to play faster and more advanced pieces. Granted, you won’t really notice the glossy texture as a beginner, but as you progress with the instrument, the difference becomes glaring.

With all that said, it was easier to forgive the lackluster key texture on the Alesis Recital Pro since it was the cheaper model. Glossy keys are a common quality of most entry-level pianos, which is why I was pretty disappointed that the Yamaha P-125 didn’t have any coating on them to simulate real wooden keys, especially considering its price.

Both of these pianos have the same adjustable touch response, which was a great feature to have. That way, you can adjust the piano according to your own touch, making for a more customized and tailored feel. Both pianos allow you to choose between hard, medium, soft, and fixed touch response. However, I noticed that the Yamaha P-125 was more sensitive and offered more subtle details whenever you press down on the keys, which is why it was ultimately the winner in terms of feel and playability.

One of the main reasons the Yamaha P125 has a higher price tag is because of its tone. When I first tried out both these pianos, the Yamaha P-125 had better quality tones than the Alesis Recital Pro, hands down. While  they both use a similar tone generation technique, the voices on the Yamaha P-125 were more realistic, and considering the fact that it has a wider sound library than the Alesis Recital Pro, it was very easy to determine the winner between the two.

In terms of tone generation, the Yamaha P-125 was a clear winner. It’s equipped with the Yamaha PureCF sound engine, which is largely considered one of the best tone engines in its price range. While it still uses samples just like some of the other mid and entry-level pianos on the market, Yamaha recorded samples from their own CFIII concert grand pianos, which are some of the most popular grand pianos in the world of classical music. So, the Yamaha P-125 captures the incredible clarity and distinct brightness of many Yamaha pianos, making for very realistic piano voices.

On the other hand, the Alesis Recital Pro sticks to standard sampling techniques. Since it’s their entry-level model, it isn’t equipped with the AiR tone generation you might find on some of the more expensive Alesis models. With that said, the samples on the Recital Pro are still fairly high quality and are much better than a lot of the options in its own price range.

The Yamaha P-125 has double the amount of voices as the Alesis Recital Pro. Since the Yamaha P-125 is the more expensive option between the two, you can expect it to have a better sound library. While the Alesis Recital Pro only has 12 built-in voices, the Yamaha P-125 has 24 different voices all at your disposal. The sounds on both pianos fall under similar categories such as electric and acoustic pianos, synths, organs, and even some strings and bass voices. However, the main difference is the variety you have on the P-125.

Since the P-125 has a more varied sound library, it’s also the more versatile model between the two. When you’re a beginner, you might benefit from lesser voices, which is why the Recital Pro is a popular choice for a first digital piano. However, as you progress, you’re going to need more variety to find the right sound that reflects your personality and style, which is exactly what you’ll find on the Yamaha P-125.

One of the areas where I couldn’t decide on a winner between the two was in terms of piano features. Both the Yamaha P125 and the Alesis Recital pro came with a bunch of different features, effects, and other characteristics that would make them great fits for any pianist. In fact, both of these models have the exact same playing modes and offer a very similar range of effects, which is why they were tied in this category.

As I mentioned earlier, both of these pianos come with the same playing modes. These modes are: split, dual, and duo mode. As a pianist, you’ll probably find a ton of different applications for all these features, which is what makes both of these models legitimate workhorses that can work for both beginners and novices alike.

With split mode, you can divide the piano into two different zones with different voices. For example, you can load a bass voice on the left side and a piano voice on the right side. From there, you can play walking bass lines on your left hand while piano comping with chords on your right hand. It will sound like there are two people playing different instruments, when in reality, all the sounds are coming from one musician.

With dual mode, you can blend two different voices together. This gives you a unique tone that you won’t be able to find anywhere else. On top of that, you can even tweak the mix level of the different layers in this mode, giving you a lot of control over your tone. This is very useful for accompanists and people who like experimenting with different sounds and allows for a whole lot of experimentation.

With duo mode, the piano is separated into two mini keyboards with the same voice. This is designed for piano lessons or duets, so that each side has the exact same tuning. That way, the teacher can play along and demonstrate different piano techniques to the student without crossing over to each other’s side.

Additionally, both pianos offer recording modes. That means you can record your own playing and listen back on it to determine areas of improvement. However, the Yamaha P-125 does this slightly better as you can record two tracks as opposed to only one track on the Alesis Recital Pro.

Both of these models offer MIDI connectivity, which is a huge plus. The reason this is a very valuable feature is that you can connect the pianos to your computer via a USB to control virtual instruments or use piano learning apps that use MIDI. However, the one downside to both of these pianos is that they don’t offer BlueTooth MIDI connectivity. While it isn’t a requirement, BlueTooth MIDI can eliminate the need for wires, which can greatly help with organization.

The real area where this makes a difference is when you’re using the sustain pedal or using dual or split mode. And even then, it can still be hard to max-out the 128-note polyphony on the Alesis Recital Pro.

So, while the Yamaha P-125 definitely has better polyphony than the Alesis Recital Pro, they are still tied in this category because of how little of a difference it makes to your actual playing. With that said, if you want that extra cushion when it comes to polyphony, the Yamaha P-125 offers more versatility and flexibility.

These pianos are in two completely different price ranges and are made by two different brands. With that said, these models still share a fair amount of similarities. For example, the Yamaha P-125 and Alesis Recital Pro are both portable keyboards with 88-keys. This is the same number of keys you’ll find on an acoustic piano, which offer more realism, making both of these options great for novices and beginners alike.

Another major similarity is the playing modes. Despite the higher price tag on the Yamaha P-125, both of these pianos share the same playing modes and a lot of the same piano features, which is a huge point in the Alesis Recital Pro’s favor.

When testing out both of these pianos, the last similarity I noticed was also a point towards the Alesis, and that is the key texture. Whenever I test out digital pianos, glossy key texture is one of the major letdowns for me, which is what both of the models had. However, since the Alesis Recital Pro is the more affordable model, I found it easier to forgive the glossy texture on the Alesis than the Yamaha P125.

While both of these pianos are great options for their price, the Yamaha P-125 offers way more versatility, which is arguably because of the higher price. While the Alesis Recital Pro will serve any beginner very well, the Yamaha P-125 is the better investment because it will probably last you longer on your musical journey.

Quick Rundown Of the Yamaha P125