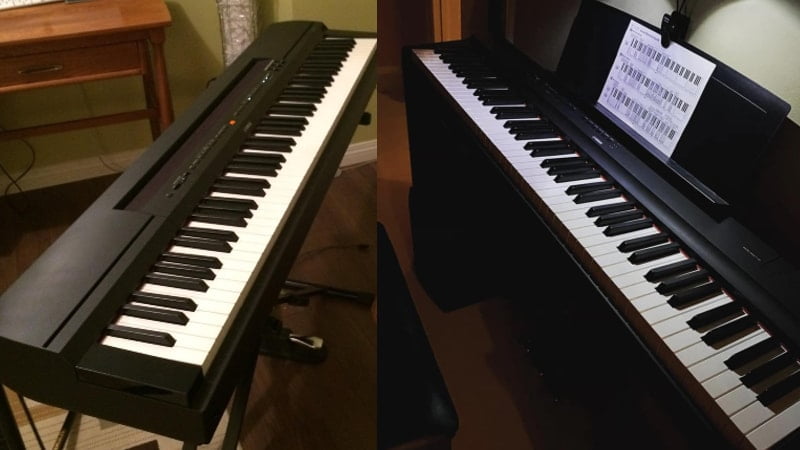 Comparative reports on Yamaha P-255 vs P-125 are closely contested since both are favorably upgraded. But affordability gives the latter the upper hand for beginners.

Yamaha has one of the most enviable arsenals when it comes to digital pianos. Among these, the P-series (Portable) is considered by many as the best when it comes to functionality and, more importantly, competitive pricing.

The two models featured in this review, Yamaha P-255 vs Yamaha P-125, are huge favorites among beginners. Aside from the pretty impressive feel and sound of these digital pianos – great enough even for mid-level players – the two are lightweight, portable, and incredibly affordable.

After numerous revamps over the years (P-125 was P-115 and P255’s successor is the P515), the company is always trying to come up with new design ideas to be competitive with the time and other brands. And this is clearly obvious with their results

The question now is, which of these is the better choice – especially for those who are planning to get their own piece for home practice and even for gigs or performances in front of a crowd?

Just by glancing at the table provided above, anyone can see that there are very few differences between the two Yamaha portable models – especially where it matters.

In terms of outward appearance, the P-255 is larger and heavier weighing over 38 pounds compared to P-125’s 26 pounds. The design features are pretty much the same too, with the control dashboard positioned above the keyboard. Perhaps the most obvious disparity is the number of speakers – both have upward-facing speakers directed at the player but the former has two additional amplifiers at the back.

But what’s inside matters more. And while there isn’t a lot of variance between the two, the actual disparities carry a lot of weight in determining which comes out on top.

After a very meticulous assessment of these digital pianos, I personally go for Yamaha’s P-125 over the presumed higher-model P-255 2:1;because of the lack of differences and, perhaps more importantly, because of the price tag.

But if you want to know more specifics, do read on.

While the P-125 came a bit later than the P-255 as the successor to the P-115, Yamaha did not really make a whole lot of changes to it in this regard. While both are equipped with the same hammer action and touch sensitivity, the actual keys on the latter is of higher quality, furnishing it with the same feel as more expensive models.

The Graded Hammer System is Yamaha’s most basic hammer action, often used for their beginner-level digital pianos like the P-255 and the P-125. Aside from being sufficiently weighted, these are aptly weighted just like real acoustic uprights and grands with the bass keys on the left-most part of the keyboard having heavier pull than the trebles on the right-most side.

This particular function refers to the volume and (more importantly) expression that is produced when the key is pressed – the sound is soft and lilting when softly touched and loud and resonant when pounded hard. All P-models, including the two reviewed here, have four settings available: Soft, Medium, Hard, and Fixed.

This feature is where the P-255 becomes a better option than the P-125. The former’s keytops are made of synthetic ivory with moisture-absorbing capabilities that satisfactorily prevents the fingers from accidentally slipping. The latter’s plastic keytops may be laden with a matte material which also increases friction, but nothing beats the feel of ivory under one’s fingertips – even faux ones.

Priced at almost two thousand bucks, I was really hoping for a better sound engine and a wider sound library on the P-255. Unfortunately, it has essentially the same specs as the P-125 in this regard.

The two P-models are tied in this section only because they have the exact same features; but the P-125 is my personal choice if its price tag of less than $1000 were to be included in the mix.

While most models from the P-series make use of the basic AWM sampling, these two are outfitted with the Pure CF Sound, generated from the world-class Yamaha CF grand pianos.

However, there are three functions added to the P-255 which makes it slightly better than the P-125: Key-off sampling, sustain sampling, and string resonance. Without going much into detail, these three help create piano sounds almost similar to real acoustic ones.

With a whopping 24 voices, both the P-255 and the P-125 do not disappoint. The list includes a grand piano section, electric pianos, organs, vibraphones, strings, and bass.

Because the two are outfitted with the Pure CF tone generator, the grand piano instruments on both are no less than stunning. I do have to say that I was a bit more awed by the strings on the P-255, with the individual notes blending incredibly well. Its bass section is also wonderfully made.

The P-255 does have an edge over the P-125 in this category, thanks to its higher polyphony count and more powerful speaker system. Usually, that’s enough to make me gush over a digital piano. However, that’s a very tiny edge here, in my opinion. Aside from the sheer similarities in other features and functions, it’s really hard to ignore the disparity in price.

This feature is defined as the number of notes which can be played at once. The digital pianos in question are outstanding in this regard, with the P-125 having 192 and the P-255 having a massive count of 256. In fact, anything over 100 is already a great piece, especially for beginners. But the P-255’s count is the same as a Clavinova already – and that’s a huge treat even for expert musicians.

Both the P-255 and the P-125 share the often-required playing modes: Lesson, Layering, and Split. The first one is a must-have for beginners since this allows them to practice with their tutors.The last two are great for intermediate-level players who like to experiment with music, especially when mixing two or more instruments together for a composition.

The two share the same basic effects including four types of Reverb, Sound Boost, and Damper Resonance, just to name a few. Aside from the additional functions that enhance the P-255’s sound engine, Yamaha sprinkled a few more to it like the Rotary Speaker, Phaser, and Tremolo or Auto Pan.

Apart from the numerous preset songs on these digital pianos, it is possible to record additional tracks – an awesome function especially for those who want to listen to their practice sessions or new compositions.

Both the P-255 and the P-125 can record two tracks as a standard MIDI file. However, only the former can save files on an external drive.

The P-255 is ahead of the whole P-series pack in this aspect, having four separate speakers (two facing up and two facing the back/audience), making it a great stage digital piano. On top of that, there is no sound distortion heard at full volume – a real feat for Yamaha to effectively execute.

The two usually come with a music rest and a foot pedal in the set.

As I have voiced several times, the two are matched in almost every single feature – from the very important hammer action and tone generation to the less noted playing modes and connectivity concerns.

It is undeniable that the P-255 is packed with amazing add-ons, particularly the three awesome functionalities on the sound engine and the synthetic ivory keytops. While more accomplished players would appreciate such wonderful extras, the truth is expert pianists would also choose a higher Yamaha model which has better features but are at the same price range.

The numerous uniformities yield to one conclusion: the Yamaha P-255 vs P-125 bout basically boils down to a tie. And if I were a beginner or intermediate-level player, I would go for the more affordable option.

Quick Rundown of the Yamaha P-255

Quick Rundown of the Yamaha P-125