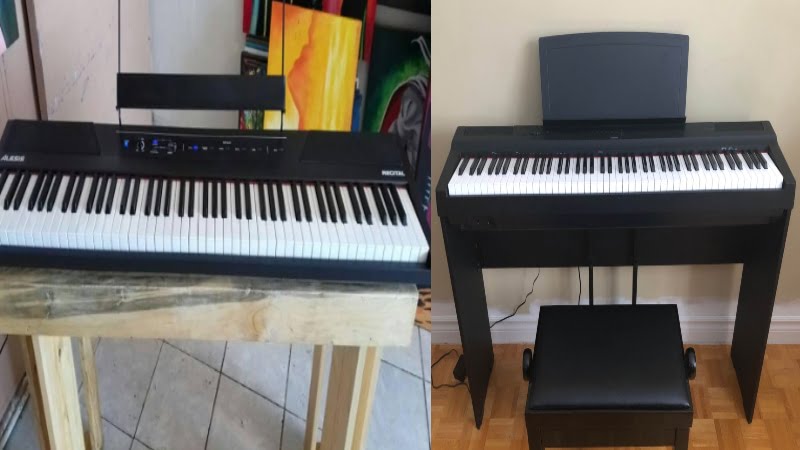 Digital pianos come in different shapes and sizes, and more importantly, price points. The featured pianos in this report – Alesis Recital Vs Yamaha P125 – are two pieces that represent the huge disparity in cost. A huge favorite among beginners on a budget, the former only costs a little over $200. The latter, on the other hand, has a price tag of nearly $1000.

Yamaha, known for manufacturing exquisite acoustic grands for over a century, have wowed many professional musicians with their digital pianos. Their P125, an upgrade from the discontinued P115, is a very good example of this. The biggest trouble with it is its hefty cost.

Alesis, a newcomer in the industry, is transforming conventional ideas that piano playing is only for the elite by offering high quality pieces at surprisingly low prices. It’s no wonder why thousands choose this over big names like Yamaha, evidenced by its humongous sales on online shopping sites like Amazon.

But which really is the better digital piano between the two? And, more importantly, which should you own?

For most people, one of the most important considerations in shopping for practically anything is the price. The affordability of the Recital by Alesis is, hands down, its most attractive feature. But it also does not completely disappoint in many functions. The Yamaha P125 is a beautiful piece; but many take a pass at buying it because of its price tag.

To make a fair assessment, I’ve decided to set aside the cost for a while and instead look under the hood and compare and contrast the technical details of these two digital pianos. And from what I have seen, the Yamaha P125 holds up better than the Alesis Recital 3:1.

Top of the line acoustic uprights and grands have a very specific feel when the keys are tinkled with. Aside from the actual texture of the ivories and ebonies, the feel of the keys pulling on the hammer to strike the string is also quite distinct. This is what manufacturers try to duplicate when they make digital pianos. Some succeed, some fall short of expectations, and others don’t even try.

Alesis did not make the attempt to fully recreate acoustic pianos with their Recital. Yamaha worked extra hard to do this with their P125.

The Alesis Recital has semi-weighted keys, an obvious attempt to simulate the authenticity of acoustic keys with the budget still in mind. This is a huge no-no for many professional musicians but beginners won’t mind.

On the other hand, Yamaha impresses with their GHS or Graded Hammer System because it does mimic the pull on the hammer of the real thing. On top of that, they added the transitioning heaviness from the bass to lightness of the trebles.

This function adds to the realism of the playing experience because, in acoustic grands, the pressure you put on the keys also affects the intensity of the sound produced. Both the Recital and the P125 have touch sensitivity options that can be adjusted to the user’s liking.

The Alesis Recital’s keys are made from non-coated plastic, expected of the $200 price tag, to be honest.

This is where Yamaha let a lot of people down. As a supposed P115 upgrade, many were hoping that the keys would get the improvements needed to add to the realistic experience. That, extremely unfortunately, didn’t happen.

If there is one thing that Yamaha is really great at, it’s designing instruments that create clear and vibrant sounds. And it’s hard for any newcomer, Alesis included, to match the experience that Yamaha has under their belt.

Yamaha’s excellent acoustic grands are the backbone of their digital pianos’ sound engine. The P125 makes use of the Pure CF sound engine, a huge improvement from the P115’s 1980’s AWM or Advanced Wave Memory technology.

To be fair, Pure CF and AWM are basically sampling – recording several demos of an instrument and then combining all these together into an encyclopedia of sounds. Sampling is what Alesis uses for the tone generation of their Recital. But what really sets the P125 apart is the use of the Yamaha CF grand – one of the most admired pieces all over the world – reproducing its brilliant clarity, vibrance, and depth in a smaller and portable instrument.

Alesis Recital has a good enough number of voices: acoustic piano, electric piano, organ, synth, and bass. To be honest, beginners who need to practice the basics just need the first one. However, this collection is too limited for experimentation.

Yamaha P125 has a whopping 24 voices – different kinds of grand pianos, electric pianos, organs, vibraphones, strings, and bass. The varied options allow professional musicians – especially those who go on gigs – to perform different kinds of music and work on their compositions.

This is something most people consider as useless, thinking these pre-recorded tracks are something to just listen to. But with the right functions, these can actually be helpful for newbies who want to learn playing certain pieces even without a tutor.

Compared to the very limited number in the Alesis Recital, Yamaha P125 has dozens from renowned composers like Brahms and Bach. On top of that, the tempo can be adjusted so users can really follow the notes carefully.

For its amazing affordability, the Alesis Recital actually delivers in this chapter. To be perfectly succinct, I personally have no complaints about it. Despite that, Yamaha still tops the efforts of Alesis as it has packed several more features and functions in the P125.

For a $200 digital piano, it’s awesome that the Recital has 128 max polyphony. The $500 P115 of Yamaha has less than a hundred, truly a disappointment for many. This is one of the improvements the company made on the P125, as it has 198.

Alesis has given the Recital two basic digital effects: Reverb and Chorus. That’s enough for most musicians, myself included.

Yamaha bumped this particular feature up another notch for the P125. Aside from the four different Reverbs, the company added Damper Resonance, IAC or Intelligent Acoustic Control, and Sound Boost.

Yamaha’s P125 has a built-in recorder. This is a great feature since beginners can listen to their practice runs and composers can immediately hit record when a tune or a progression comes to mind.

The Alesis Recital does not have this capability. But like most entry-level digital pianos, it is still possible to capture tracks by connecting an external device (a computer or a phone) via the USB input.

This is the feature where the Alesis Recital wins over its Yamaha competitor. Beefed up with two 10W woofers and two 20W tweeters, this provides great enough amplification without the need for external speakers even when performing in a small room with an intimate audience.

Yamaha definitely outfitted the P125 with a better speaker system than its predecessor. First, it is more powerful at 7W each. Second, there are four speakers – two facing up and two facing down. These provide a more expansive stereo sound but are still objectively less potent than the Recital’s.

Yamaha’s P125 has the following in terms of connectivity: 12V DC IN, two standard headphone jacks, pedal input, AUX out of external speakers, and a USB MIDI for external devices.

The Alesis Recital almost has the same that are listed above with the P125. Unfortunately, the pedal is bought separately – quite a letdown when this is quite important. The plus point about the Recital is that it is battery-powered, making it truly portable. However, the D-batteries required are almost impossible to find so grab at least six of these when you find it.

There are a few similarities between the Alesis Recital and the Yamaha P125. I have already mentioned two above: they have the same plain plastic key texture and essentially makes use of sampling for their tone generation.

The two also have their own smartphone apps. Yamaha has the Smart Pianist, considered to be the best in the industry right now, and is a must-have to unlock more features and functions. Alesis partnered with Skoove so Recital users are given three months free membership to their premium program that provides lessons and other freebies helpful for beginner piano players.