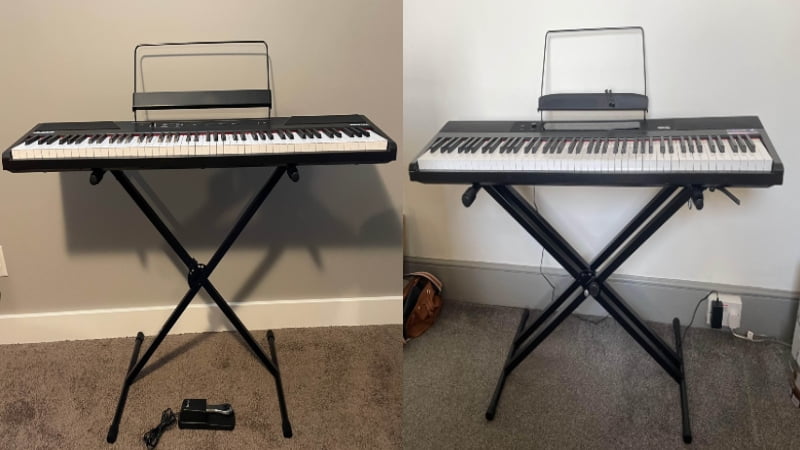 See why a lot of musicians lean towards Rockjam’s entry-level piece over the equally-popular Alesis contender in this Alesis Recital Vs RockJam 88 face-off.

First-time piano players and musicians are somewhat luckier these days compared to those a decade or two ago because low-cost digital pianos are conveniently up for grabs. Brands like Alesis and RockJam are manufacturing outstanding pieces that could almost match the quality of Yamaha, Kawai, and Casio.

The Recital from Alesis and the RockJam 88 are two of the cheapest entry-level models in the market right now. And it’s hard to ignore these two when they are packed with functions and features and fairly priced at just a little over $200!

The question now is which of these two should keep you company in your piano journey?

Admittedly, the two are somewhat similar in basic features. And while Rockjam was able to incorporate so many more into their ultra-compact beginner piece, the efficient simplicity of the Recital is notably better. So in this Alesis Recital Vs. Rockjam 88 comparative report, the former comes out on top. 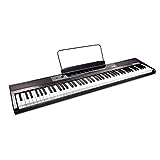 To be perfectly honest, the Alesis Recital and the RockJam 88 aka RJ88DP still lack the design and manufacturing finesse of some more prominent brands. Then again, this doesn’t seem to matter to thousands of beginners all over the world because both these models are selling like pancakes (and are even currently unavailable on popular online stores). At $200 a piece and crammed with features that could be very helpful for aspiring musicians, there is almost nothing to complain about.

But intermediate and advanced piano players find these two wanting; and the RockJam 88 even more so. After reviewing the specs in full and playing these two side by side, I would have to agree. My final rating is 2:1 in favor of the Recital in the Alesis Recital Vs. Rockjam 88 review.

As aforementioned, many have commented that the Alesis Recital and the RockJam 88 failed in this aspect. While the two have the complete 88 keys, these are made from plastic without making any attempt to add texture to it and are merely semi-weighted. Thankfully, both have touch sensitivity, which really helps add a bit of realism to one’s piano playing experience.

The two companies didn’t specify the system they used for the weightedness of the keys for these models so I assumed that they use the most basic procedure: the use of springs with weights.

There are numerous entry-level digital pianos that are equipped with weighted and graded keys. However, most of these are already at the $500 mark. For those who have budget constraints, these two are passable.

The Recital and RJ88DP both have four levels of touch sensitivity; making these two yet again equal in this aspect.

The ebony and ivory keys of both Recital and RJ88DP are made of untextured plastic which causes the fingers to accidentally slip, especially when more complicated pieces are being played.

Although the choice for material for their keys is dismal, it is also expected. Even the entry-level digital pianos of Yamaha and Korg (which are way more expensive, I have to add) are made of this disappointing material.

The tone for these two models are decent at best and, to be frank, there is still room for improvement in this aspect.

At first glance, the sound library of RockJam 88 has more offerings than the Alesis Recital. While that is enough for some to consider the former a better option, the latter’s overall sound has more clarity and depth. Since that matters way more in my book, this point definitely goes to the Recital.

No specifics were provided when it comes to the sound engine used by Alesis and Rockjam but they do use the most basic system for capturing sound – Sampling. For those who aren’t familiar with this process, it involves recording different tones of one note, combining all samples into one, and then ‘uploading’ that to the digital piano’s tone generation software.

Alesis did pretty well with their sound engine, creating clear and rich tones that almost matched that of big named brands. RockJam isn’t too bad either but the tones can be a bit muddy at times, especially at top volume which is unfortunate.

RockJam 88 beats the Alesis Recital in this aspect as it has ten voices and demo tracks compared to the latter’s five voices and two demos.

Aside from the usual grand piano and electric piano, the voices included in the RJ88DP can create a full band sound since it has bass, guitar, and drum kits. I still appreciate that the Recital has strings as an option which can be nicely mixed with the grand acoustic voice to come up with that splendid orchestral sound.

This is the facet where RockJam really put in the extra effort, beefing up their 88-key digital piano with so many features and functions that many popular companies seem unable to do. Granted, Alesis Recital does not lack the basic functions and accessories. But because RockJam has packed so much in their compact piece, it wins here big time.

This particular feature is the maximum number of notes which can be played simultaneously. Surprisingly, both the Recital and the RJ88DP have max polyphony of 128. I’m amazed and incredibly pleased that the manufacturers can do this and price their models at $200, since some top brands have the same offerings for much steeper prices.

All these playing modes are truly beneficial to beginners. The Lesson Mode makes piano lessons easier and the Layering and Dual modes allow them to experiment a bit with their practice pieces and compositions.

However, I’m giving an additional point to RockJam because the volume of the voices, especially for the Dual Mode, can be adjusted independently. So if you want the grand piano to rise above the guitar or the synth sounds, it’s possible!

At first glance, it may seem that the RockJam 88 has beaten the Alesis Recital in this aspect. The latter has more formidable 24W built-in speakers while the Alesis only has 20W. The truth is, both are so powerful that external amplification isn’t needed when performing in a small room.

However, the sound output of the RJ88DP isn’t rich enough and actually lacks warmth compared to the Recital. With that considered, Alesis did better because sound quality is more important in my estimation than volume.

Fortunately, the two models are equipped with all must-have inputs for headphones, pedals, and USBs. They even have AUX outs for amplifiers, mixers, or recorders.

This is where the RJ88DP garners a lot of points because they added more to those basics. First, they have two headphone ports – one at the back and one in front. Next, they have two USBs – one type A and a MIDI. They also have an AUX in for a phone and a port for a microphone.

Out of the box, the two digital pianos have power adaptors, music rests and free subscriptions to their individual music apps. RockJam 88 (yet again) added more extra with phone or tab clips and keyboard details stickers that can help beginners find where the middle C is. Sadly, the two disappoint in the most important digital piano must-have: a sustain pedal. Both do not have this in the set which means users will have to buy this separately.

Alesis Recital Vs RockJam 88: The Similarities

Barring all the extras RockJam added to their RJ88DP, it matches up well with Alesis’ Recital in so many aspects.

Physically, the two are compact and portable – important for digital pianos. I like the no-nonsense, more organized appearance of the Recital better but I can live with the RJ88DP.

The two are impressive in several facets under the hood, from playing modes to free music app subscriptions. The two also fell short in the same aspects such as the playability and the sound engine. Even the good trait of battery-operability is marred by the fact that it requires 6D batteries – the type that is so hard to find.

But here’s the truth: it would have been near impossible to find a low-cost digital piano which feels and sounds like an acoustic grand many years ago. Luckily for many beginners, newcomers Alesis and RockJam have found a way to make music more accessible to everyone.