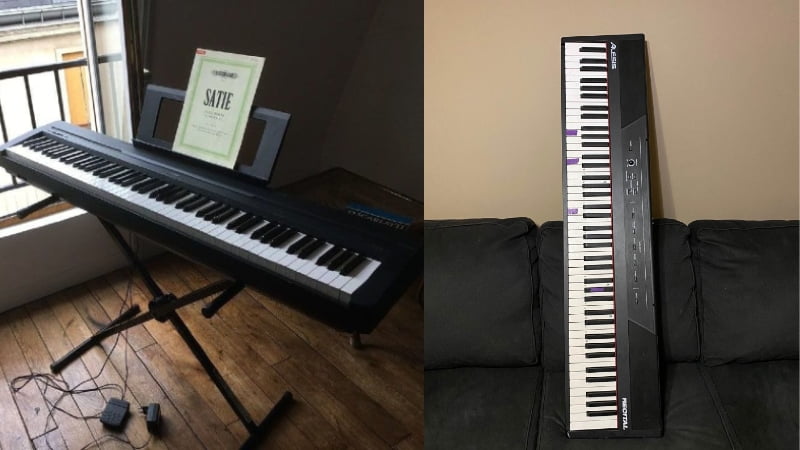 After sizing up all related attributes, the modestly-priced Recital offers way more, ergo the better option, in the Alesis Recital Vs Yamaha P45 match-up.

There are over a dozen low-cost digital pianos from different brands to choose from today. And while these are specifically made for beginners, many companies have decided to beef up their offering to produce almost the same feel and sound of an acoustic upright.

Two of the most favored pieces are the Recital by Alesis and the P45 by Yamaha, evidenced by the number of sales in the recent past. While the latter is backed by the century-old experience of Yamaha in piano manufacture, the former’s edge is its affordability.

There is no doubt that these two are great options for newbies: full 88-keys, acoustic simulation, relatively lightweight, and not heavy on the pocket. But the pressing question here is which gets more points in the Alesis Recital Vs Yamaha scoreboard?

Alesis’ Recital and Yamaha’s P45 are popular options among beginners but for very different reasons.

For over one hundred years, Yamaha has built a reputation for creating high-quality and long-lasting musical instruments.. The P45 is packed with excellent features that Yamaha is known for. Then again, it is an entry-level piece so it does fall short on certain aspects.

Admittedly, more people go for the Alesis, not for its name (it’s a newcomer in the industry) but for its price. The $200 or so price tag on the Recital is irresistible. However, this particular model surprised me with its features and functions.

Alesis’ Recital wins by just a tiny bit with a 2:1 ratio. Read more to find out why I gave the trophy to the less illustrious pick.

Yamaha has had a whole lot of time to perfect the mechanism of their digital pianos, and it shows in the P45. If it’s realism that you want under your fingers, you’ll definitely get that with the fully weighted keys and even that slight escapement on the Yamaha. The Recital’s keys are semi-weighted, but it’s not as remarkable as its rival; that’s why this point goes to the P45.

Yamaha makes use of the proprietary Graded Hammer Standard (GHS) hammer action. The ‘graded’ part refers to the variation on the keys’ weight – heavier on the bass and lighter on the trebles. They also included the escapement feel on the P45, which adds to its realism.

The Recital only has semi-weighted keys. This flaw isn’t a bad thing, per se, and some actually prefer this. But if your goal is to practice on the digital piano to play just as well on a concert grand, the P45 is the better option in this regard.

The pressure you put on the keys is directly proportional to the volume of the sound that comes out. Since there are different acoustic pianos, companies have started to add touch sensitivity to their digital offerings.

The P45 has four levels – Hard, Medium (the standard), Soft, and Fixed. The Recital has three different intensities and an ‘off’ option.

There is no perfect entry-level digital piano, and this particular facet exemplifies that well. The two companies economized here by using smooth plastic keys. Sure, the P45’s ebonies are matte, but this does not greatly impress at all.

Aside from the Feel, the Tone is another vital component in digital pianos that potential buyers should note. I tagged the P45 of Yamaha as the winner here mainly because it uses better technology. But this is in no way a disparagement to Alesis’ Recital’s features. It may have less but considering its price, you’re still getting a good deal.

A lot of companies make use of Sampling as their method for tone generation. This is essentially recording the sounds from an actual acoustic instrument and then storing that data into the digital piano.

The Alesis Recital has no particular moniker to their sound engine, but I find it clear and brilliant enough for my taste. They also added natural decay to the tones, which produces a surprisingly authentic sound.

On the other hand, Yamaha makes use of the AMW (Advanced Wave Memory) Stereo Sampling. I won’t go into ultra-technical details, but this involves more steps in the recording and recreation of the sound, resulting in richer and more detailed tones.

The P45 has ten voices which include several pianos and other instruments. The number is limited for a Yamaha but the company did ensure quality for the pianos and strings. I don’t care for the organ that much and the harpsichord is dismal.

The Alesis Recital only has five – acoustic and electric pianos, an organ, a synth, and a bass. Despite the short supply, there is very little to complain about the quality of the Recital’s voices.

While the Recital falls short compared to the advanced systems Yamaha used for the hammer action and sound engine, Alesis satisfies users in other features and functions detailed in this chapter.

This feature is defined as the number of notes that the piano can play at a single time. And this is where Yamaha’s P45 greatly disappoints, with only a maximum of 64. Some say this is enough for beginners, which is a fair point, but similar models from other brands already have over a hundred.

A good case in point is the Alesis Recital. It has a max polyphony of 128, a remarkable feature for a $200 digital piano.

These digital pianos have the must-have functions: metronome, transposition, and – as mentioned earlier – touch sensitivity.

The two also share some playing modes crucial to learning. The first is the Twin or Lesson mode, which divides the 88 keys into two 44-key pianos so that the tutor and the student can play side-by-side. The second is the Layering or Dual mode, which allows the piano to play two different voices when a key is pressed.

However, the Recital has one mode that the P45 doesn’t have: the Split mode, which bisects the piano into two sets of 44 keys, allowing each side to play a different voice.

The Alesis Recital also walks off with another point here because it has more substantial amplification with two 10W power. On top of that, the speaker cones are located on top of the piece. The Yamaha P45 only has two 6W power, and worse, its speaker cones are downward facing.

It’s a bit of a toss-up in this particular factor because the P45 lacks some connectivity capabilities while the Recital lacks essential accessories.

For instance, Yamaha failed to include an AUX out, which is needed in this model since it was not outfitted with powerful speakers. On the other hand, it’s odd that Alesis didn’t include a pedal in the set.

Although one would not mistake the Recital for the P45 at first glance, the two are pretty much alike in the most important physical attributes. I find the Alesis offering a bit heavier, but generally speaking, these two are lightweight and compact, therefore portable.

As already described in a few chapters above, these models from Alesis and Yamaha share similarities under the hood as well. First of all, the entire 88-key set-up is weighted. Next, the specific method of recording the sounds for tone generation may have different names, but both essentially make use of sampling. The two also have the same basic effects, functions, and playing modes – all incredibly helpful for

The truth is most people choose based on what they like – what feels greatl under their fingers and what sounds good to their ears. But if you’re a savvy shopper, it’s best to take the tech and the price tag into consideration.

When all things are considered, the Amazon-exclusive Recital with all its features, functions, and $200 price tag gives more value for money than the P45, which goes over the $500-mark. If you’re dead set on getting a Yamaha, go for a higher model instead.