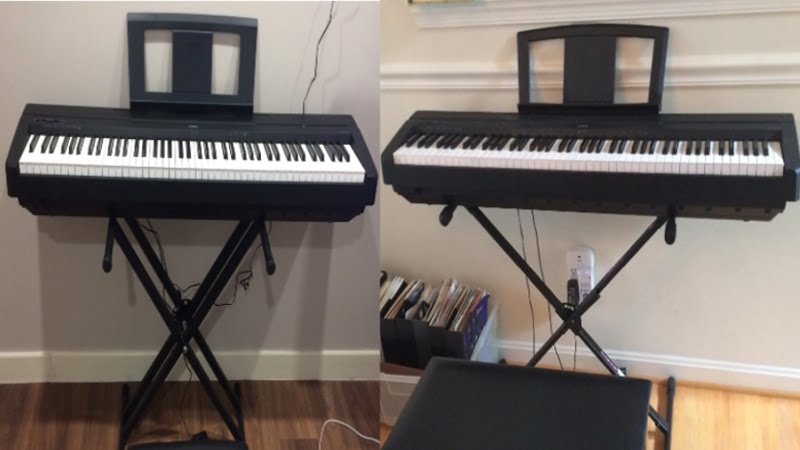 The Yamaha P-35B vs P45 have a lot of similarities, but which one is the better pick? Find out in this article.

At first glance, the Yamaha P-35B and the Yamaha P45 seem identical. They have the same tone generator, design, weight, and even speaker size. So, if you’re choosing between the two, it can be hard to figure out the best one for your needs.

The P-35 is the predecessor to the P45, so it makes sense that they share many features. After all, the P-35B is a great Yamaha piano available on a budget. However, there are a few key differences between the two that make the P-45 a better pick.

In this P-35B vs P-45 review, I’ll be sharing all the features of both pianos and highlight their differences. That way, you’ll know what updates Yamaha applied to the P-45, making it easier to choose the best piano for you. 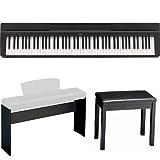 Figuring out which model is better between these two pianos wasn’t easy. This is because both pianos share many features that make them seemingly identical at first glance. But when I dug deep into the features, I noticed one key difference that set put the Yamaha P-45 a bit higher than the P-35B.

The final score at the end of this comparison was 3-2, so you can tell that this was a very close comparison. Keep reading to learn about the main reason why I found the Yamaha P-45 to be the better piano.

Whenever I test a digital piano, the first thing I check out is the tone. And with these pianos, I noticed that the sound libraries and sound quality were identical. In fact, when I dug deeper, I found that they have the exact same tone generator and sound library, so there was no way I could choose a winner between the two.

The tones from both pianos come from the AWM Stereo Sampling generator. As you might guess, this tone-generation method utilizes samples. Like many pianos in this price range, the Yamaha P-35B and the P45 are loaded with specific recordings of different instruments. And whenever you press a key, you trigger one of these samples.

That said, you might also notice that both of these pianos produce higher-quality tones than others in the price range. This is because the AWM Stereo Sampling method uses samples recorded in stereo, which means the sounds have much more depth and detail.

When doing a tone test with both pianos, I found that the AWM Stereo Samples produced much more realistic tones compared to others in their price range. So, if you want a budget digital piano that can replicate the sound of an acoustic piano, both of these instruments will serve you well.

These two pianos have the same sound library. And while it isn’t the most varied sound library on the market, it is definitely all you’ll need. If you’re a beginner or novice piano player, you’ll find that these instruments contain all the basic voices you’d expect from a digital piano.

To start, both pianos have a collection of piano and electric piano voices. That way, you can play both classical piano and modern music. On top of that, they also feature strings and organ voices to give you more variety.

All in all, these pianos have 10 voices each. Again, this isn’t the most versatile sound library, but it contains all the basics.

Another huge similarity between these two pianos is how they felt. If you blindfolded me and asked me to play both pianos, I wouldn’t be able to tell the difference. That said, rest assured that both pianos still produce a realistic feel that beats many in their price range.

One of my favorite features of both pianos is the hammer action. This is because the Yamaha P-35B and the P45 utilize the Yamaha Graded Hammer Standard or GHS. This is one of the best hammer action systems available in this price range, as it can replicate the subtle weight difference you feel when playing an acoustic piano.

So, the bass keys have a bit more weight than the higher keys. This is how a real acoustic piano is set up, and it’s very nice that Yamaha captured this very small detail in their budget digital pianos.

On top of that, these pianos have varied touch sensitivity. This means that the piano will react to how strongly you press on the keys. So, if you press lightly on the keys, you’ll produce a delicate and quiet tone. And if you want to produce a heavier and more emotional sound, you can press down harder on the piano.

Regarding key texture, I found both of these pianos falling short. This is because they don’t have textured keys at all. Instead, the pianos feature glossy plastic keys that have a slightly slippery feel to them.

Now, I didn’t expect these pianos to come with wooden keys since they’re on the more affordable end of the spectrum. But when playing these pianos, the plastic and slippery texture stood out to me. This isn’t that big of a deal, as most beginners and novices won’t notice the difference, but it’s definitely something to keep in mind before buying one of them.

The main reason the Yamaha P45 won this comparison was because of the piano features. The Yamaha P45 has a much better polyphony than the P-35B, which allows you to be more expressive and experiment more with the piano. And for that reason, I declared it the winner.

Both of these pianos come with the same playing modes. They both feature dual and duo modes, which are very useful for beginners. When you turn on dual mode, you can blend any two voices on the piano, creating a unique tone.

With duo mode, you divide the piano into two smaller keyboards. That way, you and another person can play together as if you had two individual pianos. While this mode was primarily designed for piano lessons, it’s a great feature to use for piano duets as well.

The higher the polyphony, the more notes you’ll be able to play at the same time. And while you can only press on ten notes at a time, keep in mind that if you have the sustain pedal on or if you’re using dual modes, you will be playing more samples than you realize.

Yamaha P-35B vs P45: The Similarities

These pianos have a lot of similarities. They share the same design, weight, sound library, and even hammer action system. This is because the Yamaha P45 is simply an updated version P-35B, which is already a good piano on its own.

So, Yamaha got all of the best features from the P-35B and corrected one of the only downsides: the polyphony.

If you’re choosing between these two pianos, I recommend spending the extra money for the Yamaha P-45. Even if polyphony is a small detail, it allows you to be much more expressive in your playing, which is important for many pianists.

Quick Rundown of the Yamaha P-35B