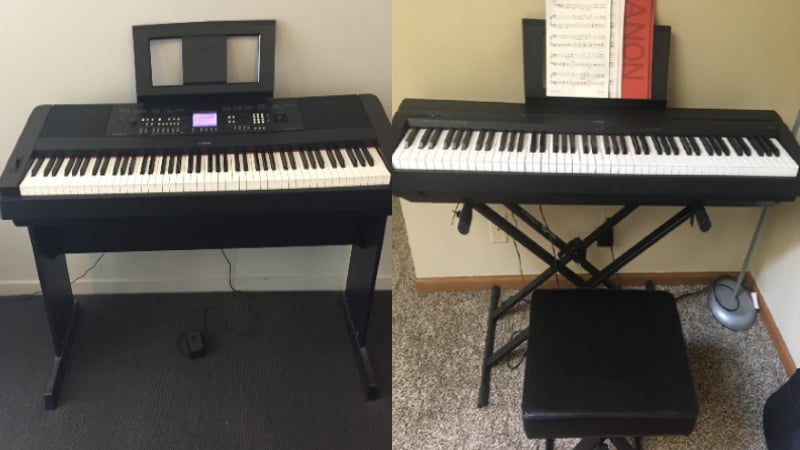 Does more expensive mean better when it comes to digital pianos?

Well, sort of. If you invest more money in a digital piano, there’s a fair chance you’ll get to access more features. However, it won’t be worth the extra money if you don’t need those features.

When I compared these two pianos, there was no doubt that the DGX-650 was the superior option. With better tones and more effects, the Yamaha DGX-650 gives you full control over your sound. But if you’re a beginner that doesn’t need these extra features, then you might be better off with the P45. 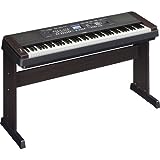 To compare these two pianos, I took a deep dive into their features. And by the end, I scored this comparison 3-2 in favor of the Yamaha DGX-650. The score was pretty close for such a wide price difference, which isn’t a knock on the DGX-650’s quality. Instead, this speaks more to the value that the P45 offers at a relatively low price.

While the DGX-650 has more premium sounds or features, the best piano for you depends on your needs. And in this section, you’ll learn more about these two pianos’ features to make it easier to find the one for you.

To start this entire comparison, I did tone tests. And because of the better sound engine, the DGX-650 produced much better tones. On top of that, it has a more flexible sound library than the P45, which is why it was the clear winner. But before you get too excited about the variety of voices on the DGX-650, there is a catch that I’ll explain in this section.

The Yamaha P45 uses the AWM Stereo Sampling method to generate tones. Basically, this piano is loaded with high-quality stereo recordings of real instruments, which you can trigger whenever you press a key. And compared to other pianos in the price range that use sampling, the tones are much better.

That said, it couldn’t compete as much with the Yamaha DGX-650, which uses the Pure CF Sound Engine, which is much more advanced. This model has real Yamaha CF Grand Pianos recordings to produce a realistic and very bright tone that you’d expect from Yamaha acoustic pianos.

That said, the DGX-650 only uses the Pure CF for its piano tones and around 100+ other voices. For the other tones in this piano, it uses the XGLite sound pack, which gives you variety but not that much quality.

When you get the Yamaha P45, you get 10 different voices. While this doesn’t sound like a lot, this is great for beginners. This piano has all the essential tones you need to develop your skills without loading it with too many voices that distract you.

Now, if you’re an experienced pianist, you might find the versatility of the DGX-650 more attractive than the P45. This is because the DGX-650 has over 150 tones from the Pure CF Sound Engine, 15 drums, and SFX kits, as well as 381 other voices from the XGlite sound pack. And while the non-Pure CF tones on the DGX-650 aren’t as good, you at least get tons of variety when playing this piano.

You’d usually expect the more expensive piano to come with better hammer action, but that isn’t the case with the Yamaha DGX-650 and P45. Despite the Yamaha DGX-650 costing almost twice the P45, I found that the feel on both pianos was almost identical.

The reason both of these pianos felt similar was that they use the same hammer action system. Both pianos feature the Yamaha Graded Hammer Standard or GHS. This system is designed to replicate the feel of a real piano by having the lower keys weigh slightly more than the higher keys.

This results in a very subtle but noticeable difference. Compared to other pianos with basic weighted keys, both the Yamaha P45 and the DGX-650 feel much better and more realistic to play.

This was yet another category wherein these two pianos were tied. While they came with different piano features, I found that the features target different types of pianists. So, I had to give the point to both pianos.

The Yamaha DGX-650 comes with split and dual modes, while the P45 comes with dual and duo modes. With split mode, you’ll be able to divide the piano into two distinct zones, each with its own voice or tone. That way, it will seem like you’re playing two instruments at once, which can come in handy when performing.

Dual mode blends two voices together. This allows for a lot of experimentation and also lets you develop a tone that’s unique to your style. This mode is available on both pianos, which is great.

One particular mode that caught my eye was duo or lesson mode. This mode is designed for beginners going through piano lessons as it divides the piano into two smaller keyboards with the same voice and tuning. That way, you and the piano teacher can use the same piano for lessons without worrying about pitch variations.

On top of that, this feature comes in handy when playing piano duets, as it allows you to seem like you have two different pianos while only playing one instrument. This is why I feel like the P45 is a great portable digital piano for beginners.

That said, even if the DGX-650 doesn’t come with lesson mode, the extra playing modes it does come with are great for live performances. So, if you’re a serious pianist starting to take the stage, bringing the DGX-650 with you would allow a lot of versatility in your playing.

The reason the score was so close when I compared these two pianos was because of they share a lot of similarities. This was quite a surprise to me, considering the price difference between the two. And while I still feel like the Yamaha DGX-650 is a great investment because of the sheer quality of the tones, keep in mind that it shares many features with the P45, which is available for half the price.

The first similarity is the design. These pianos seem different on the surface because the P45 doesn’t have a display, while the DGX-650 does. However, they share the same general design and weigh around the same. So, you won’t have a hard time bringing the piano to lessons or a gig.

Additionally, both pianos share the same glossy key texture. I was honestly not a fan of this as they feel slippery and unlike a real acoustic piano. This is more forgivable on the affordable P45, but it wasn’t something I expected from the DGX-650.

So, if you’re a beginner looking for a reliable piano that’s affordable, the P45 is a great pick. Even if it’s one of the cheaper Yamaha pianos, it offers a lot of features and value for the money.

But if you’re a more experienced pianist requiring more versatility, the DGX-650 is a worthwhile investment.

Quick Rundown of the Yamaha DGX-650