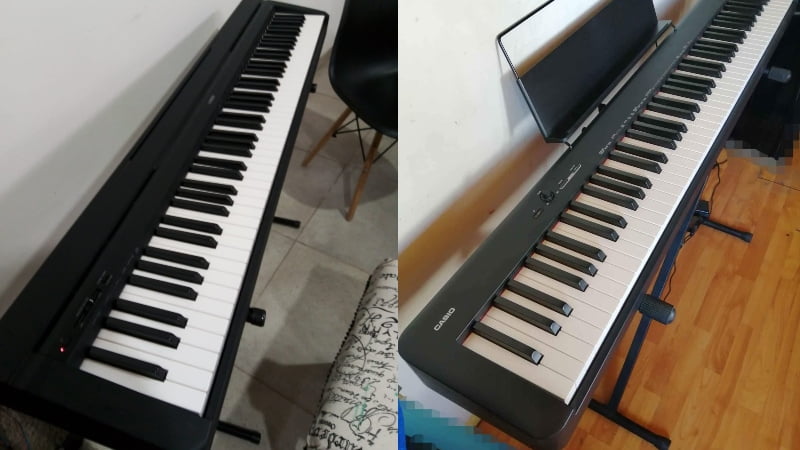 Trying the Yamaha P45 vs Casio CDP S100 is, in all honesty, a real treat. The two sound incredibly like the real thing considering these are pretty inexpensive.

The two are pretty much the same when it comes to sound and feel, so if you’re looking for a digital piano that simulates an acoustic one, any of these two works quite well.

Casio’s candidate looks excellent – compact and easy to carry around. The fact that it can be battery-powered is a superb addition.

On the other hand, the Yamaha contender has serviceable modes that facilitate learning. On top of its spectacular sound and realistic feel, these features are what make the P45 the better choice, in my opinion.

Get to know these two more below. 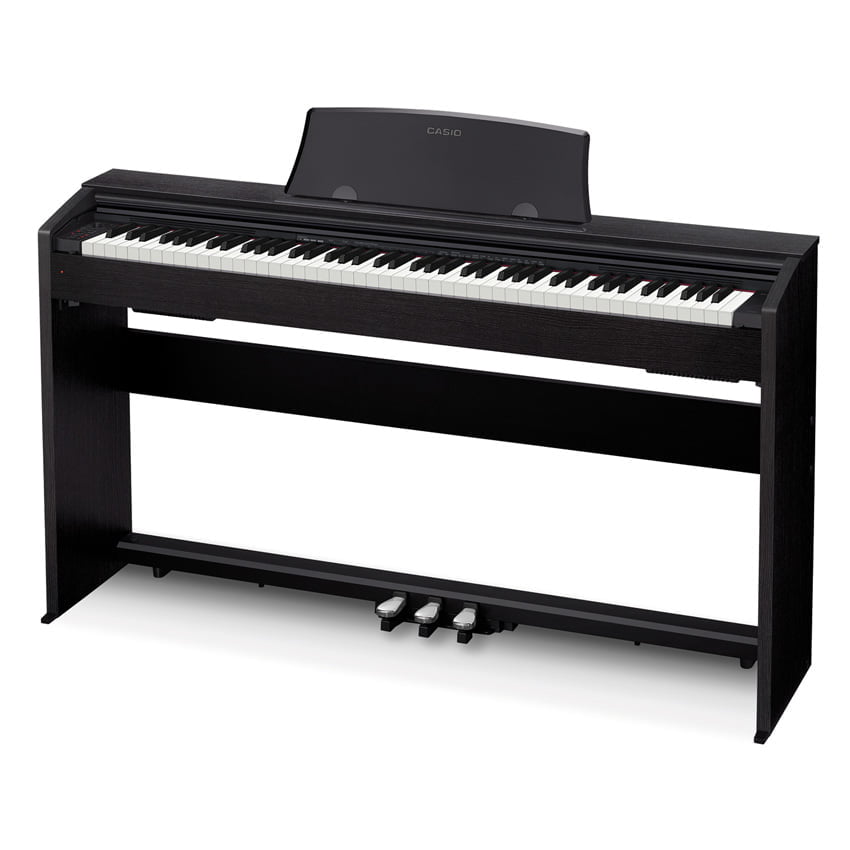 Beginners will genuinely have a blast playing, and more importantly, learning on these two digital pianos.

As aforementioned, the two are pretty much the same when it comes to the audio and overall sensation. Since these two are the most critical features, expect to read an in-depth analysis below.

Barring the main details noted above, The P45 and CDP S100 have considerable differences, which some may consider minor but are quite consequential, particularly for students. The disparity is where Yamaha bests Casio 2:1.

There is just one aspect that I look for when it comes to the ‘feel’: likeness to an acoustic piano.

This opinion may feel quite simplistic to more sophisticated musicians, but this indulgence is rarely expected from low-cost digital pianos.

Overall, both the P45 and the CDP S100 have mechanisms that mimic an acoustic piece. This tiny fact won’t please finicky professionals. Still, newbies won’t have to make huge adjustments when they shift from practicing on the digital piece to doing a recital performance on a pianoforte.

Yamaha makes use of the Progressive Hammer Action while Casio utilizes the Scaled Hammer Action (II). The two mechanisms are similar in the sense that the left-most (lower) keys are heavier compared to the right-most (higher) keys, which are lighter.

Speaking from a more technical standpoint, Scaled Hammer Action has a third sensor that adds resistance when you’re pressing on it. Many (professional players, I have to add) did complain that this makes the sensation artificial compared to the naturalness of the Graded Hammer Action on Yamahas.

On top of that, the CDP S100 lacks one crucial thing – escapement. It seems like Casio has not focused on this detail too much. Based on this observation, the P45 wins here.

The good thing is both have adjustable touch sensitivity – four choices for the P45 and three for the CDP S100. And don’t worry because whichever you choose, the sound will come out the same.

The two digital pianos have textured plastic keys so your fingers won’t accidentally slip from one key to another.

Casio CDP S100’s keys are said to resemble natural ivory and ebony, but to be honest, these are simply matte. I was a bit disappointed with Yamaha P45’s keys, though. While the black ones have a bit of grit on the surface, the whites are simply plastic smooth. Because of this flaw, the point goes to the CDP S100.

To uninitiated ears, the P45 of Yamaha and the CDP S100 of Casio sound precisely the same. And by that, I mean an actual upright piano. I can’t say this enough, but for relatively inexpensive musical instruments, the fact that both sounds natural is quite impressive.

As I have mentioned several times already, the feel and the tone of these two digital pieces are at par with each other. However, the entry-level Yamaha edges out the entry-level Casio by just a tiny bit in this particular aspect, as fully detailed below.

AWM (Advanced Wave Memory) Stereo Sampling is the sound engine technology used by Yamaha. This method involves capturing sound – recording the notes of various acoustic instruments and enhancing these to be ‘played back’ on the piano.

The latter may seem too basic, but the straightforwardness of the technology makes it work. And while the former is still a great system, many experts consider AWM a slightly better option.

As expected of the price, the two digital pianos have limited built-in voices – ten each, to be exact. And while some of the voices do not entirely satisfy, the different piano voices are of outstanding quality.

Casio’s CDP S100 has three grand and three electric pianos. It’s better to stick to these six because the four others (strings, harpsichord, pipe, and jazz organ) are less than satisfactory. And numerous people have commented that the harpsichord sounds far from the actual thing.

Yamaha’s P45 has two grand pianos, two electric pianos, and two organs. A couple of harpsichords, an orchestral string, and a vibraphone complete the ten. Like its competitor, it would be better to stick to the basic piano tones.

The other features and functions make Yamaha’s P45 edge out Casio’s CDP S100 by a significant deal since it hosts numerous playing modes, making it a better learning instrument. On the other hand, the latter proves to be quite essential in this regard. The plus points it gets for improved connectivity don’t exactly take it a step ahead; more’s the pity.

In the simplest terms, polyphony is defined as the number of notes that can be played and heard simultaneously without losing a particular sound.

Both the featured digital pianos have 64 each; that’s why they tied in this aspect. The low polyphony count isn’t that bad for beginners since most of the elementary pieces they will play won’t need a whole lot. But other brands’ entry-level candidates have 128 already, which is near twice that.

Then again, for the price tag that comes with these pieces, let’s be glad we’re not getting just 32. There are a whole lot of scores that can be successfully played with 64, even with a bit of layering,

As noted above, P45 and CDP S100 have layering (dual) capabilities. Layering basically means that you can choose two (or more) instruments and hear those when you press a single key.

That’s where the similarities between the two end. The Yamaha contender has more playing modes.

First, this has the split mode, which, as the term implies, bisects the keyboard right in the middle. The left side plays one voice while the right plays another.

Second and more importantly, the P45 has the duet or twin mode, which allows you to divide the keyboard into two 44-key pieces with the same octave. The twin capability is excellent for learning, especially when students sit beside their tutor.

Reverb is one of the most preferred effects on digital pianos because it gives your playing that ambient feel, a fuller and grander sound when you need it. Most entry-level pieces have this, and the P45, I was glad to know, has four types.

The CDP S100 earns more points in this aspect because it has two main effects: reverb and chorus. Granted, not a lot of musicians look for or use the chorus. However, there are some songs that kind of require this effect. It is just an add-on that is quite lovely to have.

Both Yamaha P45 and Casio CDP S100 have the same essentials at the back panel: DC power input, headphone hookup, the damper pedal input, and the USB midi in/out.

However, Casio is more clever in adding two essential properties. First, they have an AUX that allows users to connect their devices and play backing tracks while tinkling the keys.

Their digital piano can also be battery-powered. Six AA batteries can last up to six hours on full-blast volume, although the company notes that it could go on up to 13 hours. I haven’t tried that personally, but maybe that’s possible when using headphones.

Unfortunately, these are not as important as the modes which the CDP S100 lacks. And that is why the P45 still wins in this chapter.

The CDP S100 is outfitted with two 8-Watt speakers, which is way better than the P45’s two 6-Watt ones. The former’s speakers are also placed at the back panel, which reverberates against the wall, the usual spot most people would position it. On top of this, the Casio has slits right on top of the keys – additional speakers that add to the amplification.

The latter’s speakers are also at the bottom hence the usual complaint about its slightly muted volume. .

Casio packed many functions in such a tiny piece – a remarkable feat, to be honest. The CDP S100 is one of the most compact digital pianos, measuring just 9 inches wide (or deep) and almost 4 inches thick. The Casio model is also lighter, so it’s easier to carry around.

Yamaha’s contender is not bulky by any means, but it is larger and heavier.

It’s not a huge deal for some, but the fact that the music stand of the CDP S100 is straightforward to attach and remove is an enormous plus for me.

Overall, the P45 of Yamaha clinched the top spot in this one-on-one because of its much-needed playing modes. And to be honest, these are must-haves for beginners who are just starting to learn how to play the piano.

However, the P45 is quite similar to the CDP S100 where it matters: the feel and sound.

The mechanisms of the two may be different, true. The former is essentially run by the Progressive Hammer Action and the AWM Stereo Sampling, while the latter is set in motion by the Scaled Hammer Action and the Dual Element AHL II. But the output is pretty much the same and, more importantly, very close to a real acoustic piano.

I also can’t say this enough: it’s truly impressive that both have 88-keys with 64-count polyphony and good enough grand and electric piano voices at incredibly low prices. That’s pretty hard to beat.

And at the end of the day, shopping for a digital piano will be based on what you personally like. Because the P45 and CDP S100 are pretty similar in the two most essential aspects, either will work well for any (not too overly critical) musician, to be honest.