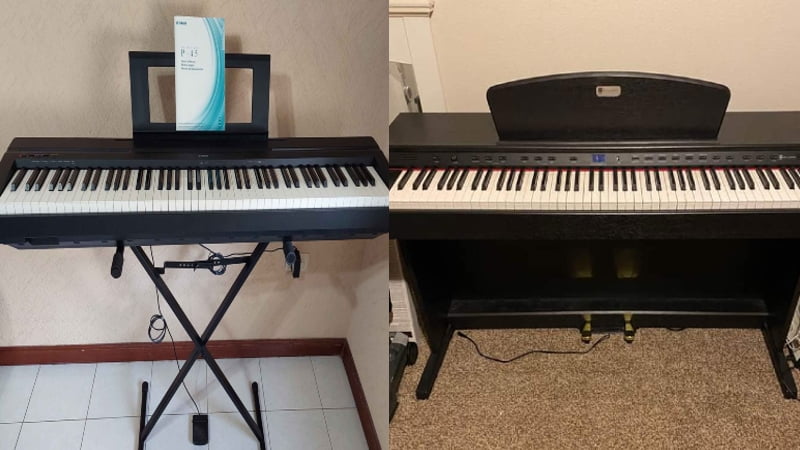 Find the best piano for your needs in this Yamaha P45 vs Williams Rhapsody II review!

If you’re looking for a new digital piano, there’s a high chance you’re choosing between a portable or console model. Both have their advantages, and it’s really up to your needs as a pianist when finding the right one.

And to give you a better idea of which piano better fits your needs, I’ll compare two popular models for many beginners: The Yamaha P45 and the Williams Rhapsody II. These are two very different instruments, and each has its set of perks.

But between the two, I found that the Yamaha P45 was the better option. It had richer tones and a more realistic feel. And since it’s portable, it’s also a very flexible option for pianists.

That said, the Williams Rhapsody still has some benefits that may suit your needs better. So, let’s dive into the details so you can determine the best option for you!

To find the better piano between the two, I decided to compare all the features against each other. And by the end of this comparison, the Yamaha P45 came out on top with a score of 3-2. It was a close battle, but there was no denying that the Yamaha P45 offered more benefits than the Williams Rhapsody II, which is why it ultimately came out on top.

The first feature I compared between the two was the tone. You always want to make sure you buy a digital piano that can replicate an acoustic piano’s sound while offering other voices. And after rigorous testing and research, I couldn’t choose a winner between the two.

There was no doubt that the Yamaha P45 had richer tones because of the tone generator. However, the Williams Rhapsody II came with more voices, which is why they both came out with a point in this comparison.

Most of the time, console digital pianos have fewer voices than portable ones. But with these pianos, it’s the opposite. I was quite surprised, but the Yamaha P45 actually has lesser voices than the Rhapsody II.

That said, both the P45 and the Rhapsody II come with a similar sound library. While you have more options with the Rhapsody II, they both come with piano, electric piano, strings, synth, and organ voices.

So, if you’re looking for more voicing options in a digital piano, the Rhapsody II might actually be what you need.

The Williams model comes with more voices. But if tone quality is your main concern, the Yamaha P45 is the better pick. This is because the Yamaha P45 uses the Advanced Wave Memory or AWM tone generator, which is Yamaha’s affordable but highly realistic tone engine.

When you play the Yamaha P45, you’ll instantly notice richer and brighter piano tones. And when I tested out both models from the same speaker system, the Yamaha P45 clearly had higher-quality sounds, and it was no argument.

However, the Williams Rhapsody II still had decent voices. In fact, the tone quality from the Williams was surprisingly good, considering its price point. But when compared to the Yamaha P45, it was clear that the Williams didn’t have tones that were as rich and realistic.

Another aspect I had to consider when comparing the two options was playability. This is where the Yamaha P45 truly shined, as the incredible hammer action on this piano was far ahead of the Williams Rhapsody II.

The Yamaha P45 uses the Graded Hammer Standard or GHS. This is a staple feature of many Yamaha pianos, from their affordable to their mid-range options. This hammer action system is designed to easily replicate the feel and weight you get when playing a real acoustic piano.

So, aside from weighted keys, you have subtle differences in the hammer action. This is why you might notice that the lower keys are heavier than the higher ones when playing the Yamaha P45, the same as an acoustic piano.

On the flip side, the Williams Rhapsody has basic weighted keys. Granted, this still provides a fairly realistic feel. However, I must admit it was missing the subtle weight differences I noticed on the Yamaha P45.

The last comparison point I had with these two pianos was the actual piano features. And I declared this category a tie because the Yamaha P45 comes with more useful playing modes, but the Williams Rhapsody II comes with better effects.

The Yamaha P45 comes with two playing modes: dual and duo modes. Dual mode is also called layering mode, allowing you to layer or combine two voices. For example, you can mix strings and piano voices. That way, your tone has more body and depth whenever you press a key, which is a great feature when performing live or accompanying another musician.

Duo mode, on the other hand, is designed for duets and piano lessons. This mode splits the piano in the middle. So, it’s like you have two mini keyboards with the exact same tuning and timbre.

That way, you and another pianist can play together as if you had two pianos. This is a really cool feature for piano duets that can also make piano lessons with your teacher much easier.

And while the Williams Rhapsody II comes with many dual modes, it doesn’t come with duo modes. Instead, it comes with split mode. This allows you to assign different voices to either side of the piano.

This is a very useful feature. However, if you’re a beginner, this isn’t something you’ll use a lot, which is why the Yamaha P45 was the winner when I compared the playing modes.

These are two different pianos designed for various needs. And the differences between the two were why I decided to make this comparison. However, when learning as much as I could about the pianos, I found that they also share a couple of similarities.

Additionally, both pianos have fairly decent speaker systems. I found that the tones from either instrument sounded great on the built-in speakers. And while neither of the speakers would be loud enough for live performances, it’s great for practice and piano lessons.

At the end of the day, I found the Yamaha P45 to be the more flexible option, which is why it ultimately won the comparison. But if you need a high-quality console digital piano on a budget, the Williams Rhapsody II is still a great pick.