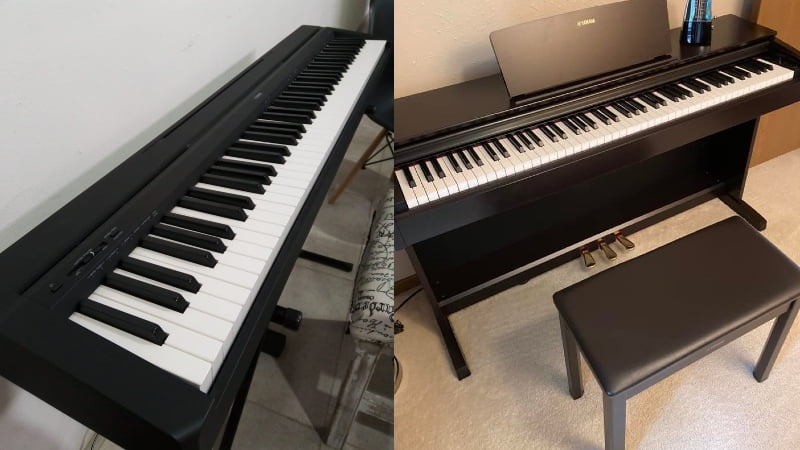 Making this Yamaha P45 vs YDP 103 comparison was a whole lot of fun. Not only are these two great digital pianos, but they are in the exact same tier of their product line. The P45 is the entry level model of Yamaha’s portable collection while the YDP-103 is the entry-level option of their console piano series.

And while they do share a fair amount of similarities, the differences showed that the Yamaha P45 is the better option, especially for beginners. For starters, it’s portable, so beginners have more freedom to bring the piano with them to lessons or jams with friends. On top of that, it’s more affordable and comes with more features than the YDP-103.

With that said, there is something different to console digital pianos. They offer a more realistic feel and look like acoustic pianos, which makes them a great option for homes and venues.

The YDP-103 is one of the most affordable console models on the market today, but in this review, you’ll learn why you might be better off getting the Yamaha P45 instead.

Comparing two pianos can be difficult, but when you compare each feature head to head, it becomes much easier. And when doing this for the Yamaha P45 and YDP-103, the final score was 3-2, in favor of the P45.

Since both these pianos share a similar tone and sound library, the deciding factors were the piano features and portability, which was much better on the Yamaha P45, despite the YDP-103 providing a much more realistic playing feel to the piano.

Since the sound of the piano is one of the most important features to consider, this was the first thing I compared with these two options. These two pianos are made by the same brand and share the same tone generator and even the same sound library. So, in the end, these two were definitely tied in terms of tone.

When you buy a digital piano as opposed to a regular keyboard, you pay for quality and not quantity. So, you won’t get as wide a sound library, but you definitely get top-quality voices. With the Yamaha P-45 and the YDP-103, you get 10 different voices to play around with.

Among these 10 voices are some acoustic piano, electric piano, synth, bass, strings, and organ sounds. This isn’t as varied as some of the more expensive models available, but they do offer enough versatility for beginners.

With either of these models, you can play a wide variety of music from classical piano to funk organ. This is why both of these pianos are considered top models for beginners.

Just like the sound library, these two pianos share a tone generator. If you strip it down to the bare bones, the Yamaha P45 and the YDP-103 simply use sampling to generate tones. With this method, whenever you press a key on the piano, you trigger a sample or recording of the real instrument, which is what comes out of the speakers.

However, what sets these Yamaha models apart from others in the same price range is that it uses AWM Stereo Sampling. This is a technology developed by Yamaha that allows their digital pianos to have higher quality tones than others on the market.

The reason this works is because Yamaha gave these pianos more memory. Most digital pianos in this price range provide the piano with a very small memory, which means they can only load compressed and digital-sounding samples into the keyboard.

However, since the Yamaha P45 and YDP-103 have bigger storage capabilities, Yamaha was able to load stereo samples and recordings of their instruments with natural decay. The result is a much brighter and realistic tone that better resembles a real acoustic instrument.

With that said, since these are some of the more affordable Yamaha  models out there, the recordings still won’t be as high-quality as the pianos designed for professional performers. However, they are still good enough for just about any beginner or novice student out there.

Aside from the tone, the feel is probably the second most important feature of any piano. And since the YDP-103 is designed to simulate the weight and size of an acoustic piano, you can expect it to have better feel and playability. While both pianos have the same hammer action system, the Yamaha YDP-103 had coated keys, which made all the difference in terms of the feel.

In terms of hammer action, the Yamaha YDP-103 and P45 are about tied. This is because they share the same system, known as the Yamaha Graded Hammer Standard or GHS. This is a system specifically designed to replicate the feel of an acoustic piano.

When trying out both of these pianos, I could barely tell the difference in terms of weight. In fact, in their price range, they arguably offer some of the most realistic weight compared to other models.

Granted, there is still a noticeable difference between the YDP-103 and P45’s hammer action and an acoustic piano, but if you’re a beginner, the difference isn’t a big deal at all..

Since they share the same hammer action system, the deciding factor between the set two models in terms of feel is the key texture. When I tested out the P45, I kind of expected a lackluster key texture, and while I wasn’t surprised, I was still disappointed.

One of the reasons the P45 is so affordable is because it has plastic keys. And while this won’t make that much of a difference for most beginners, when you start to play faster and more complicated pieces, having textured keys helps out a lot. So, it would have been much better for the P45 if it had some sort of coating on it so that the texture better resemble an acoustic piano’s keys.

The YDP-103 has that exact coating I was just talking about. The YDP-103 doesn’t have wooden keys and still uses plastic. However, the difference is that the YDP-103 has a very subtle coating designed to replicate the texture of real wooden keys on an acoustic piano.

The result is a subtle difference that you won’t notice as a beginner. However, for experienced pianists and performers, the key texture could make it much easier to play specific pieces, especially if you’ve grown accustomed to the key texture on acoustic pianos.

When you’re a beginner, it’s nice to have a piano with a lot of different features and functions so you have more flexibility. With the Yamaha P45, you simply have more versatility than the YDP-103 because of all the additional playing modes on the piano, which is why the Yamaha P45 comfortably takes this point.

Both of these modes add a completely different layer to the piano. With duo mode, the piano is divided into two separate zones with the same pitch and timbre. This essentially turns the piano into two mini keyboards, making it ideal for piano lessons.

With duo mode, you can have the teacher playing one side and the student playing the other. The result will be like having two different pianos so that the teacher can demonstrate and play along with the student without having to cross over to each other’s side.

With dual mode, you can blend two different voices together. This results in a unique tone of two blended voices that’s ideal for accompaniment when playing with other musicians. On top of that, you can adjust the mix level of each layer, which gives you more control over the final tone.

The Yamaha YDP-103 is designed to be a more-traditional piano, so it only comes with duo mode for piano lessons. While this is still a useful feature, you undeniably get more versatility with the Yamaha P45.

Both of these pianos come with the same set of effects, which is neat. The YDP-103 and P45 both come with four different types of reverb. As a pianist, reverb is probably one of the most important and significant effects that you’ll need. With this effect, you can add a whole lot of depth and character to your tone.

You can make your piano sound like you’re inside a concert hall or other playing venue by replicating the way sound bounces around the walls and space. While this isn’t exactly a necessary feature for beginners, it’s still pretty nice to have.

Both of these pianos have the same 64-note maximum polyphony. This is about what is expected from budget-friendly models, but it would have been nice if the pianos had at least 128-note polyphony for maximum versatility.

With that said, the Yamaha P45 is the cheaper option between the two. So, the lower maximum polyphony is more acceptable on the cheaper model, which is why it took the point in terms of piano features.

There’s no question that the Yamaha P45 is the clear winner in this regard. After all, the Yamaha YDP-103 is not designed to be moved around at all. Since the YDP-103 is a console piano, it’s designed to be set up once and kept in the same place for a long time. It’s heavy, comes with a furniture stand that isn’t removable, and if you try to move it around, you’re likely going to have a hard time.

On the flip side, the Yamaha P45 is a portable piano. While it’s still fairly heavy since it’s a full 88-key instrument, it can easily fit in a bag, car, or be carried by one person. As a beginner, there’s a high chance you’ll be going around with your instrument a lot, which is why the Yamaha P45 is a great option for piano students beginning their journey.

At first glance, it’s easy to assume that these pianos don’t share any similarities. They have very different designs and look very different from each other. However, these models come from the same brand and are in the same tier when it comes to their product line, so they do share a fair amount of similarities.

As the most affordable options in their product lines, both the P45 and the YDP-103 are designed for beginners. If you’re starting out your piano journey, these are great options for you as they provide you with just about all the functions you need at an affordable price.

On top of that, they are fully-weighted keyboards with a great tone generation system. So, if you invest in either of these pianos, you’ll be getting much higher sound quality than you’d expect in the price range.

Both of these models have the same tone generator, hammer action system, and even share similar sound libraries. So, at the end, the deciding factor between the two is the fact that you can bring the Yamaha P45 around with you to lessons and performances while the YDP-103 is designed to stay in one place for a very long time.

Quick Rundown of the Yamaha YDP 103