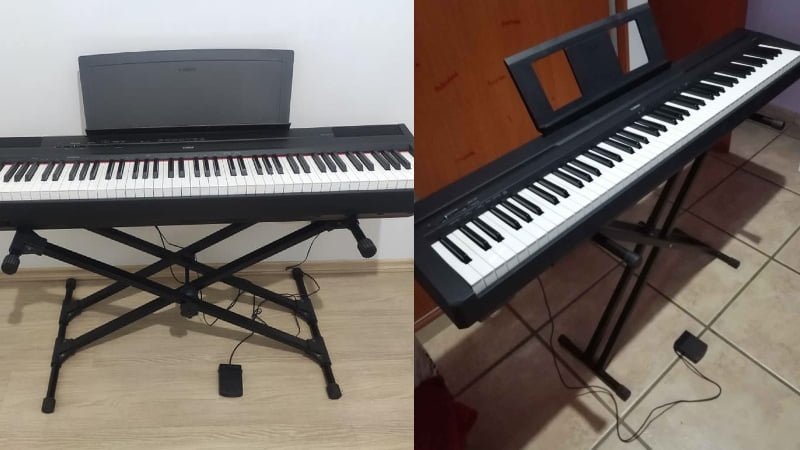 Yamaha, one of the most recognizable names in the music industry, has been in the business since the late 1800s. With over a hundred years of experience under its belt, they have become such a trusted brand that anything they come up with becomes a sure hit.

The P45 and the P115 are the entry-level models in their P or Portable Series. From the numerical designation, one would rightly surmise that the latter has more features and, therefore, is more expensive.

However, it is quite tricky to conclude that the P115 is the better choice in this Yamaha P45 vs P115 match-up. First of all, the company has recently discontinued this model and replaced it with another P-tagged model. Secondly, the almost $400 difference in the price tag between the two is quite sizable. This development makes the P45 an enticing option considering its remarkable features for an entry-level piece.

It is effortless to assume that Yamaha’s P115 is better than the P45. To be perfectly honest, the former beat out the latter 4:1 when all aspects are considered. But the almost $1,000 price tag on that particular model can make any beginner or musician-on-a-budget hesitate.

One good way to put things into perspective is to ask this particular question: how do you plan to use your digital piano?

Newbies thinking of starting their piano journey are well off with the P45. It’s a sturdy, surprisingly high-quality piano that won’t break the bank. However, if you’re at the intermediary skill level or want a good but affordable piano for professional performances, the P115 is the smarter buy.

The feel – literally the sensation of the keys under your fingers – is the particular facet where these two are equally matched.

Very much like a real acoustic piano, both the P45 and the P115 are geared up with slightly textured, weighted keys – helpful because users won’t have to make huge adjustments when moving from digital to acoustic and vice versa.

All Yamaha P-series digital pianos use the Graded Hammer Standard (GHS) system. This system renders all 88 keys appropriately weighted – heaviest on the left-most bass and lightest on the right-most treble – exactly like an upright acoustic or even a concert grand.

Touch sensitivity is not precisely dependent on the hammer action in terms of mechanism, but the two are certainly related, so I thought about mentioning it here.

The two P-series models in question come with four levels: Hard, Medium (the default setting), Soft, and Fixed. If you choose ‘Hard’, you will need to strike the keys a tad more forcefully for the sound to emerge more audibly. If you choose ‘Soft’, which I have to say is not a good option when practicing, the sound will be produced even when you gently run your fingers over the keys.

Since the P45 is the P-Series’ most basic digital piano, I was honestly expecting to get smooth plastic keys. It was surprising to feel slight matte-ness on the black keys, though.

Conversely, considering the price point, I was hoping for better-looking keys on the P115. Unfortunately, it had the same plastic-y smoothness on the ivories and the same level of grit on the ebonies.

As aforementioned, the P115 wins over the P45 by a mile when it comes to numerous factors. The tone, the actual sound produced by the digital piano, is possibly the most important of all features. And I don’t exaggerate when I say that the P115 ran away with it in this chapter.

Yamaha makes use of their proprietary AWM (Advanced Wave Memory) Stereo Sampling for the P45. This technology involves capturing the sound of an acoustic grand with two microphones. But to realistically recreate the change in tone and volume when one hits the keys, they take at least three samples of each note – mezzo strike, mezzo-forte strike, and forte strike – and combine those into the tone generator.

They have bested themselves with the P115, though, using the newer and more improved Pure CF Sound Engine. The method in capturing the sound is pretty similar to the AWM Stereo Sampling. But here, they captured the samples from their top-rated CFIIIS concert grand, so the sound that emerges is more dynamic and sparkling. It makes the P45 sound slightly muddier when the two are played side by side.

This is another feature that lends another point to the P115. Not only does it have more voices, but it also has better quality.

First, the P45 has ten voices, including two grands, two electrics, two organs, two harpsichords, an orchestral string, and a vibraphone. I liked the piano sounds – perfect for beginners, really. The rest I would rate as decent.

The P115 has fourteen: three grands, three electrics, three organs, a vibraphone, a set of strings, a harpsichord, and two basses. I can’t praise the piano sounds enough, especially the concert grand, considering its tone generation. But there is very little to complain about the rest of the voices too.

The P45 only has one effect: Reverb. The Reverb’s main function is to try and extend the sound of a note and add brilliance to it, depending on the space one chooses, before it ‘decays’ or dies down. There are four to choose from: Recital Hall, Concert Hall, Chamber, and Club.

Many musicians, even accomplished masters, are happy with just the reverb effect. But the P115 has been beefed up with two more that add to its realism.

The first is Damper Resonance. Quite specifically, this is the vibration of the strings when the sustain pedal is used. The other one is Sound Boost, a feature that increases the sound’s resonance, essentially upping the volume a bit higher than the maximum set.

The superiority of the P115 over the P45 is quite undeniable in this section. All these ‘special’ components found in the former are why it is probably marked up to almost a thousand bucks – quite understandable when you see the specific details below.

Polyphony is defined as the number of notes that can be played at the same time without loss. This feature may not be a compelling need for beginners, but users with intermediate skills and professional musicians will undoubtedly require this for the pieces they play.

The P45 has 64, which is considered scarce in comparison to other brands. The P115 has more than twice that number at 192. The drawn-out sounds are clearer when the sustain pedal is in use.

The P115 is a total heavyweight in this aspect, with 14 demos and 50 piano songs. In comparison, the P45 feels scrawny with just ten preset songs.

Both the P45 and P115 have Layering and Twin capabilities. The former is a mode that combines two or more voices, say a grand piano and strings, when a single key is struck. The latter is a mode that divides all 88 keys into two 44-key pianos with the same octave. This function is beneficial when a tutor and his student are playing together.

Only the P115 is equipped with the Duo mode, a function that bisects the piano in the middle, allowing the user to set a particular voice on the left side and another on the right.

Both the P-models in question come with the following: a 12-volt DC-In, standard headphone jacks, sustain pedal, and USB to host. The upgrades on the P115 include connectivity to a three-pedal unit and an Aux Out.

What makes the P115 more appealing is its internal recording capability, made extra manageable with the ‘Record’ button on the front panel. This function is especially beneficial to students who want to check their progress or composers who wish to capture tunes they come up with immediately.

If you want to get the most out of your P45, recording included, you will need to connect to the Yamaha Smart Pianist app on your device via USB. You can also connect the P115 to the Yamaha app, albeit the older version called the Digital Controller App.

The two Yamaha models would have been tied in this regard since the two have almost the exact dimensions and come with the same accessories. But Yamaha rigged additional speakers into the P115 for that brilliant, more intense sound.

The P45 and the P115 are nearly identical, with the same width and depth. The latter is a few millimeters thicker (or higher) and a few ounces heavier.

The P45 is outfitted with two 6-Watt speakers (12cm cones). While this is great when practicing alone in your room, I agree with the common complaint that it can get drowned out when you have accompaniment.

Thanks to the two 7-Watt speakers (12cm cones) and the two additional 4-centimeter cones on the P115, the bass is boosted and the treble slightly crisper. The beefed-up system probably helps with the aforementioned digital effect that is Sound Boost, a great help when you’re playing with a band.

Both models come with the AC adaptor, a plastic pedal, and a music rest. The only difference is that you can use a three-pedal unit with the P115. Unfortunately, the stand is not included in the set. However, you have two main options to choose from: the foldable and portable metal type or the wooden stand which can make your piece look like an acoustic upright.

First of all, the two Yamaha digital pianos are physically alike and come with the same essential accouterments. Most of the features and functions found in the P45 are also added to the P115.

But the most important similarity between the two is that they also share similar semi-textured keys (plastic smooth white ones and matte black ones) and, more importantly, hammer action with the GHS system. The second is quite interesting to me because the technology is still impressive; ergo, the P45 is not outdated.

At the end of the day, both the P45 and the P115 are hands down pretty good stage pianos.

As I have repeatedly mentioned, the P45 is excellent for beginners working on a budget. Just think of it as a stripped-down concert grand – not as flashy as the P115 or the other higher P-models, but it is a great place to start your piano journey. However, if you’re willing to shell out a few hundred dollars more, go for the P115. This model is likely to last longer, particularly if you progress faster.

Do note that Yamaha has recently discontinued the P115 and replaced it with the newer, more improved, and slightly pricier P125.

Quick Rundown of the Yamaha P115