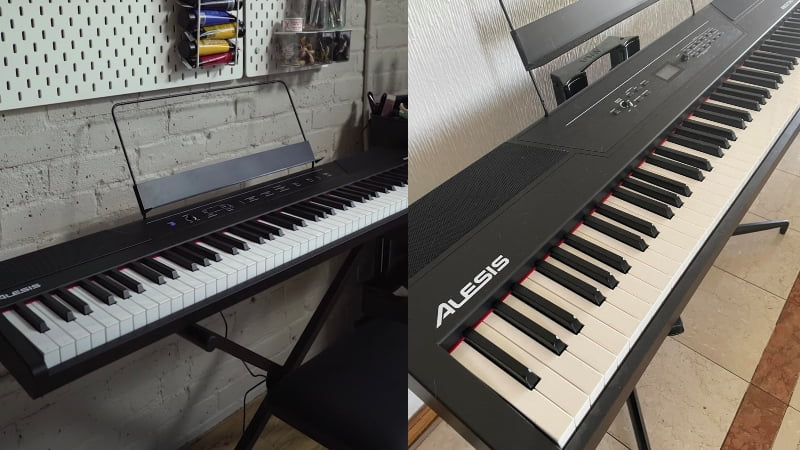 The Alesis Recital and the Alesis Concert both meet all the criteria needed from a good digital piano for beginners. For starters, they are both very affordable and offer a wide range of great features for the price. And while the Alesis Concert is the more expensive option, I found it to be the better choice between the two as well.

These two pianos share a whole lot of similarities, which is why the Alesis Recital vs Concert debate is a hot topic in music circles nowadays. They have similar hammer action, effects, and even playing modes, which can make it tough to figure out the better option.

With that said, if you’re looking to save money and willing to sacrifice a bit of versatility, the Alesis Recital is still a great option for beginners.

Alesis Recital vs Concert: The Differences

To accurately determine a winner between these two very similar pianos, I decided to compare each feature head to head. And by the end of it all, the score was 3-2 in favor of the Alesis Concert. As the score suggests, it was a tightly fought battle all throughout since the Alesis Recital offers very similar features at a more competitive price. But in the end, since the Alesis Concert offers more versatility for beginner pianists, it is the better option between the two.

When I first took a look at the price of these pianos, I honestly didn’t expect much when it came to feel and playability. And sadly, I was right not to expect top-quality hammer action and key texture. Since these are both budget-friendly options, they both feature glossy and semi-weighted keys. While you need to pay a higher price to get fully-weighted keys, it would have been really nice if at least one of these pianos featured fully-weighted keys to better simulate the feel of an acoustic piano.

If you’re looking for a digital piano that perfectly replicates the action of an acoustic piano, these aren’t the models for you. To cut down on costs, Alesis only featured semi-weighted keys on both these pianos. So, while you have some weight when you press down on the keys, it won’t be as heavy as what you’ll get on an acoustic piano, which is a very important factor to consider.

Now, just because these pianos have semi-weighted keys doesn’t mean they are bad options. In fact, there are a lot of beginner pianists out there who might benefit from semi-weighted keys. If you’re buying a piano for a child to start learning, the fully-weighted keys might actually be too heavy for them. And if they have a hard time pressing down on the keys when they’re first learning, they might be discouraged to carry on with their lessons.

Again, keep in mind that these are entry-level digital pianos, so you won’t get wooden keys. Sadly, you don’t even get a textured coating on the plastic keys to simulate how it feels to touch ebony and ivory piano keys. This is a feature usually reserved for the more expensive models out there, so it’s easy to forgive both the Alesis Recital and the Alesis Concert.

However, if any one of these pianos came with textured keys with a nice coating, it would have automatically made them some of the best pianos in their price range. With that said, both the Recital and Concert still come with a fair amount of features that make them compete, if not beat out, a lot of the other models in their range.

I was not expecting premium piano tones from these models. In fact, I was expecting very digital sounding voices that would only work well for beginners. However, both of the pianos are loaded with fairly high-quality samples, so while there is still a slight digital texture to the sounds, they are significantly better than other models for beginners.

And while they had the same tone generator, the reason the Alesis Concert won the point in terms of tone is because it comes with 10 different voices, which significantly beats out the Recital’s 5 different voices.

Both of these pianos generate their voices in the same way: through sampling. If you buy digital pianos in this price range or any piano below $1,000, there’s a high chance they generate tones through sampling. This is because sampling is a simple, cost-effective, and easy way to load a piano with high-quality voices that can compete with more expensive models.

The key to get high-quality voices is loading the pianos with top-tier samples. The Alesis Concert and the Alesis Recital are definitely loaded with competent samples. However, when conducting an ear test, I did notice that both of these pianos had a slightly digital sound, which isn’t a surprise since they are entry-level digital pianos designed for beginners.

When getting a digital piano, you can rest assured that you won’t get as versatile a sound library as compared to getting a keyboard. This is because digital pianos put the emphasis on quality over quantity, so while you get lesser voices, you do get higher-quality sounds that aren’t MIDI generated.

The Alesis Recital only has a sound library with 5 different voices. Now, this isn’t a lot, but it’s more than enough for most beginners to start learning the ins and outs of playing the piano. You get a couple of acoustic piano, electric piano, bass, and strings voices with this piano. When you’re a beginner, this is more than what you’ll need, which is why the Alesis Recital is a great basic digital piano that would work very well for first-timers.

The Alesis Concert, on the other hand, offers a bit more versatility than the Recital. It comes with 10 different voices, so you get multiple different options per category that you choose. This is a great extra feature, though I have to admit, it isn’t exactly necessary for a beginner’s piano. If you’re a novice player or someone playing with other musicians, having a wide sound library is great. But when you’re just starting to learn how to play, all these different sounds can actually be distracting.

But since the Alesis Concert still offers more versatility at the end of the day, it was the clear winner when compared to the sound library on the Alesis Recital.

While the Alesis Concert is the more expensive model, it doesn’t have a wider range of piano features than the Alesis Recital. In fact, the Recital actually boasts more playing modes and the same effects and connectivity features. However, the Alesis Concert does come with a sustain pedal, which is a big deal for beginner pianists, which is a major reason the pianos are tied when it comes down to the piano features.

The Alesis Concert only comes with split mode and layering mode. On the other hand, the Alesis Recital comes with both of those modes plus an additional “lesson” mode which is specifically designed to help beginners during piano lessons.

Split and layering mode are basic features that are great to have on any piano. With split mode, you can assign different voices to either side of the piano, which allows you to “play” two instruments at the same time. If you’re trying to learn hand independence or playing a solo gig, this mode becomes especially useful.

With layering mode, you can load two different voices at the same time. This allows you to create a very unique tone by combining different voices such as strings and piano. The advantage that the Alesis Concert has in this regard is that it actually has more voices, so you have more options when it comes to blending.

However, if you’re a beginner, the most important playing mode to have is lesson mode. This is sometimes called twin piano mode and it splits the piano into two mini keyboards with the same voice and pitch. That way, the student and teacher can play simultaneously without crossing over. Additionally, this mode makes it easier for teachers to demonstrate specific playing techniques to beginners.

Both of these pianos come with reverb and chorus, which are probably the most important effects for any pianist, whether you’re a beginner or a professional performer. Both of these effects allow you to customize your tone and add new layers and textures. If you play with a band or just want to come up with cool and unique sounds, these different effects will surely come in handy.

The reason these two pianos are definitely tied when it comes to piano features is the accessories that they come with. While the Alesis Recital comes with more playing modes and the same effects as the Alesis Concert, there is one specific accessory missing from the Alesis Recital: a sustain pedal.

When you start learning the piano, the sustain pedal is a major technique you need to master. There are specific pieces that require the sustain pedal for certain parts, and it’s crucial for expressing yourself properly through your music. The Alesis Concert does come with a sustain pedal, which makes it a more complete set overall compared to the Alesis Recital.

Alesis Recital vs Concert: The Similarities

These two pianos come with a fair amount of different similarities. Since they are considered the entry level options of Alesis, there aren’t that many differences between the two. For example, these two pianos share the same lackluster semi-weighted action system. While this was a great way to keep the cost of the piano down and could even benefit young beginners, having fully-weighted keys would have greatly increased the value of these two models.

Additionally, both pianos have the same connectivity features. They both have MIDI connectivity. However, neither of the pianos have dedicated MIDI ports. Instead, you need a USB cable to hook these pianos up to your computer. And while it would have been nice to have MIDI ports, more and more people nowadays use USB connections anyways, so it won’t be hard to connect them to your pianos.

Quick Rundown of the Alesis Concert