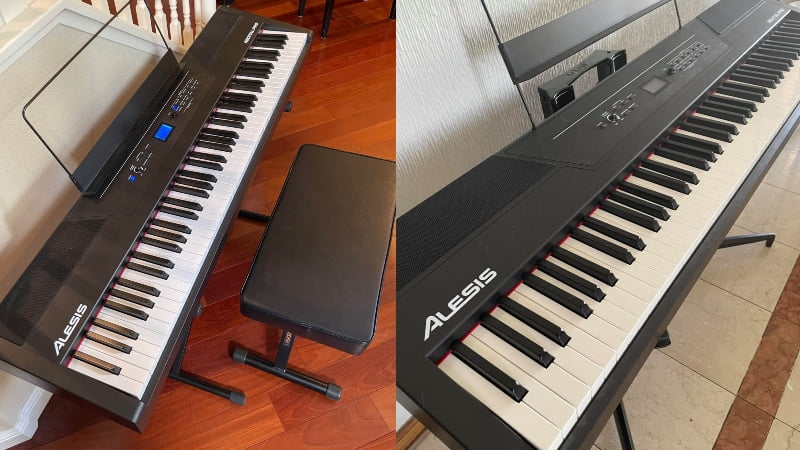 When Alesis released the Recital Pro, I have to admit that I was kind of skeptical. The original Alesis Recital had already served me so well up until that point, so I didn’t see any reason to upgrade, especially with a price difference of over $100!

And when researching the Recital Pro, I found that it solved all of the complaints I had about the Recital. With the Recital Pro, you have a much richer sound library and a wide variety of playing modes. So, while it may cost more, it’s hands-down the better digital piano, especially for beginners.

One of the main questions people have regarding these two pianos is, “what’s the difference between the two?”. Since the names are very similar, it’s easy to see why. So, to figure out which model stands out between the two, I decided to compare their differences.

And in the end, the final score was 3-1 in favor of the Alesis Recital Pro. With a wider and more varied sound library and a robust set of piano features, the Alesis Recital didn’t put up that much of a fight over the upgraded model.

This is arguably the only area where I found these two models to be tied. Sadly, the one concern that wasn’t addressed by the Recital Pro is the lackluster key texture on the Recital. On top of that, the Recital Pro and the Recital digital piano share the same hammer action technology, making them exactly the same in terms of feel and playability.

One of the upsides of both pianos is that they have a form of scaled hammer action. Now, this won’t be as accurate as the Yamaha GHS system, but it’s really good for its price range. With both the Alesis Recital and the Recital Pro, you get a fully-weighted keyboard. On top of that, the weight on the left side is slightly heavier than the right side, which adds an entirely new layer of realism to the pianos.

When playing both models, I found the weight exactly the same. While it is on the heavier side, this isn’t that big of a deal. And since you can adjust the touch response of the piano to the weight of your touch, it’s easy to find just the right sweet spot for your playing style.

One complaint I had about the hammer action was that it was fairly loud. When you play these pianos, you can definitely hear it when you press down on the keys. Now, this isn’t exactly a con or major flaw, but when making a comprehensive review, you have to nit-pick the fine details to paint a clear picture.

The key texture of both of these pianos was a major letdown for me. When I first tried out the Alesis Recital, I was blown away by the hammer action for the price. However, one of the flaws that stood out to me were the glossy keys. One thing that could’ve been improved with the Recital is that the glossy finish on the keys took away a lot of the realism of the piano. The key’s texture doesn’t resemble ebony and ivory keys at all, and if you play a lot of acoustic piano, this is a very noticeable and almost glaring difference.

Considering the key texture was a major complaint I had with the Alesis Recital, I expected the Recital Pro to work on that and fix the issue. Sadly, this wasn’t the case. So, when playing the Recital Pro, you still have to deal with the glossy and slipper key texture of the Alesis Recital. If you’re a beginner, this won’t make a huge difference, but as you get better and familiarize yourself with wooden acoustic pianos, you’ll start to feel that something is off when playing these Alesis digital pianos.

When it comes to the tone generation techniques, both of these models share the same method. The Alesis Recital and the Recital Pro are both loaded with a bunch of high-quality samples and recordings of real instruments. Then, whenever you press down on a key you trigger one or more of these samples, which is what produces the tone.

This is the standard tone generation method in this price range. In fact, some of the more expensive models out there from brands such as Yamaha, Casio, and even Alesis use sampling for their tones. So, it isn’t exactly a let-down that the Recital and Recital Pro use sampling for the voices.

With that said, the quality of the samples on both these pianos are fairly high. One of the reasons for this could be that the company made sure to include the natural decay of the sound when recording the sample. While this takes up more memory, it makes for a much more realistic voice that very clearly resembles an acoustic piano.

Since the Alesis Recital is the most basic of this Alesis product line, it also contains the smallest number of voices. On the Alesis Recital, you only have 5 different voices to choose from. If you’re a beginner, this covers all the basic piano and non-piano tones you’ll need, but it’s undeniable that this is a very limited sound library. With that said, since this is a piano specifically designed for beginners, it’s no big deal but it just would’ve been nice to see a more varied sound library even for the basic model.

The Alesis Recital Pro, on the other hand, contains 12 different voices. Now, compared to some of the other keyboards out there, this might seem limited. However, keep in mind that all of these voices are top-quality and digital pianos aren’t designed to house hundreds of different voices anyway. With the Recital Pro, you get to choose between different types of pianos, synths, bass, and even string sounds, which gives you a lot of tonal variety.

At first glance, the piano features of these two instruments seem the same. And for the most part, that rings true. Both the Alesis Recital and the Alesis Recital Pro feature 3 different playing modes, MIDI connectivity, and they even have the same polyphony.

So, what made the Recital Pro the winner?

When you play either of these pianos, there are three different playing modes from which you can choose. These are dual mode, lesson mode, or split mode. Now, keep in mind that these modes may have different names on the two instruments, but they serve the same function.

With dual mode, you can blend two different voices together. So, for example, you can load a string voice and a piano voice at the same time. With this combination, you can create a much deeper, richer, and unique tone that is great for accompaniment. You can even mix and match whatever voices you want to create your own unique sound.

With split mode, you can divide the piano into two definite zones with different voices. A great example of this is loading a bass voice on the left and a piano voice on the right, allowing you to play basslines, chords, and melodies at the same time. This is great for performances as it gives the illusion of playing two instruments at a time.

The main reason the Alesis Recital Pro was the winner when it came to the piano features was because of the effects. The Alesis Recital comes with built-in reverb. If you’re  a beginner pianist, this is more than enough to add a lot of depth and richness to your tone. However, if you’re playing different styles of music and want a more unique tone, you’re going to need more effects than that.

While the Alesis Recital Pro doesn’t offer a full effects set for performing, it does have chorus and modulation effects on top of the built-in reverb. If you’re a beginner, it will take some time to figure out what these effects do and how you can use them in your music. However, once you get the hang of it, these effects become very useful tools to have in your arsenal.

These two pianos come from the same brand, product line, and sport a ton of similarities. This is about what was expected from two of the top beginner pianos on the market today and was one of the reasons creating this comparison was so fun.

One of the major similarities between the two is the feel and hammer action. Since these pianos are more budget friendly than the other ones on the market today, you can’t expect the best hammer action out there. And for the most part, the Alesis models can compete with other options in and out of their price range. However, they both share the lackluster key texture which I found to be a major letdown.

Additionally, these pianos both have the same maximum polyphony of 128. This allows you to play dense chords without any problem at all, and is more than enough for beginners and advanced players alike. On top of that, both pianos have MIDI capabilities, which is an incredibly important feature for just about anyone who wants to integrate their piano with their computer or smartphone.