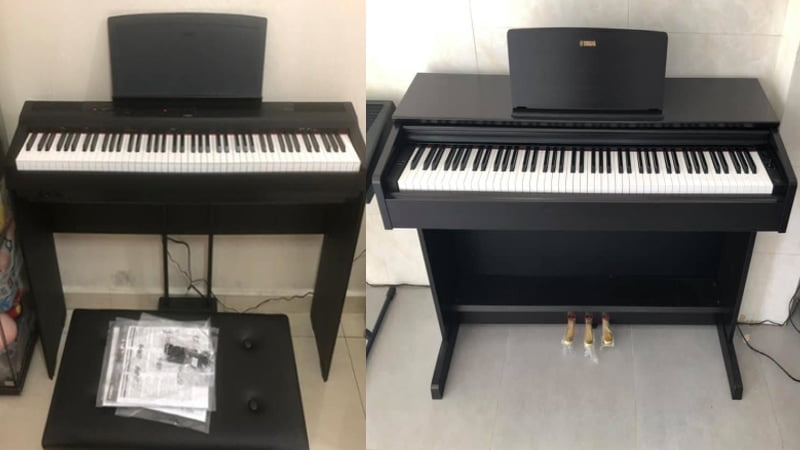 Find out why the Yamaha P125 is a better option for pianists in this Yamaha YDP 103 vs P125 review.

I tested out these two pianos myself. And while the YDP-103 offered great features for the price, it couldn’t beat the flexibility of the P-125.

Having a console digital piano is great, but it’s also very limiting. On the other hand, even if a portable digital piano won’t offer the same realism as console pianos, you’ll quickly see why they’re the better investment in this Yamaha YDP-103 vs Yamaha P-125 comparison.

Keep reading to see how the P-125 beat out the Yamaha YDP-103 console digital piano.

Comparing two digital pianos is a pretty tough task. So, for this comparison, I decided to compare both of the pianos based on their features. And after robust testing, I found the Yamaha P-125 to win over the YDP-103 with a score of 2-1.

So, the competition was close. But by the end, the P-125 came out on top because of its versatility. In this section, I’ll get into the details of my review of both pianos to show you why I believe the P-125 to be the better option for most pianists.

Tone is probably the most important feature to consider with digital pianos. And between the YDP-103 and the P-125, the P-125 is the clear winner. Not only does it have a more sophisticated tone engine, it has a wider sound library, making it the higher-quality and more versatile pick.

Let’s start with how both pianos generate their tones. The Yamaha YDP-103 uses AWM Stereo Sampling. This is the standard tone engine for most Yamaha pianos in this price range. It generates sounds using pre-recorded samples.

However, AWM Stereo Sampling is a bit better than other sampling-based tone generators because it contains more information. Yamaha used high-quality recording equipment to load very detailed and layered samples into the piano, which is how to produce realistic piano tones.

On the flip side, the Yamaha P-125 uses the Pure CF Piano Sound. This tone engine uses samples recorded directly from Yamaha CF Grand Pianos, which are some of the best grand pianos on the market. That way, you get incredibly crisp and bright tones that easily beat out other pianos in its price range.

So, regarding sound quality, the Yamaha P-125 is the clear winner. When I tested both pianos out, I was a bit surprised at how they both produced great tones. But after careful consideration, it was evident that the Yamaha P-125 produces more realistic tones.

Another reason the Yamaha P-125 won the tone comparison was its sound library. This piano has over 24 tones loaded into it, which is way more than other digital pianos. The Yamaha P-125 has a fairly wide set of piano tones to choose from, along with electric piano, bass, and string sounds.

This gives players a lot of versatility. That way, you can use the piano for many styles of music. So, whether you’re a rock, classical, blues, or jazz pianist, the Yamaha P-125 has all the sounds you need to fill out the piano’s sonic space.

The Yamaha YDP-103 also has a fairly varied sound library. It comes with 10 different tones, which is already a lot for a digital console piano. And while you get some variety, it simply doesn’t compare to the variety you get on the Yamaha P-125, which is why it lost out in this comparison.

One category where the YDP-103 won out was in terms of feel and playability. As a console digital piano, the YDP-103 feels way more realistic than the P-125. This is primarily due to the hammer action and key texture, both of which are top quality.

While I’m not saying that the P-125 doesn’t have a realistic feel, I found that it wasn’t as good as the YDP-103 in this regard.

This refers to the weight of the keys. And luckily, both of these pianos have GHS (graded hammer standard) weighted keys. This is a Yamaha hammer action system designed to emulate the slight weight differences you feel when playing an acoustic piano.

That means the lower keys on these pianos will be slightly heavier than the higher keys. Again, the difference is subtle, but it’s very noticeable, especially if you’re an experienced pianist.

Granted, the GHS system isn’t as good as Yamaha’s GH3, which is used on higher-end pianos. But after testing out other pianos in this range, I found that Yamaha’s GHS system easily beats out others in its price range.

So, if you’re looking for a digital piano with a realistic weight that exceeds its price range, either of these pianos will do you good.

My biggest complaint with the P-125 is the key texture. Like many other portable digital pianos, the P-125 uses glossy plastic keys. Now, this isn’t that big of a deal because of the great GHS system in place, it does take away a fair amount of the realism.

When I first tested out these pianos, I instantly felt the plastic keys. Since I play many acoustic pianos, the difference is evident. That’s why I really appreciated the fact that the YDP-103 has slightly textured keys.

The YDP-103’s keys have a specific coating that gives off a matte finish and feels closer to the wooden keys of an acoustic piano. Again, they still have a slightly plastic-like feel and aren’t 100% similar to wooden keys, but they definitely do a better job than the P-125’s glossy plastic keys.

The biggest benefit of console digital pianos is that they feel more realistic. And if getting a digital piano with a realistic feel is a top priority for you, then the YDP-103 might actually be the better choice.

The last comparison point I had with these two pianos was the extra features. This refers to the polyphony, extra playing modes, and effects on the piano. And as you’d expect, the portable Yamaha P-125 comes with way more extra piano features that make this a more flexible piano when compared to the YDP-103.

Firstly, let’s look at the playing modes. The Yamaha P-125 comes with split, layer, duo, and recording modes. The YDP-103 only features duo mode, which allows you to split the piano into two smaller pianos which is ideal for piano lessons and duets.

Since the YDP-103 is a console digital piano, it doesn’t need any other mode aside from the duo mode. This is why it’s a great option for piano lessons, but since it lacks some of the other playing modes, this is a pretty limited piano.

The extra modes on the Yamaha P-125 are very useful. You can use split mode to play two separate tones at the same time and make it sound like you’re playing another instrument. Or, you can use layering mode to blend different voices together, creating a unique sound that’s great for live performances.

The most important effect of having a digital piano is reverb. And luckily, both of these pianos come with reverb effects. However, the Yamaha P-125 takes it a step further by having IAC, resonance control, and a sound boost.

These aren’t exactly ground-breaking effects and only make a slight difference. But if you’re very particular about your tone and you want to have the power to make very slight adjustments to your piano’s sound, the P-125 makes it easier to do that.

Polyphony isn’t as big of a deal nowadays as it used to be. We have better computers now, so it’s easier to create pianos with large maximum polyphony to play wide and dense chords. That said, the P-125 still has better polyphony than the YDP-103.

These pianos aren’t that similar. In fact, I enjoyed making this comparison because of how different they are from each other.

These are two completely different pianos. Despite being made by the same brand and having the same hammer action system, they are very distinct from each other. One is portable and the other is a console digital piano, so you’ll have a hard time making a long list of similarities between the two.

At the end of the day, the Yamaha P-125 is the more flexible option. You have more tones, better sound quality, and all the features you need from a modern piano.

If you’re looking for a piano that you plan on keeping in one place, the Yamaha YDP-103 is a great option. This is one of the most affordable console pianos on the market and is a great buy if you want to have a console piano at home.

But in most cases, I would recommend the P-125 over the YDP-103 because of its versatility.

Quick Rundown of the Yamaha YDP 103