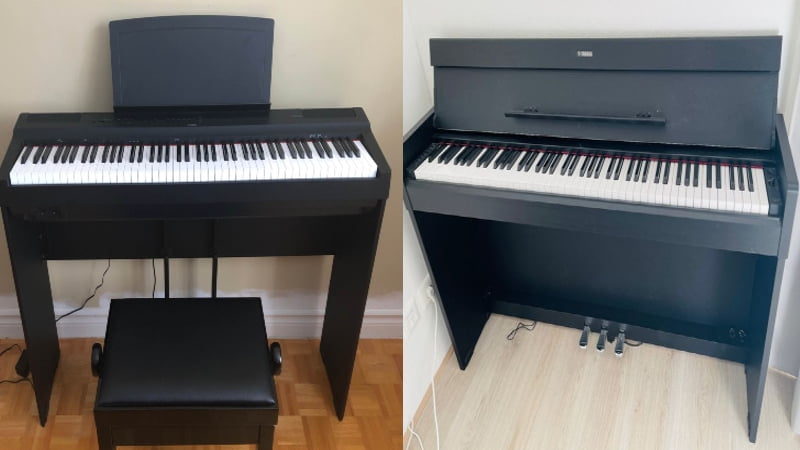 Find out which piano is worth your money in this Yamaha P125 vs YDP S34 comparison.

There’s no doubt that Yamaha is one of the most popular digital piano brands today. And two models that make for a great comparison are the P-125 and the YDP-S34.

These pianos are in the same price range and come from the same brand but they couldn’t be more different. That said, which one is the better investment for pianists?

Well, after a bunch of tests and research, I found that the YDP-S34 offers a bit more value for the money. Yes, it’s a bit more expensive, but it comes with top-tier tones, a realistic feel, and a versatile set of piano features.

While I really liked the versatility of the P-125, the YDP-S34 came out as the more premium piano. So, if you’re looking for a piano that offers the most value for the money, I would recommend the YDP-S34.

That said, the P-125 still comes with a bunch of great features that any pianist would love.

And if you’re looking for the full details of why I prefer the YDP-S34, you’ve come to the right place. I’ll be comparing both of these pianos in this Yamaha P-125 vs YDP-S34 head-to-head matchup, so you’ll learn the pros and cons of both pianos.

That way, you can easily find the best fit for your needs.

Comparing two digital pianos is no easy task. But since these two pianos are so different from each other, I had a lot of fun comparing the different features to find out the better option. And after all the tests, the Yamaha YDP-S34 came out on top with a score of 3-2.

So, even if the YDP-S34 eventually won this comparison, it was a close fight. Keep reading to learn more details about why the Yamaha YDP-S34 is the better option compared to the Yamaha P-125.

One of the most important features I consider when buying a digital piano is the feel. A good digital piano is one that can perfectly replicate the feel of a real acoustic piano. And between these two models, I found that the YDP-S34 does a better job.

Even if they use the same hammer action system, the YDP-S34 comes with matted keytops, which gives it a slight edge over the Yamaha P-125.

Let’s start by talking about the hammer action. Luckily, both of these pianos use the Graded Hammer Standard or GHS system from Yamaha. This is one of the best hammer action systems in this price range as it almost perfectly replicates the subtle weight differences in an acoustic piano’s keys.

Regardless of which of these pianos you choose, you can expect realistic hammer action. Both pianos have heavier keys on the lower end and lighter keys on the higher end. This is how acoustic pianos are set up as well and the reason both pianos are great options for anyone that needs a realistic weight when playing.

When trying out the pianos myself, I could barely tell the difference in terms of weight. However, since the Yamaha YDP-S34 had matted keytops, it admittedly felts more realistic than the P-125.

If you’re a beginner, this won’t be that big of a deal. However, once you have experience playing on different pianos, you’ll notice the weird texture of the glossy keys. So, the P-125 doesn’t offer as realistic a feel as I would like.

On the flip side, the YDP-S34 comes with textured keys. While they are made of plastic, Yamaha added a coating on top of the keys to better replicate the texture of real wooden keys. And when you play the YDP-S34, you’ll find that it’s much closer to the feel of an acoustic piano compared to the P-125.

So, when it came down to the feel and playability of the pianos, I found that the YDP-S34 did a much better job.

Another crucial factor to consider when shopping for a digital piano is the tone. You always want a piano that produces a high-quality realistic tone. And when I tested out these pianos, I learned that the YDP-S34 has a slightly more realistic piano tone.

However, the YDP-S34 also has a limited sound library. The P-125, however, had a much wider sound library that gave me more options when it came to the sounds I could play. So, by the end of it, I figured that these two pianos were tied in terms of tone, so they both came out with a point.

The tone generator on the Yamaha P-125 isn’t as good as the one on the YDP-S34. The YDP-S34 uses the more modern Yamaha tone engine, which is why the piano tones are much brighter and richer on the YDP-S34.

The P-125 uses the Pure CF Sound Engine. This tone engine uses high-quality samples recorded from real Yamaha CF pianos. So, you can expect this piano to replicate the rich tones of certain Yamaha Grand Pianos.

The YDP-S34 uses a similar tone engine, but it uses a newer version. The CFX Sound Engine on the YDP-S34 also uses samples from Yamaha CF grand pianos, but the technology and techniques used to record the samples are more advanced.

That way, the sounds from the YDP-S34 sound way closer to a real grand piano compared to the P-125. Again, you won’t really be able to tell the difference if you aren’t an experienced pianist, but there’s no doubt in my mind that the YDP-S34 comes with much richer tones than the P-125.

The 24 voices include various acoustic and electric piano sounds, along with various strings, bass, and synth voices. That way, you can find the right voice to use for any song or style of music.

The YDP-S34, on the other hand, only has 10 voices. This is because this piano is designed for home use and isn’t supposed to be as flexible as the P-125. So, even if the voices on the YDP-S34 are top-quality, they are also limited.

To wrap up this comparison, I decided to compare the extra piano features of both pianos. Specifically, I decided to look at the effects and playing modes. And even if the P-125 comes with more playing modes, the YDP-S34 has more useful effects, so they were tied in this category.

The Yamaha P-125 comes with split, dual, and duo modes. These are very useful playing modes and make for a very versatile instrument.

With split mode, you can divide the piano into two sections, with each section having its own voice. This is great for live settings as you can put one voice on the left side and another on the right side, giving the illusion that you’re playing two instruments.

Dual mode blends two different voices. This allows you to experiment with different combinations and create unique tones that fit your needs and preferences.

Lastly, the duo mode is great for piano lessons. This mode splits the keyboard into two smaller pianos that have the same pitch and timbre. That way, the teacher and student can play along with each other without worrying about pitch differences.

The Yamaha YDP-S34, on the other hand, only has two of these playing modes. While it has dual and duo modes, it doesn’t come with split mode. So, while you get a couple of different playing modes to experiment with, your options are a bit limited on the YDP-S34.

When it comes to effects. Both pianos come with very useful and versatile effects sets. The P-125 comes with reverb, damper resonance, sound boost, and IAC. These are all great as they give you full control over your tone and allow you to make subtle tweaks to make the piano sound exactly how you want.

The YDP-S34 comes with all of those effects except a sound boost. Instead of a sound boost, it comes with stereophonic optimization, which does wonders to sound quality. Personally, I found the effects on the YDP-S34 to be more useful as it gave me more control over the nuance of the piano tones.

However, there are also many pianists who might find the P-125’s effects more useful as it’s all a matter of preference.

As I said at the start of this comparison, these are very different pianos. Aside from the fact that they are made by the same brand, these pianos have very different features. They have their own tone engines, sound libraries, and even effects sets. So, comparing the two was a very fun experience.

That said, there are still some similarities worth noting.

The biggest of these similarities is the polyphony. Both of these pianos have 192-note maximum polyphony which allows you to play wide and dense chords with absolute clarity. This also comes in handy when using the dual or duo modes as it gives the piano more power to clearly play all those samples at the same time.

But that’s where the similarities end. If you’re looking for a versatile piano to bring around with you, the P-125 might be the better option. But if you want top-tier piano tones, a great set of effects, and a realistic feel, the Yamaha YDP-S34 is the better option.