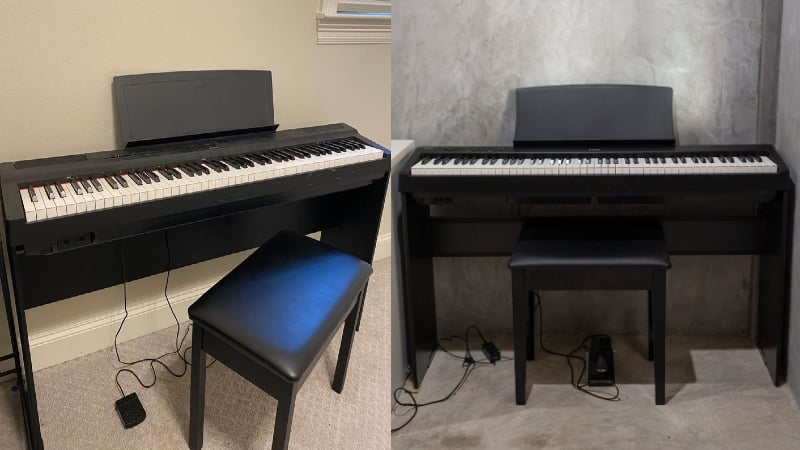 In this Yamaha P125 vs Kawai ES110, you’ll learn all the features of both pianos and why the Yamaha P-125 has a slight edge!

When I was shopping for my own digital piano for home use, two models that instantly caught my eye were the Yamaha P-125 and the Kawai ES-110. Both of these pianos came in at around the same price range, had a similar feature set, and came from reputable brands.

But which one did I prefer?

Well, this was a pretty hard choice to make. But after rigorous testing and research on the features of either piano, I found that the Yamaha P-125 was more my style. It had richer tones, a wider sound library, and just about everything I’d need from a piano at this price range.

That said, there were some cool features on the Kawai ES-110 that could serve you better. This includes the key texture and various playing modes on the piano.

So, while I preferred the Yamaha P-125, both pianos are great options. And in this Yamaha P-125 vs Kawai ES-110 review, I’ll be explaining the features and differences between both pianos.

And by the end, you’ll know exactly which model you want in your home.

Figuring out which of these two pianos is the better option was a pretty tough task. It can be hard to compare two pianos as it really boils down to personal preference at the end of the day.

So, to keep this comparison as objective as possible, I compared these pianos based on three specific features. And by the end of it, the score was 2-1 in favor of the Yamaha P-125. Since the Yamaha had better tones and a wider set of piano features, it narrowly took the win in this comparison.

However, there were still a couple of cool features of the ES-110 worth noting, and I’ll explain all of that and more in the following sections.

We’ll take a detailed look at both pianos below. That way, you won’t have a hard time figuring out which one is better fit for your need.

It’s very important to find a digital piano that feels similar to an acoustic piano. If the piano is obviously digital, it can get in the way of your playing and affect the quality. However, I was happy to find out that both of these pianos do a great job of replicating the weight on a real acoustic piano.

That said, the Kawai ES-110 comes with textured keys. This adds another layer of realism when playing the instrument and it’s the reason why the Kawai model feels slightly more realistic than the Yamaha P-125. So, when it comes to feel and playability, the Kawai edges out the win and grabs the point.

It’s almost impossible to tell the difference between these two pianos’ hammer action systems. While they are different systems, they accomplish the same goal which is emulating the slight weight differences between the heavy and light keys of the piano.

The Yamaha P-125 uses the Graded Hammer Standard, which is a premier feature on many Yamaha digital pianos. On the flip side, the Kawai ES-110 uses responsive hammer compact action. Both of these hammer action systems feature heavier keys on the lower side of the piano and lighter keys on the higher side.

When trying out both of the pianos myself, I could barely tell the difference in hammer action. This means that both pianos perform very well in terms of hammer action. So, if you’re looking for a digital piano that emulates the weight of a real acoustic piano, either of these options will serve you very well.

Another thing you want to consider when testing out the feel of the piano is the key texture. While these models were tied in terms of hammer action, the Kawai ES-110 easily wins in terms of key texture.

Both of these pianos use plastic keys, which can get in the way of realism. The Yamaha doesn’t do anything to address the weird glossy texture on its keys. On the flip side, the Kawai features a matte coating on top of the piano’s keys which are designed to make them feel closer to real wooden keys.

When trying the keys out myself, I have to say that they weren’t exactly the same as wooden keys. However, they were definitely much better than plastic.

So, the difference is very minimal, but the Kawai ES-110 narrowly edges out the Yamaha P-125 when it comes to feel. And while this might seem like I’m nit-picking, these small details make a huge difference when shopping for a piano.

But while the Kawai ES-110 had a superior and more realistic feel than the Yamaha P-125, this wasn’t my only point of comparison. Keep reading to learn which areas that Yamaha P-125 beat out the Kawai model and why I declared it the winner.

The next important feature I used as a point of comparison was the tone. After all, digital pianos are only worth the investment if they sound good. And while both pianos produce fairly realistic piano tones, it’s hard to beat out Yamaha in this category.

Yamaha digital pianos are consistently known for their top-tier tones, and the Yamaha P-125 is no exception. Granted, the Kawai ES-110 does come with a varied sound library with many great sounds, but it can’t beat out the quality and variety available on the Yamaha P-125.

Firstly, let’s compare the tone engines of both pianos. Both of these pianos use samples to generate tones. And while the Kawai uses Harmonic Imaging, the Yamaha P-125 uses the Purce CF Piano Sound, which is one fo the most sought-after tone generators on the market today.

The Pure CF Sound Engine gets its samples from the Yamaha CF Grand Pianos, which are some of the best grand pianos available today. This allows the Yamaha P-125 to feature very realistic and bright piano tones, which is one of the reasons the Yamaha P-125 ended up winning in this comparison.

Now the Kawai ES-110 comes with great piano tones as well, and the Harmonic Imaging system captures a lot of detail in the sound. But when compared to the Pure CF sounds on the Yamaha P-125, the Yamaha definitively comes out on top.

The Yamaha P-125 comes with over 24 different sounds. Aside from the grand piano tones, you also have an electric piano, strings, bass, and synth options. That way, you can use this piano for many styles of music and not just for classical pieces.

The Kawai also has a fairly large library when compared to other pianos on the market. However, it falls short of the Yamaha P-125 since it only offers 19 different sounds. You get similar sound categories with the Kawai, but you won’t have as many options in each category, which is why the Yamaha P-125 won this comparison point.

My last comparison criteria was the piano features on either model. Both of these pianos came with cool features that make them versatile and add a lot of value, but the Yamaha P-125 came out on top again. With the different playing modes and very flexible effects on this model, the Kawai ES-110 could barely put up a fight.

This is one area where both of these pianos are tied. This is because both pianos offer almost the same set of playing modes. Both pianos feature duos, dual, and recording modes. That way, you can use the pianos to blend different sounds, play piano duets, and even record your own playing to listen for parts that need improvement.

Another cool feature of both pianos is that they have split mode. With split mode, you can load two voices at the same time, allowing you to seem like you are playing two instruments at once.

While all these extra playing modes aren’t exactly necessary, they are still very useful. And if you’re a beginner or intermediate pianist looking to experiment with your instrument, both of these models offer a lot of room for that.

When it comes to effects, the Yamaha P-125 has a very slight edge. This is because on top of the different types of reverb, you get IAC, damper resonance, and a sound boost. These effects give you much more control over your tone and allow you to tweak your sound slightly until it fits your tastes.

The Kawai ES-110 only came with reverb and brilliance effects. And while these do give you some control over your sound, it doesn’t offer as much versatility as the Yamaha P-125, which is why the Yamaha P-125 ultimately won this comparison.

I found that these are two very different pianos, which is one of the reasons why comparing them was so fun. However, I still found these pianos shared a couple of similarities that are more than worth noting.

For example, they have the same polyphony. With 192-note max polyphony, both of these pianos can play wide and spread-out chords with many notes. This also comes in handy when using split and duo modes as it allows the piano to play each sound with much clarity.

But despite all these similarities, I still find the Yamaha P-125 to have more value. Even if the feel is arguably better on the Kawai, the Yamaha P-125 is really flexible and available at a relatively low price, which is why this is the piano I ended up choosing for my needs.

Quick Rundown of the Kawai ES110