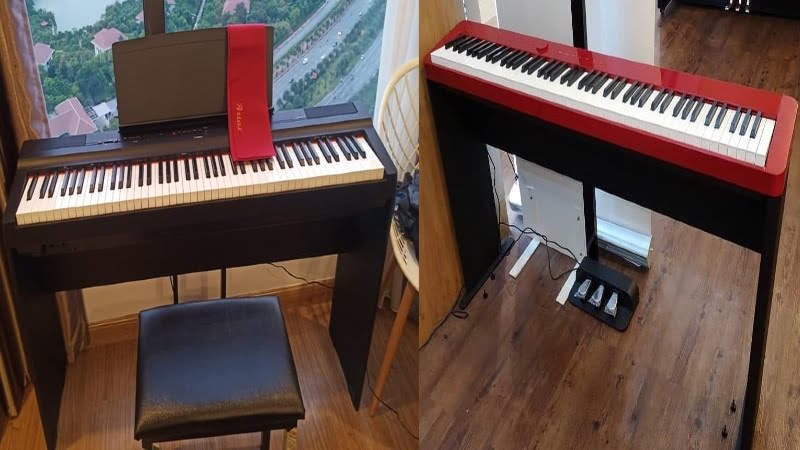 Finding a good digital piano nowadays is hard because of all the options available. But two particular pianos that are pretty popular amongst beginners and intermediate students are the Yamaha P125 and the Casio PX-S1000.

Both of these pianos come in at around the same price and have features that exceed their price range.

And after thorough comparisons and testing, I found that the Yamaha P125 comes out on top, but only slightly.

Well, the answer is a bit complicated. In a nutshell, it’s because the Yamaha P125 has a better tone and a wider set of features. But if you’re looking for a more detailed analysis of why the Yamaha P125 is the better option, you’ve come to the right place.

I’ll get into the features and benefits of both pianos in this review, so you’ll know exactly which one is right for you.

Comparing two digital pianos can be hard because there are so many factors to consider. But to simplify things, I chose to compare both pianos based on three particular criteria that are integral to digital pianos. And at the end of it all, the Yamaha P125 narrowly edged out a win with a score of 2-1.

While the Casio PX-S1000 definitely had a more realistic feel to it than the Yamaha, the latter had much better tone and a better set of piano features. So, I ultimately dubbed the Yamaha P125 the winner in this comparison.

One category wherein the Casio PX-S1000 beat out the Yamaha P125 was in feel and playability. This is a major consideration for many pianists when buying a digital piano as you always want to get a model that replicates the feel of an acoustic piano.

The first thing I check out when testing a piano’s feel is the weight of the keys, which is known as hammer action. And even if both of these pianos are on the more affordable end of the spectrum, they have great hammer action systems that replicate the feel of an acoustic piano.

The Yamaha P125 uses the Graded Hammer Standard or GHS, which is a signature feature on many Yamaha pianos. Just like with acoustic pianos, the lower keys are significantly heavier than the higher keys.

On the flip side, the Casio PX-S1000 uses Smart Scaled Hammer Action. While this system isn’t as popular as GHS, I found it to be just as effective. In fact, when testing both pianos out, I could barely tell the difference in weight.

The thing that set the Casio PX-S1000 apart from the Yamaha P125 was the key texture. The Yamaha P125, despite having a realistic hammer action system, uses plastic keys. Not just that, but they are glossy piano keys.

If you’re a beginner, this won’t be that big of a deal. However, experienced pianists will instantly notice a weird difference in the way the keys feel on your fingers. And while this isn’t a complete deal-breaker, it’s something worth considering.

While the Casio PX-S1000 also uses plastic keys, the keys are also textured. This is to replicate the texture of wooden piano keys. These textured keys don’t perfectly simulate wooden keys, but they definitely do a better job at it than the Yamaha P125.

The next point of comparison I had between these two pianos was the tone. For the price, both these pianos produce a great range of tones. However, the Yamaha P125 has a slightly better tone engine and a more varied sound library, which is why it took the point.

The Yamaha P125 uses the Pure CF Sound Engine. This is one of the more premium Yamaha sound engines that aims to replicate the sound of Yamaha’s CF Grand Pianos, which are some of the most sought-after models in the industry.

So, you can expect vibrant and bright piano tones from the Yamaha P125. Of course, you won’t be able to perfectly replicate the volume and density of a grand piano digitally. But when compared to the competition in the same price range, the Pure CF Sound Engine is one of the best.

The Casio model uses the AiR Sound Source. This tone engine aims to replicate the way sound waves from real pianos travel through the air. And while it produces a fairly realistic piano sound, it doesn’t sound as rich and grand as the piano tones on the Yamaha P125.

Digital pianos don’t have the most flexible sound libraries. However, I found that both of these pianos have a pretty varied sound collection for the price. The Casio PX-S1000 comes with 18 different sounds, while the Yamaha comes with 24.

Both pianos have the basic set of tones you’d want to form a digital piano. This includes a selection of acoustic piano sounds, electric pianos, bass tones, and some string sounds.

The difference isn’t huge, but the Yamaha P125 has a slightly larger sound bank. So, you will be able to experiment with more tones with this piano. So, if you’re looking for a flexible piano that you can use for different genres, the Yamaha P125 might be the better pick.

The last feature I compared between these two pianos are the extras. This includes the effects and playing modes. When it comes to playing modes, both pianos are basically tied. But the Yamaha P125 has more useful effects, which is why I ultimately gave it the point.

The effects on the Casio PX-S1000 are Surround Sound and Hall Reverb. These are designed to add depth to the piano tones and give the player a bit more control. And while these effects are pretty useful, they aren’t as good as the effects on the Yamaha.

To start, the Yamaha P125 comes with a reverb effect that has various presets. That way, you can further tweak the reverb until it fits your tastes. On top of that, it has IAC, damper resonance, and a sound boost effect.

These are all very useful when performing or just playing alone. So, if you’re looking for a piano that gives you a lot of tone control and has sounds that fit many genres, the Yamaha P125 might be the better option.

Modern digital pianos are expected to come with a range of playing modes. Both of these pianos have recording, split, and dual mode, which is all you really need in a digital piano.

The Casio PX-S1000 has a slight edge with its recording mode because you can layer more tracks on top of each other. However, neither piano records the best quality sound and this feature is more for practicing and creating demos of different songs.

So, even if the Casio PX-S1000 has a slightly better recording mode, it wasn’t enough for me to give it the win in this comparison.

There are quite a few notable similarities between these two pianos. To start, they are both portable digital pianos. So, you can easily bring them with you to jams, rehearsals, and even performances.

Both of these pianos are in the same price range. While they technically fall under budget-friendly pianos, they are a bit more expensive than some beginner models on the market. So, these pianos are good for beginner pianists starting to take the instrument seriously or intermediate players looking for reliable and relatively affordable instruments.

Another cool similarity between both pianos is that they can connect with different apps on your phone. This allows you to access more features and tweak the piano tones down to the finest details. That said, both pianos use different sets of apps, so make sure to download the right apps for your piano.

But other than that, these are very different pianos that have their own set of benefits. And while I chose the Yamaha P125 as the winner, there are many pianos who would enjoy the Casio PX-S1000 more.