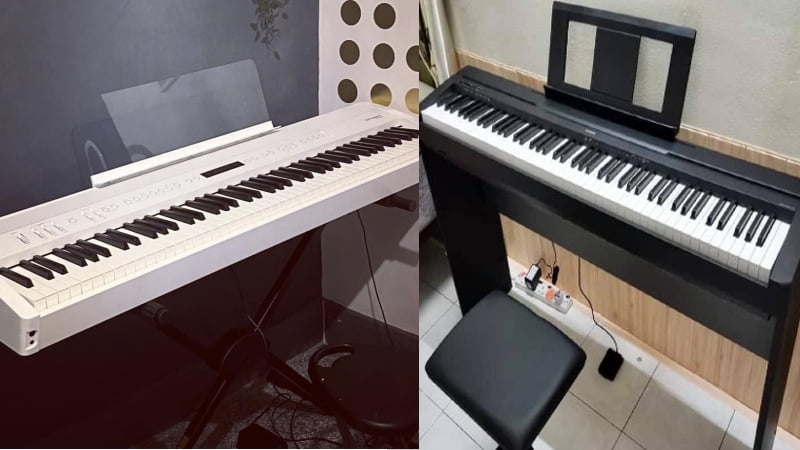 Two digital piano giants are going head to head once more with the Yamaha P125 vs Roland FP 60. One comes out bigger and better. But is it a smart investment?

Two of the most popular digital piano manufacturers in the world, both of Japanese origin, are Yamaha and Roland. Although the former has been around far longer than the latter, these two are pretty much evenly matched in numerous aspects.

In fact, the companies have a healthy competition going on with each other; with one releasing a new model and the other launching a version that could rival that. This is actually the case with several of their models such as the P125 of Yamaha and the FP 60 of Roland.

The P115, marketed as an entry-level piece, had a whole lot more than just the nuts and bolts.

And it became an instant hit, dominating its contemporaries created by other manufacturers including Roland’s FP 60. And Yamaha wasn’t done with their revamps, proven after they announced the P115’s successor – the P125.

But Roland raised the stakes when they designed the FP 60, packing way more than what is expected of a beginner digital piano. It seems that fan-favorite Yamaha P125 is in a bit of trouble.

Aside from running through the specs of each model, I tried these two side by side to come up with a fairer assessment. Read more below to see which between the Yamaha P125 vs Roland FP 60 comes out on top.

When Yamaha released the P125 in April 2018, it became an immediate favorite among many beginners and intermediate-level players. It is a real treat with full 88 keys, great feel, awesome sound, and numerous features and functions. Best of all, it comes with a great price tag.

In September of the same year, Roland announced their new digital piano – the FP 60. And this wowed many because it bested many digital piano models that belonged in the same category in so many points. It had higher polyphony, a hundred times more voices, several recording formats, way more powerful amplification, and so many more.

But with all those additions come a few repercussions – the FP 60 is heavier than most and way more expensive than its current match-up here, the P125.

It’s easy to immediately conclude that Roland’s contender is the better buy, just by looking at the specs. But it’s hard to discount Yamaha’s craftsmanship and technology – both very much prominent in the sound and feel of the P125.

After a very thorough assessment including playing the two side by side, I have come to the conclusion that the FP 60 comes out as the victor in the Yamaha P125 vs Roland FP 60 competition – but only by a very small margin.

Often overlooked by first-timers, this facet is incredibly important because digital pianos should feel nearly like real acoustic ones. It’s expected that entry level keyboard mechanisms won’t be made like uprights or grands, mainly to lower costs. But both the FP 60 and P125 are good enough in this regard. My tiny gripe with the Roland model is it’s quite pricey and they could have tried to do better.

The P125 is outfitted with Yamaha’s most basic mechanism – the Graded Hammer Standard. The keys are aptly weighted, heavier on the left and lighter on the right.

The FP 60 basically has the same system but named it as PHA-4 Standard. But what makes this markedly better is the addition of escapement. This mimics that slight notch felt when the key is pressed halfway on acoustic

The sound created on real acoustic pianos depends on the force placed on the keys. Both the Yamaha and Roland contenders have this feature. The former has four different settings: Hard, Medium, Soft, and Fixed. The latter lets you choose from 1 (the softest) to 100 (the hardest).

This detail refers to the texture of the keytops. Acoustic pianos are made of ivory or special wood which have slightly coarse, moisture-wicking surfaces. Both the P125 and the FP 60 are made of plain white plastic. I had hoped for better from both since these are not in any way cheap.

Roland and Yamaha have developed some of the most enviable digital piano samples, but I tried to manage my expectations with the featured models because they are entry-level pieces. I am pleasantly surprised that both the P125 and the FP 60 have realistic instrument sounds in their respective libraries.

The P125 is equipped with the Pure CF sound engine which takes four layers of samples from the company’s flagship CF III concert grand. And to ensure realism, the company added organic piano dynamics such as key-off simulation and string resonance.

The FP 60, on the other hand, has the SUPERNatural sound engine. To be honest, it’s pretty much the same as the tone generator used by Yamaha, hence the tie.

This is the aspect where Roland overpowers its competitor by over a hundred percent. Yamaha P125’s number of voices total to 24 (four grand piano sounds) while Roland’s FP 60 has a whopping 351 (15 acoustic piano sounds). The latter even has drum kits, marimba, and acoustic guitar in their arsenal, making this digital piano a must-have for performers.

Aside from price and portability, the innumerable functions and features on digital pianos make it a better buy over acoustic uprights or grands.

The P125 does not disappoint in this regard – it has all the basic accoutrements that any beginner would need. However, Roland went completely over the top in loading the FP 60 with so many functions, consequently beating Yamaha and a host of other companies.

First-timers should always be on the lookout for digital pianos with a polyphony of at least 100, because this will favor them in the long run.

The P125 was lauded by many for having 192. Its competitors at the time had 128 only or less. But even I was completely stunned with the 288-polyphony count on the FP 60. It was a real treat even for intermediate-level players and gigging musicians.

Additional functions such as Split, Duo, and Twin modes are very helpful for digital piano players as it allows them to do more in terms of learning and experimentation.

Yamaha has all three important playing modes noted above. Roland falls short here, lacking the Twin (aka Lesson) mode which could be very helpful for students who want to play side-by-side with their tutors.

It’s almost hard to keep up with the features and functions on the FP 60 – Ambience, Equalizer, Rotary Speaker, Modulation Speed, various types of Resonance for grand piano sounds, and so many more.

But while Roland’s FP 60 is packed, Yamaha outfitted their P125 with the must-haves and ensured quality. It has four types of Reverb, Intelligent Acoustic Control, and Sound Boost, just to name a few.

Both can record tracks internally – a great function that can help musicians capture their practice sessions or compositions. I do have to say that for their price, and the fact that both were launched in 2018, the two models can only capture a few.

The P125 can record up to three tracks (depending on the number of notes) in MIDI format. The FP 60 can capture one track of up to 70,000 notes in various playback formats: MIDI, WAV, and MP3.

The P125 does not disappoint in this aspect either. It has two headphone jacks (one conveniently situated in front), USB (Type B) to host, two AUX Out jacks for external amplification and mixers, and a jack for the pedal unit.

The FP 60 almost has the same types of connectivity, except that it has three pedal jacks (addition for Sostenuto and Soft) and two USB ports (Type A and B).

What I personally love about the Roland unit is the presence of Bluetooth connectivity. This feature makes it easier for everyone to connect to a phone or a pad to transfer and play audio files.

Although the Roland FP 60 is a bit more powerful with a total of 30W versus the 24W on the P125, I have to say that both are decent enough for portable pieces. Adding amplification isn’t a problem for either also, since both have line outs.

Aside from being portable 88-key digital pianos, Yamaha P125 vs Roland FP 60 are two completely different pieces. Anyone can see the stark discrepancies with the chart provided above but after trying these two side-by-side, the distinction can really be felt and heard.

While the FP 60  does so much better in the Yamaha P125 vs Roland FP 60 comparative report, I really think that the P125 is the better investment between the two.

Quick Rundown of the Roland FP 60