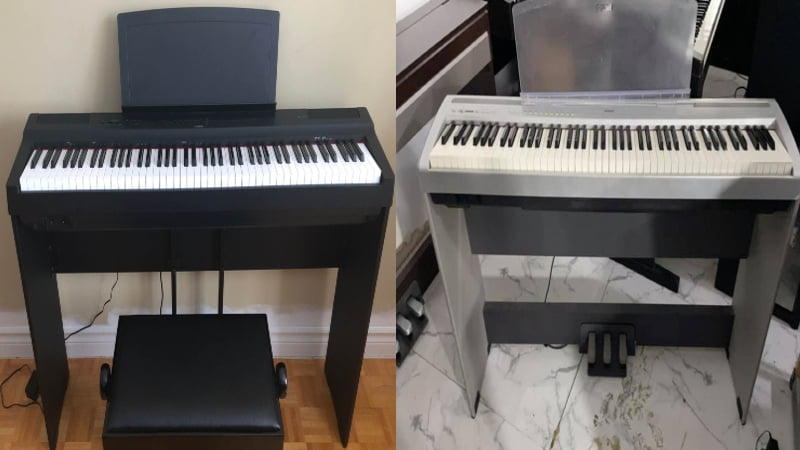 Would a digital piano made 10 years ago still be competitive in this day and age? See what a difference a decade makes in the Yamaha P125 vs P85 face-off.

Yamaha has been a leading manufacturing company in the music industry for over a century. When they released their first digital piano in 1983, it was a true innovation that awed the whole world. And they didn’t stop revamping their instruments to perfection or, at the very least, to move with the times.

The P or Portable series, marketed as digital stage pianos, became a huge hit when it was first introduced in the early 90s. Every single model made in that era has undergone numerous improvements, renamed, and then re-launched.

The main subject of this comparative review are two models under the aforementioned P-series: Yamaha P125 vs Yamaha P85. Released in 2007, the latter is the successor of the P-70, the first-ever Yamaha compact digital piano with a MIDI sequencer. The P-125, launched 11 years later, is the replacement of the highly-acclaimed P115.

WIth a over a 10-year gap in between these two, it does seem like that the newer model is the better option at this very moment. However, many digital piano enthusiasts still have high praises for the P85 for a few reasons.

The question now is: does it still make sense to invest in the low-cost P85 or does the enhanced P125 beat its predecessor in all aspects?

It’s easy to conclude that the P125 beats the P85 in all aspects except the price. It is, after all, 10 years ahead in technology and will have more modern features and functions that would be helpful for beginners and intermediate-level players.

However, many are still impressed with the older P85 mainly because it has all the basic needs a first-time player may need. I, for one, think that the key action on this model feels quite realistic – heavy enough that I don’t have to make a huge adjustment when playing with acoustic pianos. It’s also difficult to ignore that the P85 is several hundred dollars cheaper than the newer models.

Then again, for people who have tried the P-125, it is hard to discount the numerous adjustments made on it. Everything is way more advanced with this model including the hammer action, tone generation, sound effects, playing modes, speaker system, and connectivity capabilities.

All things considered, I’m giving this Yamaha P125 vs P85 match-up to the more recent model 4:1. Perhaps, the only reason for me to go for the outdated P-variant is because I can’t spend nearly a thousand bucks on a digital piano.

This particular chapter refers to how players perceive the key’s resistance and response when it is pressed. Musicians, beginners and experts alike, prefer a digital piano that feels almost the same as its acoustic relative.

In this regard, the newer P125 is the better option because it was more well-made in several aspects. The only unfortunate thing for me is that Yamaha couldn’t upgrade the feel of the keytops. It’s pretty much the same as the P85.

As I have noted earlier, one of the details I really like about Yamaha’s P85 is its weightedness. And this should not be surprising because the company has been refining the whole mechanism under the keys – the Graded Hammer System.

The P125 makes use of the very same hammer action – heavier at the left-most side where the bass keys are and lighter at the right where the trebles are.

Although the two models make use of the same technology, incremental adjustments have been made throughout the years. So while I do like the P85’s resistance, I can’t also deny that the P125 feels way more realistic.

In acoustic pianos, the volume and expression of the sound depends on the level of force put on the keys. Digital pianos recreate this facet by adding touch sensitivity. Both the P-models featured have four types: Fixed, Soft, Medium, and Hard. Beginners would benefit more if they choose the Hard setting because this feels more like the real thing.

Personally, it is slightly acceptable for the P85 to have keys made of smooth plastic. Not only was it made years ago, this could be had for a very low price of $300, if you’re lucky. But it’s really frustrating that Yamaha has not figured out a way to outfit the P125 with, at the very least, textured keys. With its price tag, I’m sure they can do more than just black matte keys.

With its wide array of prizewinning grand acoustic pianos, Yamaha has no trouble finding a source to sample their digital piano sounds. Although the P85’s performance in this aspect is topnotch, the company definitely upped the ante with their P125.

The P85 is outfitted with the AWM stereo sampling technology which involves recording several layers of the same sound. Although this is the oldest and most basic type of sampling by Yamaha, it still is one of the most reliable.

The tone generator of the P125 is called Pure CF which, in the simplest terms, also makes use of sampling. However, the sounds recorded are from the company’s CF grand pianos, the creme de la creme in the industry.

Interestingly, not a lot has changed between the two models in the span of ten years in this regard. Both have 10 voices and around the same number of pre-recorded songs.

One of the factors that makes digital pianos better than their acoustic counterparts is its wide array of features and functions. In this segment, you will see that a decade does make a difference when it comes to our two featured P-variants.

Most tutors agree that first time players are better off with a digital piano that has at least 100 max polyphony count. There may be a fewer number of notes that beginners would play during their first few lessons but this would surely increase in a short amount of time.

The P85 only has 64. This would have seemed enough when the instrument was first launched but it’s too measly now. The P125 has 192 – a great count even for virtuosos.

Most digital pianos made in the 90s have one basic playing mode – Layering. This allows for two different voices or instruments to be played at once.

The P125 bests the older P85 in this regard because it has two more on top of Layering. These are Split (bisecting the 88 keys into two keyboards, each playing different voices) and Lesson (bisecting the 88 keys into two keyboards, both playing one voice at the same octave). The last feature is an awesome addition for beginners because they can play the piano with their tutor side by side.

While the P125 was packed with numerous sound effects like Reverb, Intelligent Acoustic Control, Sound Boost, and so many more, the P85 only has one – Reverb.

The two digital pianos can record performances. However, the older variant can only capture one track with 65KB (11,000 notes) while the newer version can record two tracks up to 100KB. It is possible to transfer these tracks to an external device.

The P85 can be connected to another instrument via the MIDI In/Out. If you want to connect this to a computer to transfer files, you would need an additional USB-MIDI adapter.

On the other hand, P125 can be connected to an external device via USB Moreover, this digital piano can be linked to different apps which make the whole piano playing experience smoother and more efficient.

To be honest, the speakers of most P-models are sub-par, especially when compared to their contemporaries. But between the P125 and the P85, the former does have better amplification than the latter.

The usual items included in both sets are the power adaptor, music rest, and a plastic pedal or footswitch. The stand, soft case, headphones, or more specialized pedals are sold separately. Because the P125 is a newer model, you also have the option to get a bluetooth MIDI adapter and a phone connector for the apps.

There really are just a few points that these two P-models share. Both have 88 keys, are relatively lightweight, ergo portable, and are truly innovative during their time.

Despite the P85’s passable features and functions and its incredibly low price (if you do chance upon one – it has been discontinued for some time now), it is undeniable that the numerous upgrades made on the P125 makes it a better instrument than its predecessor. In this day and age, The high-tech, ultra-modern P125 comes out on top in the Yamaha P125 vs P85 head-to-head.

Quick Rundown of the Yamaha P85