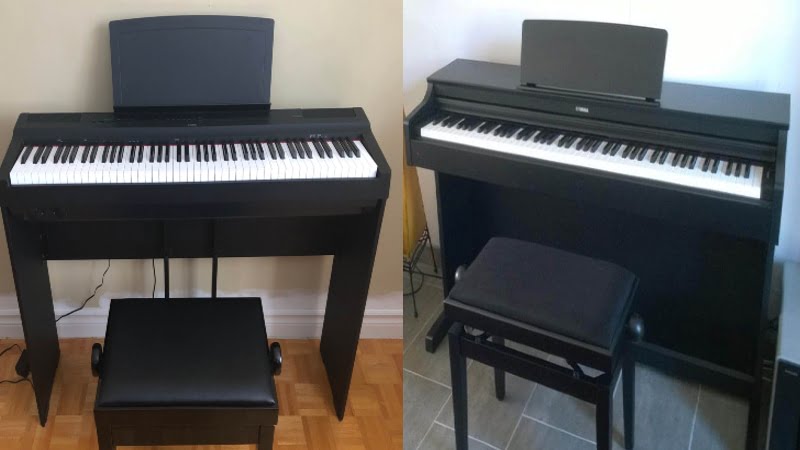 Find out which Yamaha piano is the best option for you in this Yamaha P125 vs YDP 164 comparison!

Yamaha is one of the world’s most popular digital and acoustic piano brands. And two digital pianos from the brand that are regularly put up against each other are the Yamaha P-125 and the Yamaha YDP-164.

Both of these pianos are loved in the piano community, so it’s easy to see why many people choose between the two when shopping for a digital piano.

And if you’re having a hard time choosing the right option for you, you’ve come to the right place.

After rigorous testing and research, I realized that the Yamaha P-125 is the better option simply because it’s more flexible. That said, there are still some benefits to the YDP-164, so there are many pianists who might find this to be the right piano for them.

In this Yamaha P-125 vs YDP-164 comparison, I’ll be looking closely at both pianos. We’ll dive into their features, pros, and cons so it will be much easier for you to find the right one for your needs.

It would be easy to assume that the YDP-164 is the better piano because it’s more expensive. And while the Yamaha YDP-164 is definitely high-quality, it can’t compete with the flexibility of the Yamaha P-125.

One of the most important features to consider when buying a digital piano is the feel. You always want to get a digital piano that replicates the feeling of playing an acoustic piano. And because the YDP-164 has textured keys and graded hammer action, I found that it feels way more realistic than the Yamaha P-125.

Despite the YDP-164 costing almost two times as much as the P-125, both pianos have the same hammer action system. You’ll find that the YDP-164 and the P-125 use the Yamaha Graded Hammer Standard or GHS.

This is a hammer action meant to replicate the subtle weight differences between the piano keys. So, the lower keys on the piano will be slightly heavier than the lighter keys, which is why both pianos do a great job of replicating the weight of an acoustic piano.

But since the YDP-164 is a console digital piano, it inherently feels a bit more realistic than the P-125. And I’ll get to the exact reason why in the next section.

The main reason I found that the YDP-164 felt more realistic than the P-125 was because of the key texture. The P-125 comes with glossy plastic keys, which you would expect in this price range. And while this isn’t necessarily a bad thing, I noticed that the keys had a plastic feel which took away a lot of the realism.

The YDP-164, even if it also uses plastic keys, has a subtle coating on the keys. These give the keys on the YDP-164 a matte finish and texture. This feels closer to the real wooden keys you’ll find on acoustic pianos and is the reason the YDP-164 felt way more realistic compared to the P-125.

You’d expect a console digital piano to have a richer tone than a portable digital piano. And while the speakers and design of the Yamaha YDP-164 produce a very wide and realistic tone, I found that the P-125 actually has a better sound and a wider sound library.

So, despite the price difference, the Yamaha P-125 actually came out on top when I compared it to the YDP-164’s tone.

To find which piano had the better tone engine, I decided to do a sound test. And when I plugged the pianos into the same set of speakers, I could barely tell the difference between the piano sounds. Both pianos were able to produce very rich and bright tones, which you would expect from a Yamaha digital piano.

That said, the Yamaha YDP-164 had a slight advantage when using the built-in speakers. This is because the speakers on the YDP-164 are placed in a way that replicates how sound travels through the air with an acoustic piano.

However, considering that the price difference between the two is almost a thousand dollars, I don’t think that YDP-164’s tone is that much better to justify the price. So, when it comes to value for the money, the P-125 actually offers more in terms of tone than the YDP-164.

Console digital pianos are designed to replicate the sound and feel of an acoustic piano. So, don’t expect the YDP-164 to come with the most varied set of tones.

The YDP-164 comes with ten different voices. For a console digital piano, this is actually a lot. This piano allows you to choose between various piano, electric piano, bass, and string tones. You won’t find this much variation with other digital console pianos in its price range, but it definitely pales in comparison to the P-125.

Even if it’s the more affordable model, the P-125 comes with 24 different voices. While they fall under the same categories, the P-125 offers more choices for each type of voice. That way, you can easily find a preset that fits the music you playing and your own style.

The next comparison point I had with these two pianos was the piano features. This includes the extra playing modes, polyphony, and built-in effects. And since the P-125 is designed to be used in gigs, practice, and jam sessions, you can expect it to have more features.

This was ultimately the reason I chose the P-125 as the winner and why you might find it to be the better option as well. So, here’s a quick rundown of the different piano features you’ll find on either piano.

Let’s start by talking about the playing modes. The only additional mode you have with the YDP-164 is duo mode, which is designed for piano lessons and duets. With this mode, you can divide the keyboard into two smaller pianos with the same pitch and voice.

That way, the teacher can play along with the student without worrying about pitch differences. And while this is a very useful playing mode for teachers, it would’ve been nice to see other playing modes on this piano.

The P-125 comes with split and dual modes on top of the duo mode. With split mode, you can assign one voice to one half of the piano and another voice to the other side. For example, you can have a bass voice on the lower notes and a piano voice on the higher notes so you can fill in more sonic space.

With dual mode, you can blend two voices together. That way, it’s like you’re playing two instruments at the same time.

Both of these modes are great for live settings and for jamming with friends. Because of this, I believe that you’ll find more uses for the P-125 compared to the YDP-164.

Polyphony refers to the number of sounds a piano can play at a time. In the past, this was a major consideration as we didn’t have as much computing power before, so it was hard to find a piano that had a high maximum polyphony.

Nowadays, things are different. Since we have more powerful computers now, it’s easier to find a piano with a high maximum polyphony. Both the YDP-164 and the P-125 have 192-note maximum polyphony, so you won’t have to worry about playing chords with many notes when playing either piano.

The last set of piano features I compared were the built-in effects. And to my surprise, the Yamaha P-125 had a wider effect set that gives you more control over the tone.

The P-125 comes with reverb, IAC, damper resonance, and a sound boost. Granted, most of these effects make small differences, but they give you significantly more control over your tone than other digital pianos.

The YDP-164, on the other hand, only has one effect: reverb. This is probably the most useful effect for beginners and experienced pianists. However, if you’re looking for maximum control over your tone, the P-125 might be the better option for you.

These are two very different pianos, which is why I had a great time comparing them. Almost every feature between the two was different, from the tone engine down to the sound library and effects. However, that doesn’t mean that you can’t find any similarities between the two.

To start, both pianos come from Yamaha, one of the most trusted digital piano brands on the market. So, you won’t have to worry about either piano being low-quality. In fact, I would gladly recommend either piano to any pianist looking for a reliable instrument.

On top of that, both pianos have 192-note maximum polyphony. This means you won’t have any trouble playing many notes at the same time. This is fairly common nowadays as computers have become much stronger and more accessible.

That said, while both pianos are great, I still prefer the P-125. It comes at a lower price, has high-quality tones, a wider sound library, and is the more versatile option overall. The YDP-164 is best for home use, but if you need a piano you can bring to gigs, practice, and lessons, the P-125 is the easy pick.

Quick Rundown of the Yamaha YDP 164