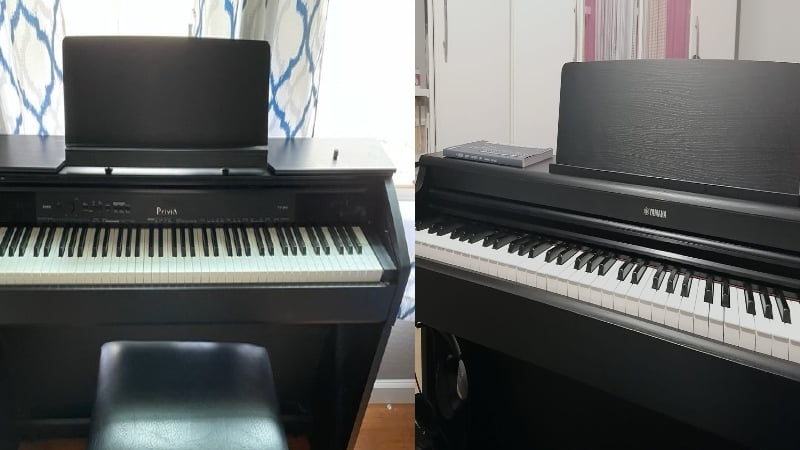 Can the Casio PX-870 hold up against a piano twice its price? Find out in this Casio PX-870 vs Yamaha YDP-164 review!

When I first thought of making this Casio PX-870 vs Yamaha YDP-164 comparison, I assumed that the Casio model wouldn’t stand a chance. But after a rigorous and in-depth review, I learned my assumptions were wrong.

Despite the price disparity, I found that the Casio PX-870 actually beat out the Yamaha YDP-164. Don’t get me wrong, as the more expensive model, the Yamaha YDP-164 offered a range of premium features you’ll only get if you pay that much for a piano.

However, in almost every aspect, the Casio PX-870 was able to match or even exceed the Yamaha YDP-164. Because of this, I determined that the Casio PX-870 offered more value for the money, especially for beginners.

If you’re an experienced pianist, then the extra details and features you get from the Yamaha YDP-164 are well-worth the investment. But if you’re a beginner or novice piano student, you might find that the Casio PX-870 is the better option as it’s more affordable and offers almost the same functionality as the YDP-164, with a bit more versatility!

To determine the winner between the two pianos, I compared each of the features head to head. And for the most part, these two pianos were tied, which came as a surprise considering how much more expensive the YDP-164 is compared to the Casio.

At the end of this comparison, the score was 3-2 in favor of the Casio PX-870. This is because while the Yamaha had better tone quality, the Casio offers more playing modes and effects, which gives you the versatility you need from a beginner piano.

When comparing the tones of these two pianos, I chose to focus on two specific areas: the tone generator and the sound library. And even if I found that the voices on the Yamaha YDP-164 were of higher quality and more realistic, I decided to declare this category a tie because the Casio PX-870 offers more voices, which gives you more versatility.

In terms of tone generation, it’s hard to beat the Yamaha CFX Sampling method. Since Yamaha produces its own line of grand pianos, the CFX Concert Grand Piano collection (one of the most popular in the world), they were able to collect top-quality samples that you trigger whenever you press on a key.

The result is a rich and bright tone that is well-worth the price point. While the Casio PX-870 uses the AiR Sound Source, which is pretty good at producing a very well-rounded set of tones, it simply couldn’t compare to the Yamaha CFX tone engine’s quality.

So, if you’re looking for tone quality over tone quantity, you might want to consider investing in the Yamaha YDP-164 over the Casio PX-870.

Now, even if the Yamaha had better sound quality, it wasn’t that far ahead of the PX-870. In fact, the Yamaha’s tone was definitely more realistic, but if you’re a beginner, you might have a hard time noticing the difference between the Casio and Yamaha’s tone.

So, the reason I declared these two tied in terms of tone is that the Casio PX-870 has a more varied sound library. When shopping for digital pianos, customers shouldn’t expect that many tones. And since the Casio PX-870 comes with 19 different voices compared to the Yamaha YDP-164’s 10 voices, it offered a bit more versatility for pianists.

Again, keep in mind that the quality of the tones on the Yamaha is still better than the Casio. But since pianists have more sonic choices with the Casio PX-870, these two are tied in terms of the tone.

Whenever you’re shopping for a digital piano, whether you’re a beginner or a performing pianist, you need to make sure that it has a good feel. The closer the digital piano feels to an acoustic piano, the better. And with these two models, I found that they both resembled an acoustic piano very well, which is why they are tied in terms of feel and playability.

The Casio PX-870 uses Casio’s Scaled Hammer Action System. On the flip side, the Yamaha YDP-164 uses the Yamaha Graded Hammer 3 System. Both of these hammer action systems are designed to replicate the slight weight differences on the lower and higher keys on an acoustic piano and both of them do it fairly well.

With that said, while I did notice that the Yamaha YDP-164 felt slightly better than the Casio PX-870 in terms of hammer action, the difference is very miniman. In fact, if you’re a beginner, there’s a high chance you won’t even notice the difference between these two pianos.

Both of these pianos excel in terms of key texture. But since the Casio PX-870 is the more budget-friendly model, I was actually surprised to find out that it had coated keys. Usually, when you shop for digital pianos in the sub-$1,000 range, you only get glossy plastic keys.

So, with the Yamaha YDP-164, I honestly expected the coated keys while the Casio PX-870’s coated keys were a pleasant surprise.

With that said, both of the pianos offered great key texture. When touching these keys, you will notice that they both feel very close to acoustic piano keys as the coating is designed to mimic the feel of ebony and ivory.

However, I would have really enjoyed the Yamaha YDP-164 more if it had wooden keys, considering its price. So, because the Casio PX-870 is more affordable, it actually holds a slight edge in this category.

As you probably noticed, at this point, both of these pianos are tied. And the tiebreaker in this comparison is the piano features. To my surprise, the Casio PX-870 offered a wider variety of playing modes and effects, which made it the more versatile option over the Yamaha YDP-164 and ultimately made it the winner in the end.

With the Casio PX-870 you have more options when it comes to playing modes. With split mode, you can assign different voices to either side of the piano, so it’s like playing two instruments at once.

With duo mode, the piano is divided into two mini pianos with the same timbre and tuning. This is designed for piano lessons and duets, which is why it’s also called “duet” mode. With layering mode, you can layer two different voices on top of each other for a uniquely rich tone.

Since the Yamaha YDP-164 is more expensive, I expected it to come with more playing modes. However, this isn’t the case, which just shows how much value for the money the Casio PX-870 offers.

The Yamaha YDP-164’s primary effect is reverb. While this is great for adding character to your tone, the Casio PX-870 comes with chorus and brilliance control. This gives you more versatility and allows you to customize your tone even further, which is why the Casio PX-870 won out in terms of piano features.

Keep in mind, effects aren’t exactly necessary for a good piano. However, they do allow the musician to customize their tone further and create a sound they can call their own.

As two digital console pianos, these models share some similarities. For example, they are both heavy, have a furniture stand, and are designed to stay in one place for a long time. This is why these pianos are ideal for people looking for a piano for the living room or for a venue like a church or concert hall.

With that said, the difference between these two pianos are minimal. They use different tone engines, hammer action systems, and even feature different effects and playing modes. These differences are the reason it’s a whole lot of fun to compare these two models.

And if you’re looking for more value for the money, the Casio PX-870 was my favorite pick. But if you’re in need of a premium digital piano and are ready to invest, then there’s nothing wrong with the YDP-164 either.

Quick Rundown of the Yamaha YDP-164