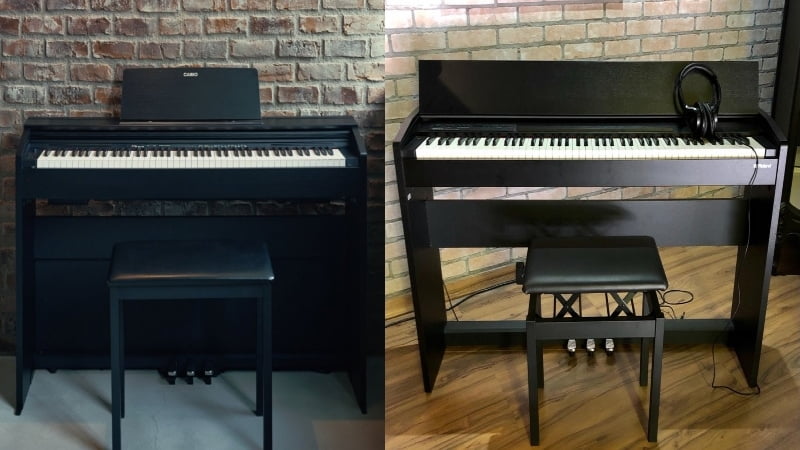 In this Casio PX-870 vs Roland F140R comparison, we’ll dive into all the features of both pianos and get into the details of why I found the Roland to be the better option.

Choosing the right digital console piano is hard. There are just so many things to consider that it’s easy to get overwhelmed, especially with how saturated today’s market is.

With that said, two very popular options for a lot of pianists today are the Casio PX-870 and the Roland F140R. Both models are relatively affordable and offer a range of features that you won’t find with other options in this price range.

But after conducting a thorough Casio PX-870 vs Roland F140R comparison, I found that the Roland model eventually won out with its more robust feature set.

Don’t get me wrong, the Casio PX-870 is still a great digital piano for anyone shopping in the sub-$1,2000 price range. However, if you’re looking for versatility and functionality, the Roland F140R might just be the better investment for you.

When figuring out which piano had more to offer, I figured that comparing the differences of both pianos was the way to go. And after a thorough comparison, I ended up with a score of 3-2, in favor of the Roland F140R.

The Roland F140R only won out in one area: the tone. For the rest of the comparison, I found that these two options were tied even if they ran on different systems. So, both pianos will serve you very well, it’s just that the Roland option offers better tone options, which is very important for pianists.

In terms of the tone generator and tone quality, I didn’t have any qualms with either piano. However, since the Roland F140R offered such a wide range of voices that give pianists a lot of versatility, I couldn’t help but give it the point.

Roland’s tones come from the SuperNATURAL Piano Sound. This is a system designed by Roland to get the most out of the samples on the piano. It still runs on sampling technology, which has shown itself to be the most cost-effective method for generating high-quality tones.

But compared to other models that use basic sampling methods for its tones, the Roland offers superior quality. With that said, keep in mind that this only applies to the piano voices on the instrument. So, you may be disappointed in the difference in quality between the piano voices and other tones on the Roland F140R.

On the flip side, the Casio PX-870 runs on the AiR Sound Source. This is a technology designed to allow soundwaves to travel through the air in the same way acoustic piano sound waves travel.

The PX-870 uses four-layer samples on all of its voices. So, you get a more well-rounded and high-quality set of voices all throughout the piano.

And when doing a sound test side-by-side of the PX-870 and the F140R, the difference was very minimal and almost non-existent, at least for the piano voices.

The reason the Roland F140R ended up the winner in this category is because of the sound library. This is because you get a whopping 316 different voices on the F140R, which is more than what any pianist, whether you’re a performer or beginner, would need.

So, alongside the electric and acoustic piano tones that use the SuperNATURAL Piano Sound, you get a range of voices such as organ, strings, bass, and even synth. While they won’t be as high-quality as the piano voices, it does allow for a lot of versatility.

The Casio PX-870 still comes with a lot of voices for a digital piano. However, the sound library of the Casio is significantly smaller than that of the Roland. It has 19 different voices, which covers all of the bases you need when learning the instrument, so I had no complaints with the versatility of the Casio PX-870.

However, at the end of the day, it simply couldn’t compete with the hundreds of different sounds available on the Roland FP140R.

Both of the pianos perfectly hit the mark in terms of feel. Since they are equipped with pretty sophisticated hammer action systems and even feature a coating on the plastic keys, you can rest assured that either of these models will provide you with a realistic feel similar to an acoustic piano.

Let’s start with hammer action. The Casio PX-870 uses the brand’s Scaled Hammer Action II system while the Roland F140R uses the PHA-4 system. While they are different systems, they function in a similar manner to achieve the same goal.

When you play an acoustic piano, the lower keys on the left side have a heavier weight to them than the keys on the right side. So, the Casio and Roland pianos aim to mimic that using their hammer action systems, which they do to a great extent.

With that said, you have more options for customizability on the Roland, since it has 5 different touch sensitivity settings compared to the Casio’s 3 settings. This isn’t a big difference, but it is still worth mentioning.

In terms of key texture, both of these pianos tried their best. While they both use plastic keys, they have a certain coating on them which gives off a more realistic texture.

On the Casio PX-870, both the black and white keys are coated. This is designed to simulate the texture of ebony and ivory keys, which results in a more realistic feel. Since the piano has plastic keys, this coating does a whole lot to make the piano feel more like an acoustic instrument.

The Roland F140R, on the other hand, still has a coating, but only on the white keys. Again, you don’t exactly need a coating on both the black and white keys if you’re a beginner, but it would have been nice for Roland to also put a coating on the black keys.

So, the Casio has a very slight edge in this regard. But keep in mind, the difference is very minimal and most beginners and novice pianists won’t even notice the difference.

Again, these two pianos were tied in this comparison. While they offer the same playing modes, I chose to focus on the main differences: the effects and polyphony. Both models have their own strengths and weaknesses in this regard, which is why they split the points in this category.

The reason is that the Casio PX-870 needs that extra polyphony to function properly. Since it plays multi-layered samples, it needs more computing power for you to be able to play wide and dense chords even with the sustain pedal on.

The Roland F140R doesn’t need that much polyphony since it only uses single samples. On top of that, computing power has gone so far in the past couple of decades that it’s now easy for manufacturers to add higher maximum polyphony on a digital piano without jacking up the cost, which you can clearly see on this Roland option.

Compared to the Roland, the Casio PX-870 actually has more effects. This gives you a bit more control over the sound of your instrument. However, if you’re a beginner, it might be best to stay focused on your lessons and not to mind the effects that much.

The Roland F140R only features ambience and brilliance effects. You can use these effects to make slight tweaks to your tone so you can really make it your own. If you’re a beginner, you might notice the difference that much, so you probably won’t be using these effects too often.

On the flip side, the Casio PX-870 shares the same ambience and brilliance effects, but it also comes with a chorus and reverb option. This allows you to add texture, room, body, and color to your tone while playing. This is a great feature in favor of the Casio PX-870, which is why it’s still worth your money despite not being as versatile as the Roland FP140R.

These two pianos don’t share too many similarities on top of the fact that they are two console digital pianos. But when doing the research, I did find that they actually shared the same playing modes.

With either model, you can try out the split, lesson, and layering modes which are all very useful. However, the Roland F140R has more versatility with these modes since it has more voices and allows more customization, even if the Casio PX-870 is right behind it.

In this comparison, the theme of the Roland F140R slightly beating out the Casio is common. This is because both pianos are great options for just about any musician out there. But since the Roland model offered a bit more versatility, I had to declare it the winner in thai comparison.

Quick Rundown of the Roland F140R