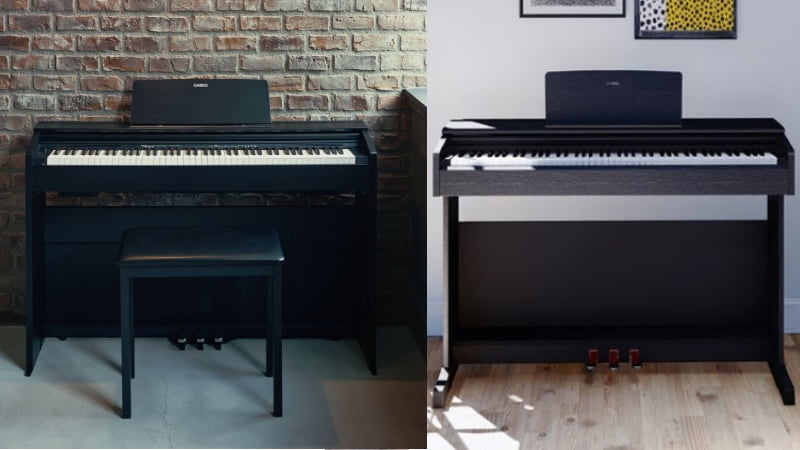 In this Casio PX-870 vs Yamaha YDP-144 comparison, we discuss some of the reasons why I found the PX-870 as the better choice between the two.

Digital pianos have gone a long way in the past couple of years. As computing technology has become more accessible, digital pianos are now more affordable and offer a wider range of features than models of the past.

And in this day and age, a popular debate between pianists is the Casio PX-870 vs Yamaha YDP-144 comparison.

Both of these pianos would be great options for any beginner or novice piano student. However, since the Casio PX-870 has a wider range of effects and voices, I found that it was the better option.

With that said, Yamaha’s app integration is almost unmatched in the industry, so if you like modern features like that, the Yamaha YDP-144 could be the option for you.

If you’re on the fence between these two pianos, you’ve come to the right place as we lay out all the details of these models so you can decide which one suits your needs better. 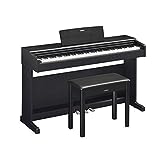 When I was testing out these pianos, I figured that the best way to choose a winner was to pick apart their differences in a head to head comparison. And after rigorous testing, the Casio PX-870 eventually won out with a score of 3-2.

As you can tell, the score was really close since these are both great options for any pianist looking for a reliable digital piano. But if you want to learn how the Casio PX-870 narrowly edged out the competition, keep reading.

There isn’t that much of a difference between the tone generators of these two pianos. While they have different names and function in different ways, they still provide very rich and realistic piano tones along with a range of more abstract voices like synth and strings.

I had no complaints with the sound quality on either piano, which is a testament to their tone engine. The Casio PX-870 uses the AiR Sound Source. This generator functions in the same way as most other digital pianos, wherein you trigger a sample whenever you press a key.

However, the difference is that the AiR Sound Source picks use 4-layers of samples for every note. That way, the sound hits you in a similar manner to an acoustic piano, which is why the tones of the Casio PX-870 sound very rich and bright.

The YDP-144 uses Yamaha CFX Sampling. Like the Casio model, this tone generator relies on high-quality samples to produce tones. However, what sets the Yamaha apart is that it’s equipped with top-quality samples from Yamaha’s own line of CF Concert Grand Pianos, which are some of the most popular options  for professional and concert pianists worldwide.

What sets the Casio PX-870 apart from the Yamaha is its sound library. With the PX-870, you get a whopping 19 tones. For a digital console piano, this is a whole lot, since the Yamaha only has 10 different voices.

With that said, you get around the same types of voices on the Casio and Yamaha. So, if you want to choose between organ, piano, strings, and synth tones, you get all of that with either option. However, the Casio PX-870 offers more choices in each category, which is why it ultimately won out.

I had no complaints with either of these pianos in terms of feel. They both feature a form of graded hammer action and some sort of coating on the keys to simulate the texture of an acoustic piano. And for that, I decided to declare it a tie between the two options.

The Yamaha YDP-144 uses the Graded Hammer Standard system that’s popular with many Yamaha models. The Casio PX-870 uses their own Scaled Hammer Action system and achieves around the same results as Yamaha.

With either piano, the lower keys will be a bit heavier than the higher keys, which is the same way an acoustic piano is laid out. And even if the pianos have different hammer action systems inside, they both achieve the same type of hammer action.

And with adjustable touch response on both pianos, you can easily tweak the piano to the weight of your touch.

The Casio PX-870 has a slight advantage over the Yamaha YDP-144 in terms of key texture. This is because both the white and black keys are coated to simulate real ebony and ivory keys on acoustic pianos. And with the Yamaha, only the black keys have a matted texture.

So, both pianos offer a slight difference in the textures of the black and white keys, which makes a huge difference for experienced pianists. With that said, I could feel that the Yamaha’s white keys had a glossy and plastic finish, which didn’t exactly sit well with me. And while that’s a small issue, it’s still very much worth mentioning.

These two pianos share a lot of the same piano features such as extra inputs, MIDI connectivity, volume control, and even playing modes. However, we’re only going to be looking at the two differences in their piano features that make them unique. And since they both offer something unique, these pianos were also tied in this comparison.

The Casio PX-870 has a wide range of effects, which is a huge point in its favor. With this piano, you have reverb, chorus, and brilliance effects. With reverb and chorus, you can add unique texture and character to your tone. And with brilliance, you can make slight adjustments so that the tone really suits your playing style.

On the Yamaha YDP-144, you only have one effect, which is reverb. Granted, reverb is arguably the most useful effect for any modern pianist. However, it still would have been nice for Yamah to feature a wider range of effects to give you more control over the tone of your piano.

Both the Casio and the Yamaha integrate with an app. On your smartphone, you can connect the app and control your piano. This is how to navigate between different playing modes, tweak your sounds, and access a wide range of other features.

However, Yamaha’s app has a slight advantage over Casio. While they offer the same type of features, I found the Yamaha app to be easier to navigate. On top of that, it gives you a lot of control over the piano, and in the age of smartphones, this is a great feature.

The Casio PX-870 and the Yamaha YDP-144 don’t have too many similarities. Afterall, they are made by different brands, come from different product lines, and offer unique characteristics. But with that said, there are still some similarities between these two pianos that are worth noting.

For example, they both have lesson and layer mode. This is great for piano students and performing musicians alike. Lesson mode allows you to split the piano into two mini keyboards which makes lessons and classes much easier.

And with layer mode, you can create your own unique tones to help you stand out and fill a unique sonic space.

Another obvious similarity is that these are both console digital pianos. So, these aren’t the best options for people looking to move around with their piano. But if you want a new home piano or to place a great-sounding model in a specific venue or classroom, either of these pianos will serve you very well.

But in the end, I chose to stick to the Casio PX-870 as it offered a bit more versatility than the Yamaha YDP-144.