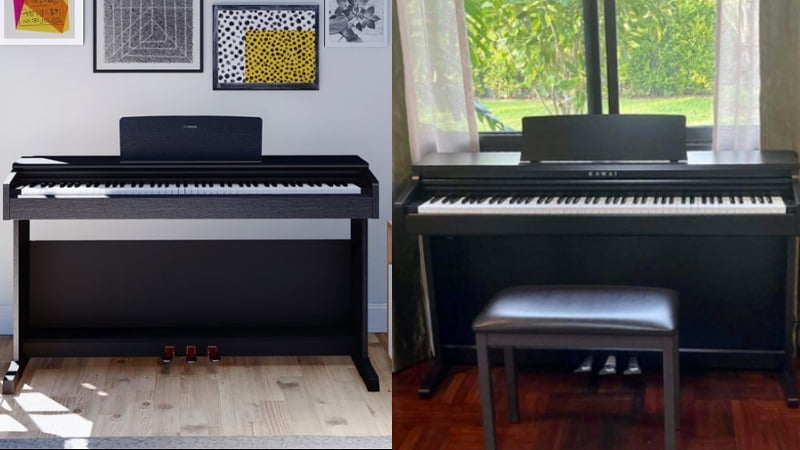 Two of the most similar product lines in the digital piano world today are Yamaha’s YDP and the Kawai KDP product line. Both the YDP and KDP contain a range of great console digital pianos that come with realistic tones and are available at a fair price.

But when shopping for one yourself, which one is the better pick?

Well, I’ve had the privilege of testing out both pianos. And I found that the Yamaha YDP-144 offers more value for the money, has more features, and is the better pick overall. It’s hard to compete with the Yamaha YDP collection, and this article will show you why.

While I prefer the YDP-144, there are many pianists who might find that the Kawai KDP-120 is better suited to their needs. So, in this Yamaha YDP-144 vs Kawai KDP-120 comparison, I’ll dive deep into the details of both pianos and lay out all of their features.

And once all is said and done, you’ll know exactly which piano is best for your needs!

When comparing digital pianos, it’s best to always consider their tone, feel, and extra piano features. While these aren’t the only aspects of a digital piano, these are by far the most important and ones that you cannot skip over.

And when I compared these pianos based on the aspects I mentioned above, the Yamaha YDP-144 won with a score of 3-1. The Kawai KDP-120 was right behind the Yamaha in almost all categories, but in the end, the YDP-144 won.

Below, I explain exactly how that happened.

The first comparison point we’ll look at is the tone. If you ask any pianist out there, they will probably tell you that the tone is a digital piano’s most important feature. And when shopping in the price range of the YDP-144 and KDP-120, you shouldn’t go for a model that doesn’t have a realistic piano tone.

And between these two instruments, the YDP-144 has a slight advantage. Even if the KDP-120 comes with more voices, the quality of the Yamaha’s voices is the best in this price range. So, the YDP-144 won the point for this category.

The Yamaha YDP-144’s tones come from the CFX sound engine. This is one of the newer Yamaha tone generators on the market, and it’s miles ahead of its counterparts. This is a direct upgrade of the PureCF Sound Engine, which was already known for producing realistic piano voices. But when I tried the piano sounds from the CFX sound engine, there was no arguing that the new version is much better.

Just like its predecessor, the CFX derives its samples directly from the Yamaha CF Grand Piano. Even if you haven’t seen one of these before, you’ve likely heard them as they are widely used in piano recordings worldwide.

On top of that, Yamaha used top-of-the-line equipment when recording the samples, which is why they retain so much detail. So, every time you press a key on this piano, you can expect a rich and vibrant tone that’s very close to the sound of the Yamaha CF Grand Pianos.

The Kawai KDP-120’s tone generator is also pretty good. While it isn’t as realistic or rich as the CFX, Kawai’s Harmonic Imaging system produces some fairly realistic tones. This tone engines aims to recreate the sound of Kawai’s own 9-foot grand piano. And while it does a fairly decent job, it’s not as good as the CFX.

So, if you’re particular about tone quality and need a digital piano that can closely recreate the sound of a real acoustic instrument, the Yamaha YDP-144 is the better option for you.

It’s important to note that these are digital console pianos. These are instruments that aren’t supposed to be portable. Instead, they are designed to recreate the sound, look, and feel of a real acoustic piano. So, you shouldn’t expect the pianos to come with the widest sound library.

For example, the Yamaha YDP-144 only comes with 10 voices and the Kawai KDP-120 only comes with 15. While this isn’t the largest sound library, it contains all the essentials if you’re a pianist. These pianos come with a selection of acoustic piano tones, an electric piano sound, as well as bass, organ, and strings voices.

Even if the Kawai KDP-120 gives you more voice options, I still gave the point to the YDP-144 because Yamaha simply produces higher-quality tones, so it gives you more bang for wyour buck.

And between the Yamaha YDP-144 and Kawai KDP-120, I couldn’t choose a winner. That’s why both pianos came out of this category with a point.

Both of these pianos come with great hammer action, which is why they both won a point. The Yamaha uses Graded Hammer Standard or GHS action while the KDP-120 uses Responsive Hammer Compact II action.

While they have different names, these actions aim to accomplish the same goal. When you try out these pianos for yourself, you’ll notice that the weight isn’t uniform. Instead, some keys are going to be heavier than others, which is how an acoustic piano is set up.

On top of that, both pianos come with textured keys. This offers even more realism while playing. If you’re an experienced pianist who plays acoustic pianos often, you’ll find that both of these pianos produce a similar feel.

And even if you can never perfectly recreate the way an acoustic piano feels with a digital instruments, both options definitely come close.

The last characteristic I looked at were the piano features. More specifically, I chose to look at the effects and playing modes. While these aren’t exactly necessary features, they increase the versatility and functionality of the piano, which is why I find them important nonetheless.

Between these two pianos, the YDP-144 is the clear winner. With a better effects set and more playing modes, the KDP-120 barely put up a fight.

Let’s start with the effects. Both of these pianos come with fairly decent reverb effects. This is used to create a sort of “echo” when you play the piano and adds a lot of depth and character to the tone. But between the two, the Yamaha’s reverb effects were a bit better and more realistic.

On top of that, the YDP-144 also comes with IAC and stereophonic optimizer effects. These aren’t exactly effects you’d use if you’re a beginner, but if you’re particular about the way your piano sounds, these are very useful.

Another reason the YDP-144 won this category is its playing modes. While both pianos come with dual and duo mode, only the Yamaha comes with split mode. Dual mode allows you to blend two voices together to create a unique tone while duo mode splits the piano into two mini-keyboards so you can play piano duets and go through piano lessons easier.

While these are very useful, it would have been great if the Kawai KDP-120 came with split mode, which is present on the YDP-144. This mode assigns a unique voice to either side of the piano, allowing you to seem like you’re playing two instruments at once.

The biggest similarity between these two pianos is the polyphony. Both of these models come with 192-note polyphony, meaning they can play up to 192 sounds simultaneously. Aside from allowing you to play dense chords, it makes notes ring out longer with the sustain pedal and also makes the dual mode a bit mre functional.

Additionally, these are both digital console pianos. So, they are designed to stay in one place. This is what makes these models perfect if you’re looking for a piano to use at home or to keep at a performance venue. While you can’t move them around freely, they make up for that with a superior look, sound, and feel.

Quick Rundown of the Kawai KDP-120