Learn the differences between these two pianos and which one is the better option in this Yamaha YDP-144 vs YDP-S54 review.

The YDP-144 and YDP-S54 are great Yamaha digital pianos. And at first glance, they might even seem identical.

But what’s the difference between these pianos, and which one is better?

Well, the main difference between these pianos is the fact that the YDP-S54 comes with GH3 action. This is a premium hammer action system that’s reserved for some of Yamaha’s best pianos, and it’s the only reason I think the YDP-S54 is better than the YDP-144.

In fact, if it weren’t for the hammer action system, I would say these two pianos are tied as they share a lot of primary features. And if you’re looking to figure out the best pick for your needs, you’ve come to the right place.

Today, I’m conducting an in-depth Yamaha YDP-144 vs YDP-S54 comparison, where I talk about all the main features and differences between these two pianos. So, by the end, you’ll knwo exactly which one to buy for your home, studio, or performance venue! 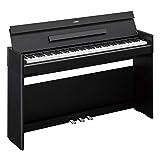 There are three qualities I believe are the most important considerations when buying a digital piano. This is the piano’s tone, feel, and polyphony. While these aren’t the only features of the piano, it does give you a good idea of the piano’s functions and capabilities.

But since the YDP-S54 had better hammer action and a more realistic key texture, it edged out a narrow win. Keep reading to learn the details of this digital piano comparison.

Whenever you buy a digital piano, the first feature you should check out is the tone. At the end of the day, the most important feature of a digital piano is how it sounds. And between the YDP-144 and YDP-S54, there was no clear winner.

This is because these pianos share the same tone generator and tone library. Luckily, these pianos use one of Yamaha’s best tone engines and come with all the voices you need from a digital piano. So, both of these pianos came out of this category with a point.

My favorite feature of these pianos is that they come with Yamaha’s CFX sound engine. This is one of the newest options from Yamaha, and it’s considered an improved version of the Pure CF Sound Engine.

Like its predecessor, the CFX sound engine is built around samples of Yamaha CF Grand Pianos. This engine produces exquisite piano tones that are really bright and modern. And in my experience, this is about the closest you can get to an acoustic piano sound in this price range.

The best part about this tone engine is that all the sounds are built around real instruments. This is what gives the YDP-S54 and YDP-144 realistic character that is instantly recognizable. So, if you’re particular about how a piano sounds, rest assured that the YDP-144 and YDP-S54 offer some of the best tones in their price range.

You don’t get the largest or most versatile sound library with these pianos. Since the YDP-S54 and YDP-144 are part of the Arius series of digital console pianos, you shouldn’t expect a large tone set. Instead, you’ll find a smaller sound library comprised of very high-quality tones that are very realistic.

Both of these pianos come with 10 voices. This isn’t a lot, but it covers all the basic voices you might need as a pianist. For example, you have a selection of piano voices, from grand piano to electric piano sounds. On top of that, you can use strings, organ, and harpsichord voices which allow you to play many musical styles.

Again, you don’t get the widest range of voices with either piano, but you do get all the essentials, allowing you to play classical music, jazz, pop, and any other genre you can imagine. And since these pianos are built to stay in one place anyway, you don’t necessarily need all the different voices on an arranger piano or digital keyboard.

Another important aspect for me when I was conducting this comparison was the way the piano felt. And this was the major difference between the YDP-S54 and the YDP-144. The YDP S54 has a superior hammer action system and more realistic key texture. This is what puts it one step above the YDP-114 and the reason it won the entire comparison.

That said, the YDP-S54 is a bit more expensive, and that’s because it comes with GH3, the next step above GHS in Yamaha’s hammer action tier.

The major difference between GH3 and GHS is that GH3 keys offer better and more realistic spring back. This means that the keys will bounce back a bit smoother and faster, akin to how the keys bounce on a premium acoustic piano.

On top of that, the GH3 keys have a synthetic ebony and ivory coating. This means that the piano keys really resemble the way an acoustic piano feels. If you’re looking for a digital piano that looks, feels, and sounds like an acoustic piano, the YDP-S54 is a great option.

The YDP-144 only comes with a basic matte coating on the black keys. This gives you a slight textural difference between the white and black keys, but it’s far from as realistic as what you get when you play the YDP-S54.

I’m serious when I say that the only difference between the YDP-144 and the YDP-S54 is the hammer action. Every other aspect of these pianos is the same, including the polyphony.

Both of these pianos come with 192-note polyphony. This is about as good as it gets in this price range. With this high polyphony, you can play just about any piece on the piano. Pianos with high polyphony like this allow you to play much more expressively and have notes ring out for much longer.

On top of that, the high polyphony allows you to utilize the dual and split modes of these pianos fully. Since these pianos have high polyphony, you can blend different voices and tones together, and rest assured that the piano can handle all these simultaneous notes.

Aside from the hammer action system, these pianos are identical. Granted, the YDP-S54 has a flipping key cover, while the YDP-144 has a sliding key cover. But when you look at the details of the piano and how they work, they are basically the same.

For example, these pianos share the same tone library and tone engine. That’s why if you’re doing a blind ear test, it can be hard to hear the difference between the YDP-144 and the YDP-S54.

On top of that, these pianos come with the same playing modes and polyphony. This allows you to use the piano for duets, experiment with different sounds, and even playing two instruments at once. While they don’t offer the widest set of tones and functions, they offer all that you need from a console digital piano.

Quick Rundown of the Yamaha YDP-S54