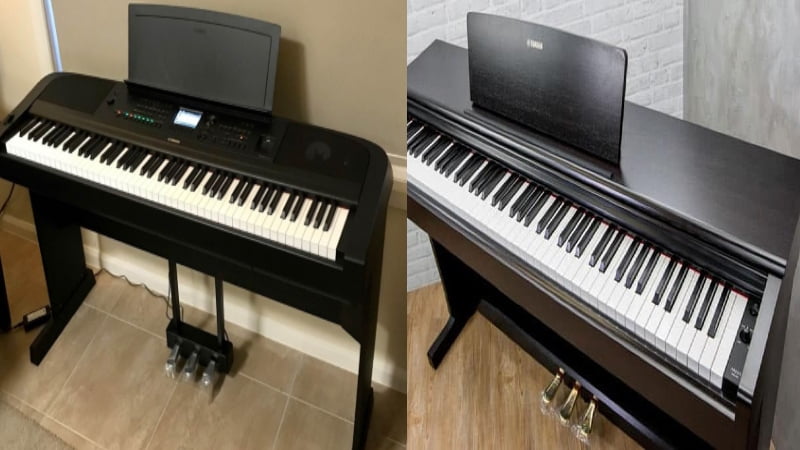 Finding a digital piano is hard, but this Yamaha DGX-670 vs YDP 144 comparison is a great way for you to narrow down your options.

There are many digital pianos available nowadays. And two particular models that caught my eye were the Yamaha DGX-670 and the YDP-144. At first glance, it’s easy to assume that the YDP-144 wins out since it’s the more expensive model.

When testing these two models, I found the Yamaha YDP-144 to be worth its price. However, the Yamaha DGX-670 was significantly more flexible and versatile. And at the end, this made it the better pick for most pianists.

In this comparison, I’ll dive into the details of both pianos. That way, you can easily figure out which one is the better fit for your needs! 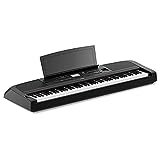 Whenever I compare two digital pianos, I always look at three comparison points: feel, tone, and piano features. These are the most important aspects of any digital piano and are the things you should pay the closest attention to. And in this comparison, The Yamaha DGX-670 won with a score of 3-1. While these two pianos share many features, the Yamaha DGX-670 is much more flexible, which is why it ended up winning this comparison.

While these pianos share the same hammer action system, the Yamaha DGX-670 has a slight texture on the keys, which makes a subtle but important difference. So, both pianos can offer you realistic weight and resistance when playing, but the Yamaha DGX-670 does a much better job of replicating the texture of a real acoustic piano.

Before we dive into the key texture, I want to talk about the hammer action system. Both pianos utilize Yamaha’s Graded Hammer Standard. This is the first tier of Yamaha’s graded hammer action systems, but it performs much better than many other options in the price range.

This is because the system is designed to replicate the small weight differences that you get with an acoustic piano. This is much more realistic than many other weighted keyboards in this price range, which is why I loved seeing this feature.

That said, since the Yamaha YDP-144 is more expensive, it would have been more fitting to see the GH3, which makes the keys bounce back a bit faster, like a high-quality acoustic piano.

I loved the piano action systems on both pianos. However, I was greatly disappointed by the key texture on the Yamaha YDP-144. While I didn’t expect fully textured keys, seeing glossy plastic keys on this piano was a huge disappointment.

While the DGX-670 also features plastic keys, at least the black keys have a satin finish, which provides some sort of textural difference.

So, while it was a fairly close battle, the Yamaha DGX-670 eventually edged out the win due to its slightly more realistic key texture.

If you’re looking for high-quality and realistic piano tones, both instruments will serve you well. Since they utilize the same tone generator, they provide the same tonal quality. However, keep in mind that the Yamaha DGX-670 comes with many more tones, which is why it won when comparing this specific feature.

The reason the Yamaha DGX-670 came out on top in this comparison was the sound library. Since the YDP-144 is solely a portable digital piano, it doesn’t come with a wide range of piano tones. In fact, this instrument only comes with 10 voices. And even if these are the essential voices that any pianist would find useful, it’s far from varied.

On the flip side, the Yamaha DGX-670 features over 600 different voices. Of course, this means that it has all the essentials like piano, electric piano, organ, strings, and bass while also featuring unique sound effects, drum kits, and synthesizers.

But while I loved the variety on the Yamaha DGX-670, some of the tones weren’t the best quality. This is because not all of the tones come from the CFX sound engine. But when you compare this tone library to the one on the YDP-144, the DGX-670 is the clear winner.

The last comparison point between these two was the piano features. And in this category, I couldn’t choose a winner. This is because both pianos come with a similar maximum polyphony and set of effects. So, this is how the YDP-144 managed to edge out one point in this comparison.

Polyphony refers to the piano’s ability to play multiple notes at the same time. So, the Yamaha DGX-670 and the YDP-144 can play 256 and 192 simultaneous notes, respectively. This is great as you can be very expressive and add emotion to your playing through the sustain pedal and various playing modes without affecting the tonal quality.

These pianos come with their own effects sets. The DGX-670 features Reverb, Chorus, DSP, IAC, and Part EQ, while the YDP-144 comes with Reverb (4 types), IAC, Stereophonic Optimizer, and String and Damper Resonance. So, each piano has its own advantages when it comes to the effects you have.

The effects on the DGX-670 are geared more towards pianists playing various musical styles. Since this is an arranger piano, you need this versatility. The YDP-144, on the other hand, features effects that would be great for traditional pianists looking to emulate teh character of an acoustic piano.

So, at the end, the best effects set for you largely depend on your playing style. This is why it’s important to choose digital pianos based on the way you play piano and make sure it has all the features you need for your playing.

These pianos come from the same brand, so you can expect a few similarities. To start, they feature the same hammer action system. While it would have been nice to see a more premium setup on the more expensive YDP-144, the GHS system is perfectly fine.

On top of that, these pianos both use the CFX sound engine for their piano tones. This is why the pianos have very bright and realistic piano sounds that are very similar to the ones you might hear on Yamaha CF Grand Pianos.

That said, these pianos are definitely designed for different users. The DGX-670 is the more flexible option. So, I would choose this if you want to play many musical genres and you want to experiment with different sounds.

But if you’re fine with the essential digital piano tones and play a more traditional style of music, the YDP-144 might actually fit your needs better.

Quick Rundown of the Yamaha DGX-670

Quick Rundown of the Yamaha YDP 144