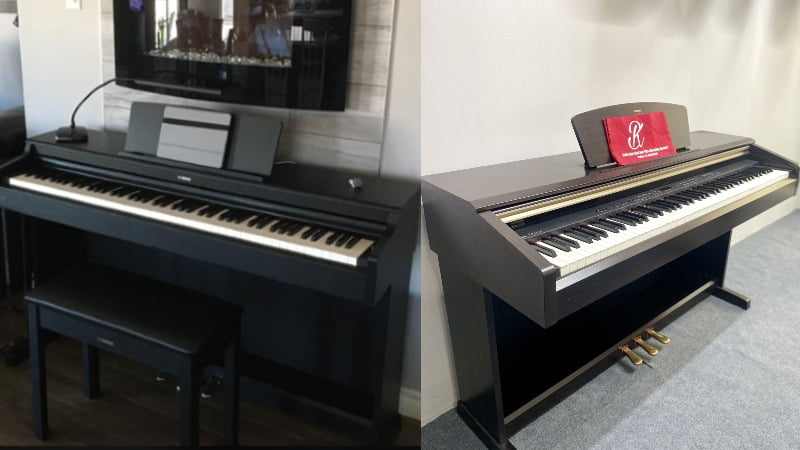 When it originally launched, the Yamaha Arius series took the world by storm. But as you’re about to see, the newer Yamaha Arius models are miles ahead of the first set of console pianos Yamaha released.

A great example of this is my Yamaha YDP-144 vs YDP-181 comparison, which I’ll detail a bit more below.

The YDP-144 comes with better hammer action, polyphony, and tones. So, if you’re trying to find the best Yamaha Arius piano for you, the YDP-144 will serve you much better than the YDP-181.

Below, I’ll get into all the details of this comparison and explain what makes the YDP-144 different from the YDP-181. And by the end, you’ll be able to see which piano is best suited to your needs!

I compared these two pianos based on the three most important qualities of any digital piano: the tone, feel, and polyphony. I’ve found in my experience that these are the characteristics that really make a digital piano, and they are arguably the three aspects you need to consider the most when buying one for yourself.

In this comparison, the Yamaha YDP-144 won the point for every category. At the end of the comparison, the score was 3-0 in favor of the YDP-144, which shows how much Yamaha has improved in recent years and why you should consider always going for the more updated model when shopping for digital pianos.

In the sections below, I’ll detail exactly how the Yamaha YDP-144 won all the comparison points so you can see why it’s the better piano.

The first characteristic I focused on was the tone. Your top priority when buying a digital piano should be finding a model with realistic and high-quality piano tones. And between the YDP-144 and the YDP-181, the winner was clear.

The Yamaha YDP-181 uses the tone generator that was considered the best available option upon its release. This is Yamaha’s AWM Stereo Sampling method that shook the world when it launched. Unlike other sample-based tone engines of the time, AWM uses stereo samples that contain much more data and produce more detailed voices.

This is why the YDP-181 was by far the most realistic-sounding digital piano when it was launched. However, a lot of time has passed since then, which has allowed Yamaha to develop even higher-quality tone generators.

That’s why you can find the Yamaha CFX, one of the brand’s most advanced tone engines, on the YDP-144. This tone engine derives all its piano sounds from Yamaha CF Grand Pianos and you can rest assured that Yamaha also used some of the best equipment available to capture the sound.

So, whenever you press a key on the YDP-144, you will hear a crisp, detailed, and realistic piano tone. While the YDP-181 produces some decent tones, it doesn’t compare with the detail in the YDP-144, which is why I gave the YDP-144 a point for this category.

One thing you need to know about digital console pianos like the YDP-144 and the YDP-181 is that they aren’t designed to play many sounds. Instead, they are made to replicate the sound of a real acoustic piano as best as possible, so they don’t come with the most varied sound libraries.

The YDP-144 and the YDP-181 only come with 10 and 14 voices, respectively. The YDP-144 has fewer voices than the 181, but both models allow you to choose between a few piano voices, organ, electric piano, and string sounds.

This is all you will need as a beginner and novice pianist. In fact, even professional musicians will be more than happy to have these options. However, the 14 voices on the YDP-181 sound fairly digital and dated, while the 10 voices on the YDP-144 are some of the highest-quality and most detailed digital piano voices you will find.

The next feature I looked at was the feel. And even if the Yamaha YDP-181 has decent hammer action, the technology is dated and doesn’t feel as realistic as modern options. On the other hand, the YDP-144 comes with some of the best hammer action available in this price range.

So, it was pretty clear that the YDP-144 deserved the point for this category.

It’s imperative that you closely analyze the hammer action of your digital piano. This is the main factor determining how realistic the piano feels and whether it can come close to a real acoustic piano.

The Graded Hammer Standard offers a more realistic weight and spring back while still capturing the subtle differences between the lower keys and higher keys. When I tested out both pianos, there was no doubt that the Yamaha YDP-144 felt way more realistic, so I had no choice but to award it another point.

The last feature I considered was polyphony. And between these two pianos, the Yamaha YDP-144 comes out on top yet again.

The Yamaha YDP-181 comes with 128-note polyphony. Back then, this was considered top-tier. But nowadays, the 128-note polyphony is seen as the standard for most digital pianos. While you can play almost any piano piece written with this polyphony, you are limited whenever you try to leave the sustain pedal on or play dense chords.

On the flip side, the Yamaha YDP-144 features 192-note polyphony. This is a great and very important feature as it gives you more flexibility when playing. With 192-note polyphony, you can be expressive by playing with the sustain pedal, mixing different voices together, and opening up way more opportunities with your digital piano.

There are quite a few similarities between the YDP-144 and YDP-181. After all, these pianos come from the same product line. For example, these are two console digital pianos designed to provide players with the most realistic experience possible.

These pianos are great options for those that are looking for a home piano or something to keep at their performance venue. While they are bulky, you get a bit more realism and a higher-quality sound, making them worth the investment.

Additionally, these pianos have a fairly limited selection of sounds. This is definitely on purpose, as the limited sound library allowed the brand to install better samples in the pianos, which is why they can both offer very realistic and crisp piano tones.

Quick Rundown of the Yamaha YDP-181