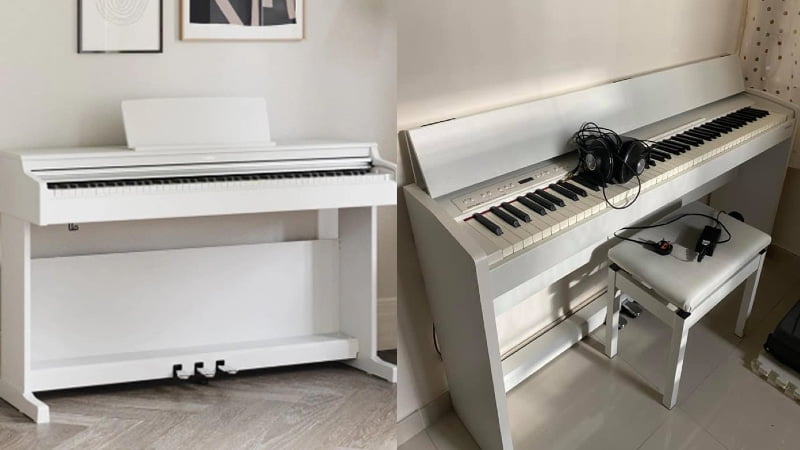 Looking for a console digital piano? Find out the best one for your needs in this Yamaha YDP-144 vs Roland F-140R review!

These two console digital pianos caught my eye because they offer amazing piano tones, a realistic feel, and great value for the money. If you’re looking for a digital piano to use at home or to keep at a performance venue, either of these pianos would be a good pick.

But which one is the better piano?

Well, that depends on your needs and preferences. After testing out both pianos, I leaned more toward the YDP-144 because it has better polyphony, allowing you to play more expressively. On top of that, Yamaha’s digital piano voices are hard to beat, so even if it was a pretty tight comparison, the Yamaha YDP-144 still came out on top.

That said, there are many more details that you need to know about these two pianos. And below, we’ll get into all of them so you’ll have an easier time finding the best one for your needs!

To truly find a winner between these two pianos, I compared them based on their tone, feel, and polyphony. Whenever you compare digital pianos, it’s important to look at these qualities as they are some of the most important characteristics of a digital piano.

And based on these three comparison points, the YDP-144 won with a score of 3-2. As you can tell, this was a really tight comparison, as both of these pianos do a great job and offer many features. So, let’s dive into the features of both pianos so you can start deciding which one you should get for yourself.

Each piano has its drawbacks and advantages regarding tone. The YDP-144 was the clear winner when it came to tone quality, as it has a much more advanced tone engine. On the flip side, the Roland F-140R has a much wider sound library, making it the more flexible option.

So, at the end of the day, I couldn’t pick a winner when comparing the tone of both pianos. Instead, I gave both pianos a point each for this category.

The Roland F-140R uses Roland’s SuperNatural Piano Sound. This is a decent tone engine that produces good piano tones that sound very crisp and realistic. However, when I did the ear test, I noticed that there was a slight digital quality to the tone.

On the other hand, the YDP-144 does a much better job at tone generation as it uses the Yamaha CFX tone generator. This is one of the brand’s newest innovations, and it’s the tone engine you’ll find on most of the high-quality Yamaha pianos.

The CFX tone engine services its samples directly from Yamaha CF Grand Pianos. These samples were recorded using the best equipment and the most advanced techniques, so whenever you press a key on the YDP-144, you can expect very rich and detailed piano tones.

On top of that, you get various piano sound options. There’s a traditional grand piano, bright piano, and many other tones available. So, if you’re particular about the sound quality of your piano, you might be better off going for the Yamaha YDP-144.

While the YDP-144 produces some of the best piano tones available, you don’t have that many options. This piano only has 10 voices which include three piano tones and a selection of strings, organ, electric piano, harpsichord, and vibraphone voices. While these are all the basic voices you need as a pianist, it’s still fairly limited.

This is especially true when you compare the YDP-144s tone library to the Roland F-140R. To start, the Roland comes with 11 different piano voices. But it doesn’t end there. Aside from the great piano tones on the Roland, you also have 305 other voices, such as guitar, harpsichord, organ, and even drums!

So, if you need a varied sound library to experiment with different tones at home, the Roland F-140R is the best option for you.

One of the best things about both of these pianos is that they have a very realistic feel. While the keys aren’t perfect, they have great action, which makes it feel much closer to an acoustic piano than other digital options on the market. So, I had to give a point to both pianos again for this category.

Most of the time, you have to deal with pianos that either have no weight on the keys or a uniform weight on the keys. While this isn’t too bad, it takes away a lot of the realism that you need when playing a digital instrument. This is why I really appreciated the fact that both of these pianos come with a graded hammer action.

The Yamaha comes with the Graded Hammer Standard, while the Roland comes with the Progressive Hammer Action-4. So, regardless of which of these pianos you choose, you can expect a slightly heavier weight on the bass keys compared to the treble keys.

This is the same way a regular acoustic hammer action system feels, which is a huge plus for both models. My only complaint is that even if the brands tried to add a coating on the plastic keys to make them feel more like wooden keys, they still feel like plastic.

But if you’re okay with a slightly plastic key texture, these pianos have a really good weight to them, which makes it feel like you’re playing an acoustic piano.

The last quality I looked at was the polyphony of the pianos. This feature is often overlooked, but it’s a very important consideration when buying a digital piano.

The Roland F-140R has 128-note polyphony. This is the standard polyphony in this price range, and it allows you to play dense chords and keep the sustain pedal engaged for long passages without worrying about notes dying out or losing clarity. And for most beginners and novices, 128-note polyphony is more than enough.

That said, the YDP-144 is a step above the Roland F-140R primarily because it has 192-note polyphony. This makes it a much more flexible and versatile piano that offers a bit more value for the money.

This is the only feature that the Roland F-140R couldn’t compete with. Aside from the polyphony, these pianos are tied in almost every category, but since the Yamaha YDP-144 has better polyphony, it wins the entire comparison.

These pianos come from different brands, so they don’t share many similarities. They have different tone engines, hammer actions, effects, and even sound libraries. And these differences are honestly what made it, so fun to compare these pianos.

Additionally, both pianos offer a lot of value for the money. You can pick either option and expect high-quality sounds and a realistic feel. However, if you want a little bit more versatility, then you’d be better off with the YDP-144.

Quick Rundown of the Roland F-140R