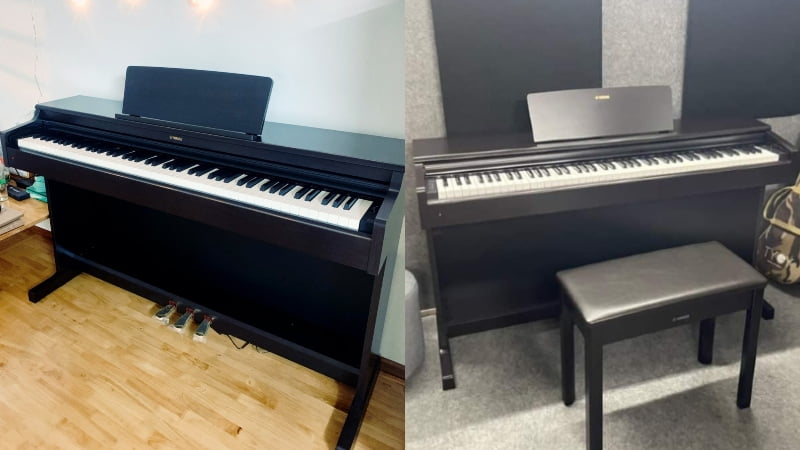 The Yamaha YDP-184 is the most expensive option in the Arius collection. And in this Yamaha YDP-144 vs 184 comparisons, learn how it stacks up compared to the cheaper models in this product line!

The Yamaha YDP-144 is my favorite Arius model available. While it isn’t exactly an affordable piano, it comes with a wide range of features and great value for the money. But if there were one piano in the Arius collection, I would rank higher than the YDP-144; it’s the YDP-184.

In this YDP-144 vs 184 comparisons, we’ll dive into all the details and features of both pianos. Additionally, I clearly laid out why the YDP-184 is the better option and why it’s worth the extra investment.

To cut it short, the Yamaha YDP-184 comes with more voices, polyphony, and better hammer action than the YDP-144. This isn’t that much of a surprise, considering the YDP-184 is the top model in the Arius collection and one of the best digital pianos the brand has to offer.

That said, there are still many pianists that might prefer the YDP-144 because of the value it offers for the money. So, keep reading this review to learn the ins and outs of both pianos and have an easier time deciding which piano is best for your needs.

To keep this comparison objective, I chose three main qualities to look at. This is why I compared these pianos based on their tones, feel, and polyphony. And unsurprisingly, the more expensive YDP-184 won all of these comparison points, so the final score was 3-0 in favor of the YDP-184.

But as you’ll see below, it was a pretty close fight for every single point. This is a testament to how well the YDP-144 performs against pianos that are more expensive and shows why this piano offers some of the best value for the money in the market right now.

The first aspect I looked at was the tone of these pianos. When buying a digital piano, the tone is arguably the most important consideration, as it dictates how the piano sounds and the different voices you can choose from.

Regarding tone quality, these pianos were tied because they use the same tone engine. However, the Yamaha YDP-184 has more voices than the YDP-144, making it more flexible and giving it a point for this category.

If you’re looking for a digital piano with top-tier and realistic piano tones, both of these models will serve you well. This is because they both use one of the most advanced Yamaha tone engines available: the Yamaha CFX.

This is the immediate upgrade to the Pure CF Sound Engine, which was famous for deriving its piano tones directly from Yamaha CF Grand Pianos. The CFX engine does the same thing, but Yamaha used even better technology to capture the samples and produce a realistic-sounding piano tone.

When I tested out these pianos myself, I was blown away by the realism in the piano tones. Of course, you won’t be able to find a digital piano that perfectly recreates the sound of an acoustic piano, but the YDP-144 and YDP-184 definitely come close.

These pianos captured the same brightness and clarity that make Yamaha CF Grand Pianos some of the most popular options on the market. So, when comparing tone quality, I couldn’t pick a winner between these two pianos.

However, as you’ll see in the next section, the Yamaha YDP-184 ended up with a point for this category because it comes with a much better sound library.

While these pianos sounded the same, the Yamaha YDP-184 has more voices. One of the most important and significant benefits of buying the more expensive YDP-184 is that it comes with more than twice the number of voices on the YDP-144.

The YDP-144 only comes with 10 voices. Now, this isn’t bad, as you get multiple piano tones and other sounds like strings, electric piano, and bass. However, if you’re a pianist that likes experimenting with various other styles of music, this selection can be a bit limiting.

On the flip side, the YDP-184 has over 24 voices available in its sound library. This gives you many more options when it comes to what sounds you can play, which is another reason the YDP-184 is one of the most popular digital pianos available today.

Additionally, all 24 voices on the YDP-184 are top-quality. So, whether you’re using strings, bass, electric piano, or organ sounds on the YDP-184, you can expect a realistic tone that’s very close to the sound of the original instrument.

The YDP-144 uses the Graded Hammer Standard or GHS action of Yamaha. This is one of the best hammer actions that Yamaha offers, and you’ll find this action in many of their pianos. This is because GHS is a bit more affordable than other hammer action systems while still offering the progressive weight that you’d expect from an acoustic piano.

So, when you play the YDP-144, you’ll notice that the bass keys are a bit heavier than the treble keys. This is how acoustic piano hammer action works, so it was really nice that Yamaha captured this detail. On top of that, the black keys have a certain coating on them designed to resemble the feeling of real ebony keys, which is another nice detail.

That said, as much as I like the GHS action, it still lost to the GH3 action, which you’ll find on the YDP-184. This hammer action is a step above GHS, and it offers even more realism. This is because, on top of the progressive weight and the textured keys, GH3 pianos offer a faster spring back, which is reminiscent of premium acoustic pianos.

So, playing a piano with GH3 keys will feel much closer to a real acoustic piano. While this isn’t exactly something that beginners need, it makes a huge difference for experienced pianists looking for the most realistic playing experience possible.

The last feature I considered was the polyphony. This refers to how many notes a digital piano can play simultaneously. And while polyphony was a huge deal in the past, it isn’t that big of a consideration nowadays.

This is because most digital pianos now come with really high polyphony that you wouldn’t get back when computers weren’t as accessible. This is why you’ll find that the YDP-144, which is considered a mid-range piano, has 192-note polyphony, which allows you to play just about any piano piece and note combination imaginable.

This also lets you be more expressive in your playing, as notes will ring out much longer when you step on the sustain pedal.

That said, the Yamaha YDP-184 still wins the comparison because it comes with 256-note polyphony. Now, you’re never going to play 250 notes at the same time, regardless of what piece you’re playing. However, 256-note polyphony means that notes will ring out for much longer, and the piano is more capable of blending different voices together, which you can do with the dual mode on the YDP-184.

If you’re a beginner, spending extra money on a 256-note polyphony piano isn’t exactly necessary. However, even if you don’t notice it, the extra polyphony can be a huge difference maker, which is why I chose to highlight this feature for my Yamaha YDP-144 vs YDP-184 comparison.

These two pianos come from the same product line so you can expect quite a few similarities. To start, these pianos have a very similar design, layout, and interface. Controlling these pianos and jumping between different features is really easy once you get the hang of it. However, I should note that there was a bit of a learning curve in figuring out how to use all of the features.

Additionally, these pianos both come with split, dual, and duo modes. These are all the essential playing modes you’ll need whether you’re a professional or beginner pianist. These modes are great for piano lessons, discovering new sounds, and playing live, which is why I love a lot of the models in the YDP series.

And as I mentioned earlier, these pianos share the same tone engine. So, even if the YDP-184 has more voices than the YDP-144, you can expect these pianos to sound very similar.

But at the end of the day, the YDP-184 is more versatile and comes with a better feature set. And if you’re figuring out which piano is the better investment between the two, I would point to the YDP-184 for these very reasons.

Quick Rundown of the Yamaha YDP-184