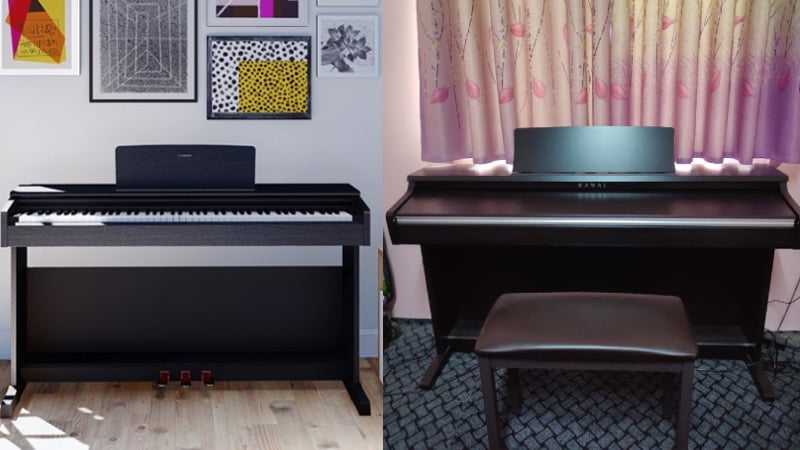 Kawai and Yamaha are some of the most popular piano brands on the market. And aside from their great collection of acoustic pianos, they also have an exceptional collection of digital pianos, such as the Yamaha YDP-144 and the Kawai KDP-110.

These are both digital console pianos that aren’t too expensive. On top of that, they come with great tones and various features that any pianist would enjoy. But since these pianos are both good options, it can be hard to choose between the two.

That’s why I created this Yamaha YDP-144 vs Kawai KDP-110 comparison article. Below, I’ll detail all the features, benefits, and drawbacks of each piano. On top of that, I’ll talk about who would benefit the most from these different pianos to make it easier to choose the right one for you.

So, keep reading to learn all the details of both pianos and find out which one is best for your needs! 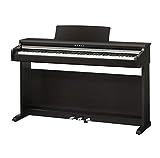 These two pianos come packed with features. But to keep this comparison as objective as possible, I chose to look at three main characteristics: tone, feel, and polyphony. These are the qualities that determine how good a digital piano is, and I would highly recommend focusing on these three main categories whenever you look at a digital piano.

After all, was said and done, the Yamaha YDP-144 won this comparison with a score of 3-1. The Kawai KDP-110 put up a good fight, but it could barely compete with the tone quality and polyphony of the Yamaha, which is why the latter wins the entire comparison.

Before you look at any other features of a digital piano, it’s crucial to conduct a tone test. A tone test allows you to judge if the piano produces decent sounds. With most digital pianos, it’s important to have a tone that closely resembles an acoustic piano. And between the YDP-144 and the KDP-110, the Yamaha clearly has better tones.

Even if the KDP-110 comes with more voices, I still gave the point to the Yamaha because of how high quality all the sounds are on this piano.

The main feature that drives a digital piano’s tone is the tone generator or tone engine. The KDP-110 uses Kawai’s Harmonic Imaging system. This is a great tone engine that uses high-quality samples to produce sounds. But unlike other pianos that use sample-based tone generators, the KDP-110 produces rich and clear tones that are honestly hard to beat.

That said, the Harmonic Imaging system doesn’t compete with the Yamaha CFX generator, which is what’s on the YDP-144. This is one of Yamaha’s newest tone engines, and it’s known for producing some of the highest-quality and most realistic piano tones on the market.

This is because of the source of the tones. While the Yamaha CFX system also uses samples, it derives them from Yamaha CF Grand Pianos. These are some of the most popular and best grand pianos on the market and are known for their bright and versatile tones.

Granted, the tones won’t perfectly replicate the sound of a Yamaha CF Grand Piano. However, they do come very close. And since Yamaha used the best recording equipment in the industry to record their samples, you’ll be hard-pressed to find tone engines that can compete with the CFX in this price range.

When it comes to the sound library, both pianos deliver what you’d expect from a digital console piano. These digital pianos are designed to replicate the sound and feel of an acoustic piano, so they both come with fairly limited sound libraries. That said, both pianos’ sound libraries contain all the essential tones a pianist would need, so I barely had any complaints.

The YDP-144 comes with 10 tones. Aside from a few acoustic piano voices, you can also use electric piano, strings, bass, and organ voices. Again, if you’re a pianist, these voices will allow you to play many genres and styles. And even if you lack the variety you get on some portable digital pianos, rest assured that you’re getting top-quality voices.

The Kawai KDP-110 has a similar sound library, but it comes with a few more voices. This piano has 15 voices, which is a bit better than the Yamaha. But at the end of the day, I couldn’t award a point to the Kawai for tone because even if it has more voices, the quality of the voices is far from what you can get and expect from the Yamaha YDP-144.

My next comparison point was the feel. After all, if you learned how to play piano on an acoustic instrument, you will want a digital piano that can replicate the feel and weight of playing an acoustic piano. And luckily, both of these instruments do that very well. I couldn’t pick a winner in this category. So instead, I awarded a point to each piano.

The Kawai KDP-110 uses the responsive hammer compact II action. This is a great hammer action system developed by Kawai to compete with the Graded Hammer Standard (GHS), which you’ll find on the Yamaha. The main goal of these hammer action systems is to replicate the slight weight differences on an acoustic piano. And to their credit, both pianos do this very well.

The main difference between these hammer action systems, however, is that the Responsive Hammer Compact II action has a counterbalance on the keys. This produces a more responsive spring back, which some pianists need. With premium acoustic pianos, you expect the keys to spring back as they do on the Kawai KDP-110, which is a point in the Kawai’s favor.

That said, while the Kawai feels a bit more realistic, most beginners and novice players won’t notice the difference. If the Kawai came with real wooden keys, then it would have easily beaten the Yamaha in this category. But since both pianos came with plastic keys that have a nice weight to them, I decided to award a point to both pianos.

The last comparison point I considered was the polyphony, which is the piano’s ability to play multiple notes simultaneously. For the most versatility and flexibility, it’s important that you get a piano with a high maximum polyphony.

The polyphony on the Kawai KDP-110 is more than decent. With 128-note polyphony, you can play just about any piano piece imaginable and get clear and distinct notes. That said, if you like using the sustain pedal, you might find some notes not ringing out for as long because the piano only has 128-note polyphony.

On the flip side, the Yamaha YDP-144 has 192-note polyphony. This isn’t the best polyphony you can get, but it’s much better than the Kawai KDP-110 and many other models in this price range. With the YDP-144, you have much more freedom in your playing since it can handle more notes and sounds playing simultaneously. So, between these two pianos, the YDP-144 might be the one that offers the versatility you need.

The biggest similarity between these two pianos is their design. While each piano has its unique details, they are both digital console pianos at the end of the day. This means that they are large, bulky, and designed to replicate the look, feel, and sound of an acoustic piano.

And while this added layer of realism is great for pianists, it also limits the capabilities of both pianos. Since you can’t bring these pianos around easily and they don’t have that many voices, they aren’t ideal for those that need a piano for gigs that comes with hundreds of voices.

Instead, these pianos are both made for pianists looking for an instrument to use at home or to keep at a performance venue. And in this price range, you can’t do much better than either the Yamaha YDP-144 vs the Kawai KDP-110.

Quick Rundown of the Kawai KDP-110