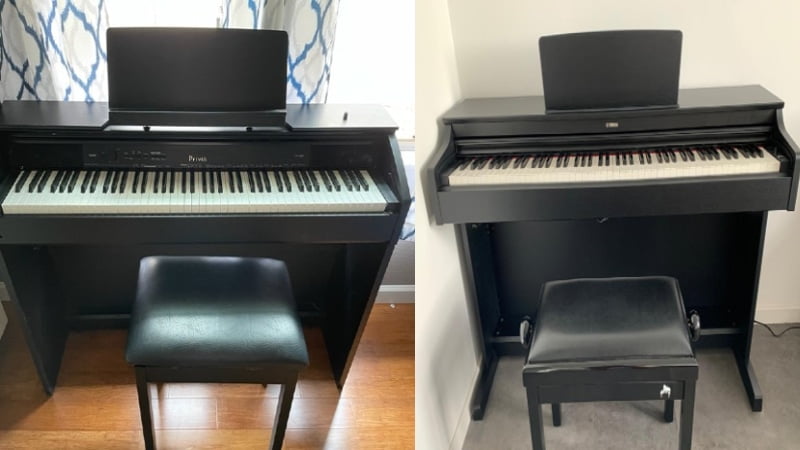 It’s always important to pay very close attention to the specs when buying a digital piano. That way, you can make sure you pick the best option for you.

And in this Casio PX-870 vs Yamaha YDP-163 review, we’re doing just that as we try to find out which piano is the better pick. Both of these pianos are considered some of the best in their price range, which is why they are often pitted against each other.

The Casio PX-870 is the flagship model of the Privia line, and while the Yamaha YDP-163 isn’t the start of the Arius collection, it’s one of the top models nonetheless.

But after testing out both pianos myself and doing the research, I found that the Casio PX-870 lives up to its flagship task as the wider sound library and different piano features narrowly put it in on top of the Yamaha YDP-163.

That isn’t saying that the YDP-163 isn’t a good option, but if you’re looking for the most bang for your buck, the Casio PX-870 is easily the right choice for you. 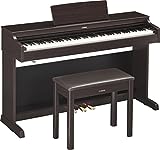 Figuring out the winner between the two was no easy task. But when I decided to put up all their differences in a head to head comparison, I found it much easier.

In the end, the score was a close 3-2 in favor of the Casio PX-870. While the Yamaha YDP-163 held its own in most categories, it fell short in terms of piano features, which is why the Casio was the winner after all was said and done.

Let’s start with the sound library, where the Casio PX-870 easily took the cake.

Now, don’t get me wrong, the Yamaha YDP-163 has a more than capable collection of voices. In the world of digital pianos, most models don’t have that many built-in voices, so since the Yamaha comes with 10 unique voices and tones, it is a fairly versatile instrument.

However, the Casio PX-870 almost doubles that as it comes loaded with 19 different voices. This gives you more options when choosing your tones, which is a huge factor in deciding on the best digital piano for you.

With that said, these Casio and Yamaha models have the same general tone categories. You get a collection of different acoustic and electric piano, strings, bass, and organ voices. But since the Casio gives you more options within these categories, it’s the more versatile option.

While the Casio PX-870 had a better sound library, there was no doubt in my mind (and ears!) that the Yamaha YDP-163 utilized a better tone engine.

The voices on the Yamaha YDP-163 are generated by the Pure CF Sound Engine. This is specifically designed for realistic piano tones as the samples come directly from Yamaha’s famous line of CF concert grand pianos.

So, if you’re looking for realistic piano voices, the Yamaha YDP-163 does a much better job. With that said, keep in mind that the Pure CF Sound Engine mostly applies to the piano sounds.

The Casio PX-870 uses the AiR Sound Source. This is a technique wherein the piano has multi-layered samples to produce a more realistic tone. The good thing about this is that the technology applies to all of the voices on the piano.

Because of this, the Yamaha’s piano tones definitely exceed the Casio’s. However, when it comes to the other voices like organ and strings, they are about the same when it comes to quality.

In terms of feel, these two pianos were tied for similar reasons to the tone. Each of them has their own set of advantages when it comes to feel and playability, meaning there was nothing definitive to separate the two.

If you want realistic hammer action, then the Yamaha YDP-163 has you covered. This piano uses the GH3 system. This is a bit more sophisticated than the Yamaha GHS, which is already considered one of the best hammer action systems on the market.

So, you get a weight very similar to that of an acoustic piano with the Yamaha. You can expect that the lower keys are heavier than the lighter keys, which makes for a more realistic playing experience.

Granted, the Casio PX-870 does a pretty good job at this as well with the Scaled Hammer II system. However, as good and accurate as Scaled Hammer II is, it simply can’t compare to the highly coveted GH3 system on the Yamaha.

The area where the Casio PX-870 won out over the Yamaha in terms of feel is key texture. The biggest benefit when it comes to playability on the Casio PX-870 is that both the black and white keys are coated. The result is a very accurate texture that’s incredibly similar to an acoustic piano with wooden keys.

The Yamaha YDP-163 features ivory-simulated keys. These feel pretty close to an acoustic piano, but since there’s no coating on the black keys, it isn’t as realistic as the Casio.

With that said, key texture isn’t a major feature for many beginners and even novice pianists, so this is a very minor flaw.

But if you’re a professional who has played on numerous acoustic and electric pianos, then the difference becomes more noticeable.

The deciding factor in this comparison was the piano features. And with more playing modes, better polyphony, and a wider range of effects, the Casio PX-870 took the cake which ultimately put it on top of the Yamaha YDP-163.

The most important playing modes for any pianist are dual, duo, and split mode. The Yamaha YDP-163 features two of these modes (dual and duo) which should be good enough for most beginners.

While these two features are useful for beginners, split mode adds another layer of versatility that serves as a great tool for performers and professionals. Split mode allows you to assign different voices to each side of the piano.

That way, it seems like you’re playing two different instruments when you’re only really playing one.

In terms of effects, the Casio PX-870 easily won out. This is because the only effect available on the Yamaha is reverb. Granted, reverb is arguably the most used effect among pianists to add character and texture to their tone.

With that said, the Casio model also features chorus and brilliance effects on top of the reverb. That way, you have much more control over the sound of the piano, which is very important for pianists who are particular about their instrument’s tone.

These pianos didn’t have too many similarities. However, one major similarity that everyone can notice is that they are console digital pianos.

Because they are console models, they aren’t designed to be moved around. Instead, they serve a similar purpose as an acoustic piano. So, if you get either of these options, make sure you have the right place for it where it can stay for many years to come.

Another similarity between the two is the pedal system. Both pianos have a three-pedal unit which gives you the same control over your tone as an acoustic piano. Additionally, these pedals allow you to add more dynamics when playing, which is very important for any kind of music.

But that’s about where the similarities end. These are two very different pianos. And while I preferred the Casio PX-870 due to its versatility, the Yamaha YDP-163 would serve any pianist very well.

Quick Rundown of the Yamaha YDP-163