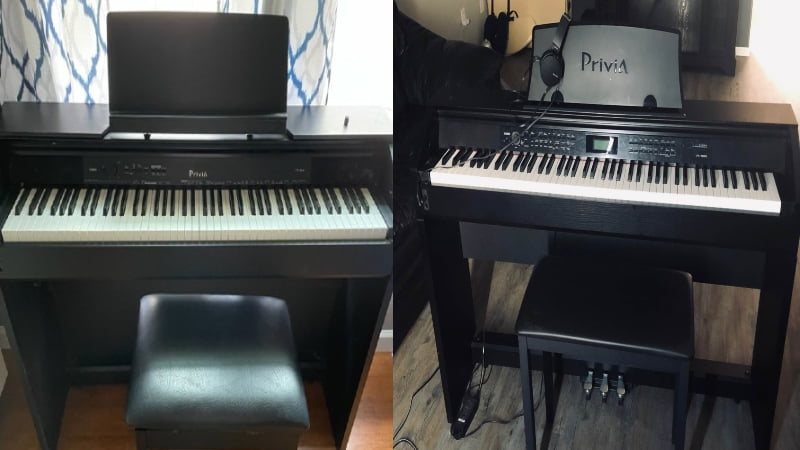 If you’re dealing with the Casio PX-870 vs PX-780 debate in your head, you’ve come to the right place as we lay out the features of both pianos and which is the better option for the money in this in-depth review!

When creating this Casio PX-870 vs PX-780 review, I had a hard time choosing the winner. However, considering the price point of both pianos and the features they offer, I ended up dubbing the Casio PX-780 as the winner.

While the PX-780 is the more affordable option, it comes with a more robust set of features such as a wider sound library, great MIDI recorder, and a variety of playing modes. And while the Casio PX-870 offered a similar set of features, it’s also the more expensive model, which is why I chose the PX-780 as the winner.

If you’re on the lookout for a generally affordable digital console piano for your home that comes with great feel, voices, and hammer action, either of these pianos will serve you well. However, if you’re looking for more variety and versatility, my favorite option between the two was the Casio PX-780 by a very tiny margin.

To determine the actual winner between these two pianos, I decided to compare the features. And since they come from the same product line and manufacturer, these two pianos were very close. However, the final score was 3-2 in favor of the Casio PX-780 because of its wider set of voices.

Whenever I compare two digital pianos, I always prioritize the tone. After all, a piano can have an amazing set of features, but if the tone quality is lackluster, it isn’t worth buying. And while both of these pianos have the same tone generator that produces rich and vibrant tones, the Casio PX-780 ultimately took the cake since it comes with a wider range of built-in voices.

These two pianos are tied in terms of tone generation. While the Casio PX-780 has different tones, both are equipped with the AiR Sound Source. This stands for Acoustic and Intelligent Resonator, and it works by using samples that the musician triggers whenever they press on a key.

However, while these two pianos use the standard sampling method for their tones, there is something that sets them apart from other models in its price range. The AiR Sound Source produces four different layered samples whenever you press down on a key.

That allows for the sound to travel through the air like an acoustic piano, so it makes for a more realistic overall tone. So, with these two pianos, you can always expect the tone to be good quality and can even compete with models in a more expensive price range.

Since these two pianos use the same tone engine, you may be wondering why I still chose the Casio PX-780 as the winner in this comparison. The main reason for that is because it comes with a wider sound library.

When dealing with digital pianos, you can’t expect too many tones. So, the 19 different voices on the Casio PX-870 are actually a fair amount. On top of that, there are multiple categories to choose from such as electric and digital piano, organ, strings, and even bass voices.

With that said, the Casio PX-780 blows it out of the park when it comes to the sound library. This model comes with over 240 different tones. So, you can choose from a wide variety of voices, and on top of the voices available on the Casio PX-870, you can also choose from more abstract voices like SFX or drums.

The reason I declared it a tie between these two pianos is because they have the same hammer action and key texture. As they are from the same product line, it isn’t a surprise that they share some of the same features.

For the most part, these pianos did the job very well. They feel very similar to the weight of an acoustic piano, and when testing them out, I could barely tell the difference.

So, if you’re in need of realistic hammer action for your piano, either of these Casio Privia models will do the job pretty well.

In terms of key texture, both of these pianos fare pretty well. This is because they both have textured plastic keys. Of course, these still can’t compare to wooden keys, but I noticed that both pianos replicate the texture of real ebony and ivory keys better than other models in their price range.

Key texture is a very subtle feature. However, the more you get used to playing on acoustic pianos, the more important they become. So, if you want to get a digital console piano that will last you a long time in your piano journey, either of these options will serve its purpose for a long time to come.

This is another area where the Casio PX-780 narrowly edged out the PX-870. However, I would like to put a strong emphasis on the word narrowly. The only reason I declared the Casio PX-780 the winner in this regard is the more robust recording function. But if it weren’t for that, these two pianos would be tied.

Both of these pianos come with their fair share of playing modes. You can access split, duo, and dual playing modes on these pianos. If you’re a beginner or novice, these are very useful features. While split mode and dual mode are considered performance playing modes that allow you to come up with unique voice combinations, duo mode is great for piano lessons.

With duo mode, you can divide the piano into two distinct zones with the exact same pitch and timbre. So, both the student and teacher can play along at the same time while hearing the same notes.

The Casio PX-780 won out in this comparison because of one tiny detail: the recording function. On the Casio PX-870, you can still record yourself playing and listen back on it. However, it has a maximum of two tracks. Granted, this is more than enough for a beginner, but it is a bit constraining.

With the Casio PX-780, you can record up to 17 tracks. This allows you to layer your music very well and create interesting pieces of music. With that said, this is a MIDI recording function so it won’t be studio quality. However, it will be good enough for listening back on your music and figuring out areas of improvement.

You can also use the recordings as studies of different compositions, allowing you to write and record your own music.

As we mentioned in this article, both the Casio PX-870 and 780 share a bunch of features. This is because they are part of the same product line from the same brand. So, on either model you can expect the same hammer action, tone generation methods, and even the same effects.

So, the reason I was able to determine a winner was because of two things: the price and versatility. While you can expect a similar tone quality from either piano, the Casio PX-780 comes with way more voices.

And even if they have the same effects, I also noticed that the Casio PX-780 is the more affordable model, which could be a huge help if you’re shopping on a budget.

I chose the Casio PX-780 as the winner in this article. But don’t get me wrong, either one of these options can serve as a high-quality piano for students, novices, and even performing artists alike!

Quick Rundown of the Casio PX-780