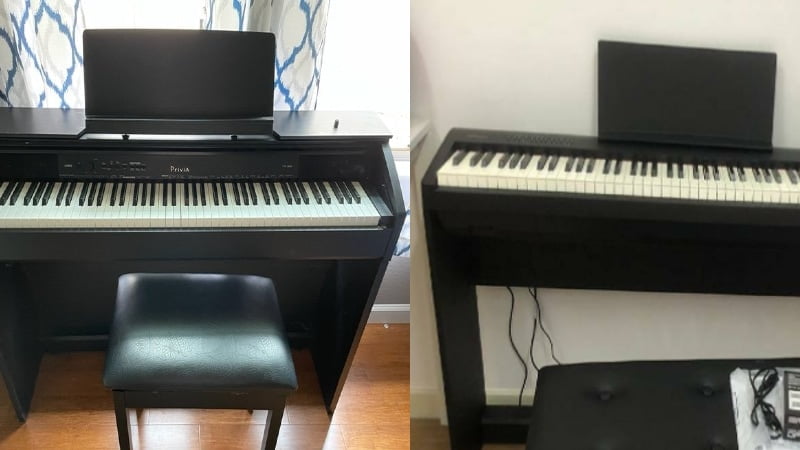 If you’re on the hunt for a console digital piano, this Casio PX-870 vs Roland FP-30 review lays out all the good and bad aspects of both models to make it easier for you to choose the right option.

In the world of digital pianos, both Casio and Roland are considered top brands on the market. And if you’re trying to figure out the right option for you, this Casio PX-870 vs Roland FP-30 review will be a huge help.

To be honest, I had a pretty hard time choosing a winner between the two as both pianos come with a great set of features that any beginner or novice would enjoy.

In fact, when testing out the features of both pianos, I found that they were tied in almost every aspect. From tone, all the way down to the feel and hammer action.

But in the end, I found that the Casio PX-780 had a better set of piano features that give it a whole lot more versatility, which is important for any pianist, whether you’re starting your journey or you’re already an established professional.

WIth that said, the Roland FP-30 is still a great option, but it doesn’t have as many versatile features.

Both of these pianos came with a great set of features. So, to figure out which model offered the better playing experience, I had to check out all the differences between the two. And after putting these differences up against each other in a head to head comparison, the final score was 3-2 in favor of the Casio PX-870.

So, while I found the Casio PX-870 to be the better option between the two, keep in mind that this was a very close fight and the Roland FP-30 could still fit your needs just fine.

Whenever I compare the tone of two different pianos, I focus on two aspects: the tone engine and the sound library. And the reason I couldn’t pick a winner between these two pianos is that they each have their own set of pros and cons that would serve different pianists.

The Casio PX-870 won out with a better tone generation system. However, the Roland FP-30 has a much wider sound library, which gives you a bit more flexibility, which is why I gave a point to each of the pianos in this comparison.

Let’s start with the Roland FP-30. It has the SuperNatural Piano Sound, which is a signature feature of a lot of Roland pianos. If you look at the system closely, you’ll find that it simply uses top-quality samples that pianists trigger when they press on a key. And since they use high-quality samples, the Roland FP-30 has a very good set of piano tones that could rival models out of its price range.

However, the thing is that the SuperNATURAL Piano Sound only applies to the piano tones of the instrument. The Roland FP-30 has a bunch of different voices, so there is a significant quality difference between the piano tones and the other voices.

With the Casio PX-870, the sound is more consistent. The Casio model uses the AiR (Acoustic Intelligent Response) Sound Source. Just like the Roland, this generator largely revolves around samples.

However, to make sure that the sound is very realistic and close to an actual acoustic piano, Casio added 4-layer samples to the piano. That way, the soundwaves travel through the air in a similar manner to an acoustic piano, making for a more realistic tone.

On top of that, this tone generator applies to most voices on the instrument, so you won’t get a major difference in the voice quality with the Casio PX-870, especially when you compare it to the Roland FP-30.

While the Casio model won out in terms of the tone generator, the Roland FP-30 was the winner when it came down to the sound library. The Casio PX-870 only has 19 voices. For a digital piano, this is actually a fair amount and gives you a lot of versatility.

With the Casio, you can choose between a range of piano, organ, strings, and even some bass tones. This is all you’ll really need as a pianist, which is why the Casio PX-870 easily covers all bases.

However, the Roland FP-30 has 35 different voices. Now, keep in mind that only the electric piano and acoustic piano tones have the SuperNATURAL Piano sound, while the other 22 use more generic samples.

So, while you have more options when it comes to voices on the Roland, some of the voices aren’t as high-quality as the piano tones. And on the flip side, the Casio PX-870 has a smaller selection, but the voice quality on the piano is much more consistent.

Since the pianos use a similar hammer action system and both feature coated keys, I couldn’t decide on a winner when comparing this aspect of the pianos as well. However, rest assured that both options provide a very realistic feel that is similar to an acoustic piano.

The Casio PX-870 uses Casio’s Scaled Hammer Action II system. The Roland FP-30, on the other hand, uses the PHA-4 system. While they work through different systems, both of these pianos aim to accomplish the same goal: mimicking the weight of an acoustic piano.

So, with either model, you can expect the lower keys to have a significantly heavier weight than the higher keys, just like an acoustic piano. And when testing out the models, I found that they did the job very well.

While they aren’t perfect replicas of acoustic piano hammer action, they do a pretty good job, especially for the price. So, if you want a digital console piano that has a similar weight to an acoustic piano, either model will serve that purpose.

In terms of key texture, both models do a pretty good job. However, I should note that the Casio PX-870 does a slightly better job in this aspect.

Both pianos have plastic keys, which puts them at a disadvantage when it comes to key texture. So, to correct that, the brands coated the keys with a substance designed to replicate the texture of ebony and ivory keys.

And while this makes the keys feel more realistic and closer to ebony and ivory, keep in mind that the Roland FP-30 only has a coating on the ivory keys. On the other hand, the Casio PX-870 has a different coating on the white and black keys, which makes for a subtle, yet noticeable difference.

If you’re a beginner, this won’t affect your playing too much. However, the more you play an acoustic piano, the more important this feature becomes.

This area was ultimately the deciding factor in figuring out the better option. And because of superior polyphony and a wider range of effects, the Casio PX-870 was the clear winner in this regard. And with that extra point, the Casio model ended up winning the entire comparison.

The Casio PX-870 has double the polyphony of the Roland FP-30. With that said, in this day and age, polyphony isn’t as big a deal as it used to be.

The Casio model needs 256-note maximum polyphony to help account for the multi-layered samples. That way, you can play a wide range of notes and chords without worrying about the piano malfunctioning.

On the flip side, the Roland FP-30 only has 128 note maximum polyphony. However, since it uses single samples for each note, you don’t need as much polyphony as the Casio. With that said, the lesser maximum polyphony does have a small effect on the versatility of the piano, which was a huge factor in helping me determine a winner between the two.

In terms of effects, Casio is the clear winner. The Roland FP-30 offers ambience and brilliance effects. This allows you to have some control over your tone, but the differences are so minimal that most beginners won’t notice it.

On the other hand, the Casio has ambience, brilliance, reverb, and chorus effects. So, not only can you make small tweaks to the texture and brightness of your tone, but you can also add depth and character.

So, if you’re looking to create your own unique set of tones that sets you apart from other pianists, the Casio PX-870 might be the option for you.

The main similarity between these two pianos is that they are console digital pianos. But since they are made by different brands, they do not share that many features. They use different hammer action, tone generation, and even playing modes, which is why making this comparison was very fun.

With that said, both of these pianos are great console digital pianos available at a slightly lower price than other models. That way, you can still get a high-quality instrument for practicing and performing, without having to bust the bank.

And while the comparison was very close all throughout, I have to say that the Casio PX-870 offered a bit more versatility than the Roland, which is why it ultimately won out in this comparison.

Quick Rundown of the Roland FP-30