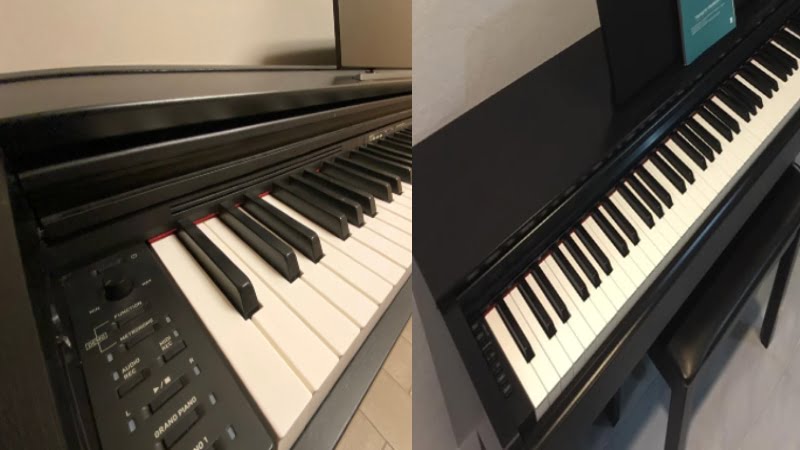 Looking for the best digital console piano for you?

Then you’re probably considering the Casio PX-870 vs the Yamaha YDP-143. After all, these are some of the best pianos for the price available on the market today.

And when testing them out myself, I found that they really live up to their name and reputation. The Yamaha YDP-143 comes with a set of exquisite tones, great hammer action, and a couple of cool features here and there that any pianist would love.

However, the Casio PX-870 knocks it out of the park in terms of versatility. So, if you’re looking for a piano that can handle a wider range of tasks, musical styles, and is more flexible overall, then you can’t go wrong with the Casio PX-870.

And while I found the Casio PX-870 to be the better overall option, the Yamaha YDP-143 isn’t a piano you should sleep on either. Both will serve you very well, but due to its superior feel and piano features, the Casio PX-870 knocks it out of the park.

It can be hard to find an objective winner when comparing two different pianos. But after going into an in-depth comparison of each of the pianos’ features, the Casio PX-870 ultimately won out with a score of 3-1.

The Yamaha YDP-143 was close behind, if not tied with the Casio PX-870 for most of this comparison, which is about what is expected from two models really close in quality. And in this section, we’ll dive into the details of each feature so you can figure out the right option for you.

It’s hard to beat out Yamaha’s tone. They are one of the best brands for digital pianos on the market today because of their tone. And in this comparison, there was no denying that the Yamaha YDP-143 had an edge over the Casio PX-870 in terms of tone.

However, this only applies to the piano sounds. When it comes to everything else, the story is a bit different, especially since the Casio PX-870 has a wider range of voices available.

So, in the end, I had no choice but to declare it a tie between the two in this category.

The Yamaha YDP-143 is equipped with the Pure CF Sound Engine. This is one of the best tone generators for digital pianos in its price range.

The reason for this is that the samples in the Yamaha YDP-143 come from actual Yamaha CF Concert Grand Pianos. These grand pianos are seen in venues worldwide and are known for their bright and crisp tones.

Yamaha made sure to use the best equipment possible to allow them to recreate the same crisp tones on their digital pianos.

Where the Casio PX-870 does excel, however, is in the non-piano voices. The Pure CF Sound Engine only applies to Yamaha’s piano-based voices, so there is a slight difference in quality when you try out the other tone options on the YDP-143.

The Casio PX-870 has a wider sound library than the Yamaha YDP-143. The Casio features 19 different voices. These range from a couple of different piano voices, some strings voices, organ voices, and even bass and electric piano.

On the Yamaha YDP-143, you only have 10 voices. While you generally get the same tone categories, you don’t get as many options as you do with the Casio PX-870.

With that said, the advantage of Yamaha in this regard is the fact that the piano tones use the Pure CF Sound Engine, which ensures that they are all top-quality voices. But if you’re in need of versatility, then the Casio PX-870 is the better option for you.

Both of these pianos use a hammer action system designed to replicate an acoustic piano. The Casio PX-870 features the Scaled Hammer II system while the Yamaha YDP-143 features the Graded Hammer Standard (GHS) system.

Both of these pianos feature a heavier weight on the lower keys than the higher keys. This is meant to replicate the way an acoustic piano’s keys are weighted. And for the most part, both of the pianos do a fairly good job.

When testing out these pianos, I honestly could barely feel any difference between the weight of both pianos. But what I did learn was that both the Casio PX-870 and the Yamaha YDP-143 feature nicely weighted keys.

On top of that, if you have a lighter or heavier touch than other pianists, you can even adjust the touch sensitivity of the keys to tailor the piano to your hands and fingers.

In terms of key texture, the Yamaha YDP-143 falls short. This is because it features glossy plastic keys. This isn’t uncommon in this price range, so it isn’t too big of an issue. However, if you’re really used to the way an acoustic piano’s keys feel on the fingers, you can tell the difference.

This doesn’t have a big effect on playing for beginners. But if you’re a novice or professional pianist, it becomes a slightly bigger issue. That’s why I really appreciated the textured keys on the Casio PX-870.

The Casio PX-870’s keys feature a different coating on the white and black keys. This results in a slight textural difference between the two that simulate the texture of real wooden piano keys.

With that said, it isn’t a perfect replication. In fact, you can still kind of tell that these aren’t wooden keys. But if you compare the Casio PX-870’s key texture to the Yamaha YDP-143, the Casio is miles ahead, which is why it took the point in this comparison.

These are extra features, but they make a huge difference in the long run, which is why included the piano features as a point of comparison in this review.

For most digital pianos, the three playing modes pianists find the most useful are split, dual (layer), and duo (lesson) mode. The Casio PX-870 features all three of these modes while the Yamaha YDP-143 only features dual and lesson mode.

With that said, the two modes on the Yamaha are probably the most useful modes for beginners. With layer mode, you can blend two different voices together, which creates a very unique tone.

With lesson mode, you can turn the piano into two mini keyboards. This is designed for piano lessons so the teacher and student can easily play alongside each other without having to cross over to the other side.

The last mode on the Casio PX-870 that isn’t available on the Yamaha YDP-143 is split mode. If you’re a beginner, you likely won’t need this mode as much. However, if you’re a performing or novice pianist, then this feature becomes more useful.

Split mode allows you to assign different voices to either side of the piano. For example, you can have a piano tone on the left side and an organ tone on the right. That way, it can be like you’re playing two instruments at the same time.

The Yamaha YDP-143 only comes with reverb effects. Granted, if you’re a pianist, this is arguably the most useful effect out there. However, you get slightly more versatility on the Casio PX-870 as it also comes with chorus and brilliance effects on top of the reverb.

With that said, keep in mind that the reverb effect on the Casio PX-870 is called the Hall Simulator, which could lead to some confusion for some pianists.

These two pianos shared one key similarity: they are both digital console pianos. That makes them very fit for venues and homes. However, since they aren’t portable, they might not be the most useful option for gigging musicians who find themselves on the road a lot.

Aside from that, these two pianos don’t have that many similarities. They both feature weighted keys, but they run on different hammer action systems.

With that said, both of these pianos can serve you very well. In terms of quality, both pianos are on about the same level. However, if you need an extra bit of versatility, the Casio PX-870 will serve you better.

Quick Rundown of the Yamaha YDP-143