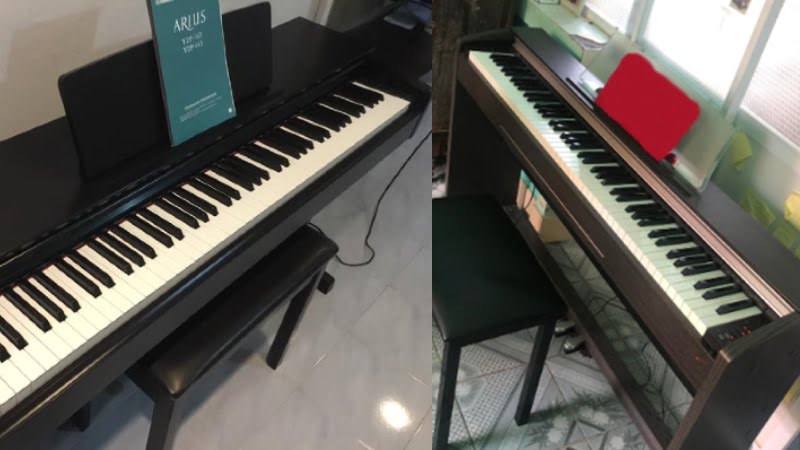 When talking about a good digital piano, two brands that come to mind are Casio and Yamaha. After all, these two brands are known for high-quality digital pianos that offer a lot of functionality.

And if you’re a beginner looking for your first console digital pianos, this Casio PX-770 vs Yamaha YDP-143 comparison might suit you.

In this article, we’ll discover why I found that the Casio PX-770 is the better option over the Yamaha YDP-143. For the most part, it was a very close fight since both pianos offer a bunch of different features that cater to beginners and experienced players alike.

But because of its superior sound library and wide array of piano features, the Casio Px-770 ultimately came out the winner.

With that said, the Yamaha YDP-143 is definitely still worth considering. However, while it comes with premium features, it can be hard to get your hands on this piano since the availability is very limited.

Comparing two different digital pianos is a tough task. But if you compare each of the features head to head, it’s much easier to find an objective winner.

And when doing the research between these two pianos, I found that when it came down to the features, the Casio PX-770 was the clear winner. At the end of it all, the score was 3-1 in favor of the PX-770.

Keep reading to learn how the Casio PX-770 beat out the Yamaha YDP-143.

When testing out digital pianos, the first thing to consider is tone. You want to get a digital piano that sounds similar or at least close to the tone of an acoustic piano. Additionally, you also want pianos that offer a lot of versatility when it comes to the voices.

And between these two models, while their tone quality is very similar, the Casio PX-770 eventually won out because of the wider set of voices and tones.

The Yamaha YDP-143 uses the Pure CF Sound Engine. This is popular with some of the more expensive Yamaha products and is known for emulating the sound of the Yamaha CF concert grand pianos. In terms of tone generation, Yamaha has a slight advantage since they produce their own line of world class acoustic pianos.

So, when collecting the samples for the YDP-143, Yamaha used sounds from their actual CF concert grand pianos. On top of that, these samples were recorded with top-of-the-line equipment, which results in a very rich and distinct tone that is very close to a real acoustic piano.

On the flip side, the Casio PX-770 uses the AiR (Acoustic and Intelligent Resonator) Sound Source. This technique still uses samples, and to their credit, Casio loaded this model with some very high quality sounds that resemble an acoustic piano.

So, with both of these pianos, you get a very realistic tone. Since they are so close in tone quality, the better sounding piano is largely decided by each individual’s personal preference.

Since they produce similar quality tones, the reason that the Casio PX-770 eventually won out in this comparison was its sound library. With the Casio PX-770, you get to choose between 19 different voices.

Digital pianos are known to have a smaller sound library than regular keyboards. This is because manufacturers focus on quality over quantity with digital pianos. So, since the Casio PX-770 has 19 different voices, you have a lot more versatility compared to other digital pianos in the same price range.

The Yamaha YDP-143 is a prime example of how the manufacturer chose to focus on quality over quantity. This piano only comes with 10 different voices. While all of the voices are top-quality, there’s no denying that you will be limited by the amount of choices. So, the Casio PX-770 ultimately won out because of the wider sound library.

With that said, keep in mind that both pianos have a similar set of voices, it’s just that the PX-770 has more choices. So, you can expect the same voice categories with both pianos such as acoustic and electric piano sounds, organ tones, and even string and synth tones which some pianists will find incredibly useful.

There was no clear winner when comparing the feel of both pianos. Usually, all it takes is one test run of both models to find the better option. However, I found that these two pianos feel very similar. While there are slight textural differences between the two, the hammer action is consistent with both pianos, which means that either option will offer a very realistic piano feel.

As mentioned earlier, the hammer action of both models feels about the same. However, keep in mind that these two pianos still use different systems.

The Casio PX-770 uses regular scaled hammer action. With this system, you have heavier keys on the left side that get progressively lighter as you approach the higher keys. This is the same way acoustic piano hammer action works, which adds to the realism of playing the PX-770.

The Yamaha YDP-143 achieves the same hammer action effect, but it uses a different system. The Yamaha model features Graded Hammer Standard or GHS hammer action. Again, this replicates the slight differences in action with the left and right keys.

So, regardless of which model you choose for your home, you can expect that they will feel very similar to each other.

The Yamaha YDP-143 doesn’t feature a coating on the white keys. This is because the texture of plastic keys isn’t too far off from the white keys on an acoustic piano. So, this isn’t exactly necessary but it would have been nice if Yamaha included a coating for the white keys as well.

The black keys on the YDP-143, on the other hand, are matte. This makes them feel different from the white keys and allows for a more realistic touch when playing.

However, since the Casio PX-770 features a coating on both the white and black keys, it admittedly has a slight edge.

The main deciding factor between these two pianos were the piano features. The Casio PX-770 features more playing modes and effects than the YDP-143, which is one of the major reasons it won out over the YDP-143 after this in-depth comparison.

The Casio PX-770 features split, lesson, and dual mode. The Yamaha YDP-143 only features dual and lesson mode. While all of these features are incredibly useful, there’s no doubt that you have more versatility with the Casio PX-770.

With dual mode, you can blend two different voices at the same time. This allows you to make unique combinations with different voices. While both pianos have this feature, you can find more uses for it on the PX-770 since it comes with a wider sound library.

Lastly, with lesson mode you turn the piano into two mini keyboards with the same timbre and pitch. That way, it’s like you have two separate pianos. With this mode on, you can play duets or have your teacher demonstrate different techniques to you without having to cross over.

Additionally, both pianos feature a 2-track recording mode. While the recording quality won’t be good enough for the studio, it’s more than enough for you to record and listen back on your playing and learn where you need to make improvements.

There aren’t too many similarities between these two models since they are made by different manufacturers. However, they do share one key characteristic: they are both console digital pianos.

These pianos are designed to be set up in one place and kept there for a while. Unlike their digital counterparts, you cannot remove these models from the furniture stand. However, since they are designed to stay in one place, they arguably feel closer to an acoustic piano than any portable digital pianos on the market today.

And while both pianos offer high-quality and versatile features, you have more options with the Casio PX-770. And since flexibility is a top priority for digital pianos, the Casio PX-770 was ultimately the better option.

Quick Rundown of the Yamaha YDP-143