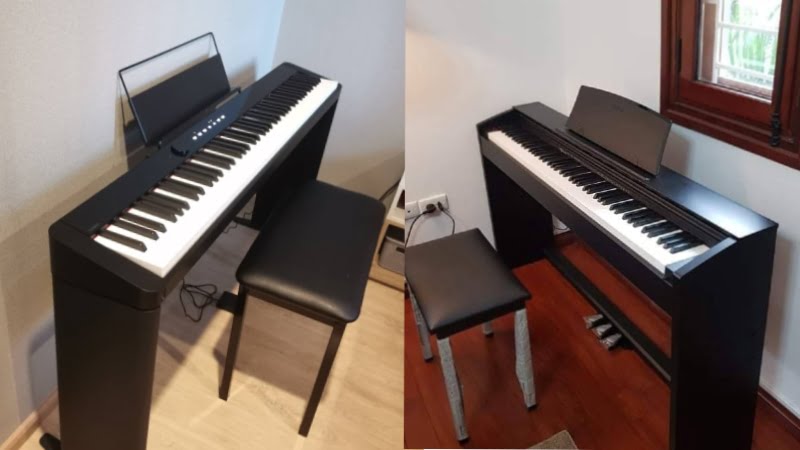 Discover the best digital piano for you in this Casio PX-770 vs S1000 comparison!

The biggest question you’ll ask yourself when choosing to buy a digital piano is whether to get a portable or console option. Even if you’re shopping on a budget, you’ll find many portable and console digital pianos on the market, making it hard to find the best model.
For example, when I went to buy my first digital piano, I found myself choosing between the Casio PX-770 and the S1000. These were both within my price range and offered a wide range of features for the price.

And as much as the Casio PX-770 was an enticing option, I ended up going for the Casio PX-S1000. Both pianos have a great tone engine and realistic feel. However, I ended up choosing the PX-S1000 because of its versatility and portability.

That said, there are some people that might benefit more from the Casio PX-770. So, in this Casio PX-770 vs S1000 comparison, I’ll detail the features of both pianos and show you why I found the PX-S1000 to be the better option. And by the end, finding the best piano for you will be a breeze! 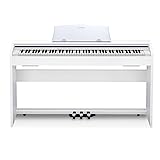 There were four main criteria that I used to compare the PX-770 vs the S1000. And after judging the pianos based on tone, feel, extra features, and versatility, the PX-S1000 edged out a narrow 3-2 victory.

I have to admit that it was a very close fight. And the reason I chose the PX-S1000 is that you might find it more useful to have a digital piano that you can bring with you to lessons, rehearsals, and performances. But if you want to learn the exact features, benefits, and drawbacks of each piano, keep reading.

If you’re looking for high-quality and realistic piano tones on a budget, Casio’s AiR Sound Source is what you need. This is the tone engine you’ll find on both of these pianos and is arguably one of the best in its price range. Compared to other tone engines in the same tier, the Casio option easily beats out the competition.

While the AiR Sound Source still relies primarily on samples that you trigger when you press a key, it does it a bit differently. This is because Casio has loaded the pianos with multi-dimensional recordings that contain much more detail and character than your typical tone engine.

After conducting my tone tests, I judged these pianos based on how they felt. And despite the Casio PX-S1000’s great hammer action system and slightly textured keys, it couldn’t beat the Casio PX-770.

As a console digital piano, the Casio PX-770 has an automatic advantage over the PX-S1000 in terms of feel. The PX-770 looks much more like a digital piano, and Casio made a bigger effort to capture the details of an acoustic piano with this model.

This is because the Casio PX-770 has better-textured keys than the PX-S1000. While the PX-S1000 has the same hammer action system with heavier bass keys and lighter treble keys, it fell short in terms of key texture.

I was honestly very impressed by the hammer action on both pianos. And if you close your eyes, you can barely tell the difference in the weight. But since the PX-770 has textured keys and a more realistic look, it ended up taking this point.

Another comparison point between these two pianos was the piano features. But since they had the same effects set and playing modes, I decided to look at polyphony. The Casio PX-S1000 surprisingly has a higher maximum polyphony than the PX-770, which is why it ended up taking this point.

The Casio PX-S1000 has 192-note maximum polyphony. This is much higher than other portable digital pianos in its price range. And I was also surprised to learn that this is higher than the polyphony on the Casio PX-770.

The Casio PX-770 only has 128-note maximum polyphony. And while this is good enough for most beginners and novice players, there’s a big gap between this piano and the PX-S1000.

When you have higher polyphony, you can play more notes simultaneously. And while you won’t have a piano piece that requires you to play 192 notes at the same time, keep in mind that you are still playing notes when you press down on the sustain pedal.

With the Casio PX-S1000, you can be a bit more expressive with your playing. This is because the notes will ring out much longer and naturally with the sustain pedal engaged, even if you keep adding more sounds on top of them.

If you’re looking for a versatile piano that can handle various piano pieces and allow you to play more expressively, the Casio PX-S1000 is what you need. While the PX-770’s polyphony is still decent, it isn’t as good as the PX-S1000.

The tie-breaking factor between these two pianos was portability. At the end of the day, I ended up choosing the PX-S1000 because of the possibilities that come with a portable digital piano. While I loved the features and feel of the PX-770, I wouldn’t be able to bring it around.

The Casio PX-770 is better for people who want a permanent piano for their home. It’s a very heavy instrument that will definitely give you a hard time if you want to move it around. On the flip side, the Casio PX-S1000 is easily portable, which gives you many more possibilities.

While it may not seem like it at first glance, the Casio PX-S1000 and the PX-770 share many similarities. They come from the same collection, so they come with some of the same features. As mentioned earlier, these pianos share the same tone engine, and almost every tone in their sound library is identical. Save for one extra grand piano voice on the PX-770; both pianos have the exact same library.

On top of that, these pianos have the same playing modes. With split and dual mode, you open up many opportunities. Whether you want to play piano duets, create unique tones, or use the piano for live performances, both models have got you covered.

Additionally, these pianos are in the same price range. They are some of the best models in the sub-$1,000 range and offer a lot of value for the money. In fact, if the PX-770 were portable, it would probably be tied with the PX-S1000 in this comparison.

There’s no lie that the PX-S1000 was my top pick between the two. However, I found that this is only the case if you need to move the piano around. If you’re fine with a piano that stays in the same place in your home or performance venue, then there’s nothing wrong with the PX-770.

Quick Rundown of the Casio PX-S1000