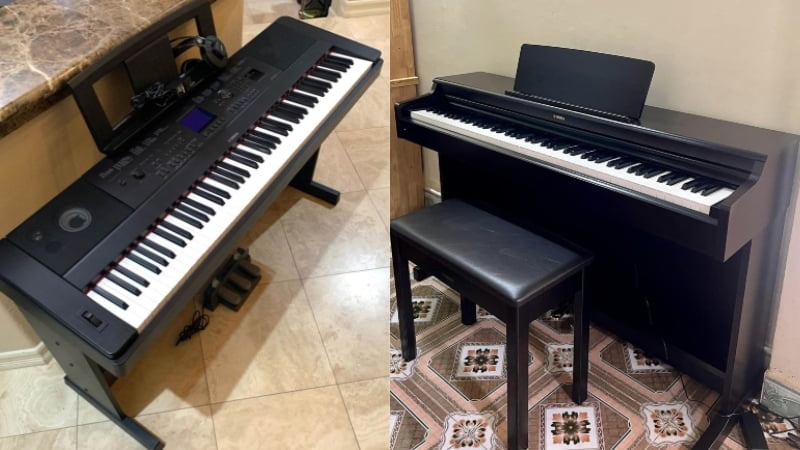 Finding a digital piano is hard, but with this Yamaha YDP-164 vs DGX-660 review, you’ll learn why the DGX-660 is better, making it much easier to choose the best option!

Whenever someone asks for help in buying a digital piano, I point them toward the Yamaha brand. Since Yamaha has been around for decades, the brand has grown into one of the most-trusted digital piano manufacturers on the market.

And two great examples of Yamaha’s exquisite craftsmanship and attention to detail are the YDP-164 and the DGX-660.

The YDP-164 is one of Yamaha’s best console digital pianos, while the DGX-660 is one of their best portable models. But which is the best pick between the two?

I had the pleasure of testing these two models myself, and when conducting this Yamaha YDP-164 vs DGX-660 comparison, I found that the DGX-660 is the far superior pick.

While the YDP-164 comes with a range of top-tier features that any pianist would enjoy, it simply couldn’t compete with the versatility and flexibility of the DGX-660. And in the rest of this article, I’ll explain the details of this comparison.

That way, you understand the benefits of either piano and which pianists they are made for. And by the end, you’ll easily be able to choose one that perfectly fits your needs and preferences!

To make this comparison simple, I looked at three key qualities of these pianos – the tone, feel, and piano features. In my opinion, these are the characteristics that make a piano and the most important considerations when buying one yourself.

Based on these three comparison points, the Yamaha DGX-660 came out on top with a score of 3-2. This was a really close comparison, with each piano having its own set of benefits and advantages.

However, at the end of the day, the DGX-660 is the more flexible and versatile model, which is why it won the comparison.

These pianos run on different tone engines and have vastly different sound libraries. While the Yamaha YDP-164 had a slight advantage when it came to tone quality, the DGX-660 has a much more flexible and versatile sound library. And since each piano has its own perks regarding tone, I couldn’t pick a single winner and instead awarded a point to both models.

The Yamaha DGX-660’s tone engine is one of the brand’s best. This piano utilizes the PureCF Sound Engine, which contains high-quality samples recorded directly from Yamaha CF Grand Pianos. This is why the DGX-660 produces an incredibly realistic piano sound, replicating the brightness and clarity that define the brand’s CF Grand Pianos.

In my experience, there aren’t a lot of tone engines that can compete with the Pure CF Sound Engine. However, Yamaha recently released a more updated version of this tone generator known simply as CFX, which is what you can find on the YDP-164.

The CFX tone engine works similarly to the Pure CF Sound Engine. The samples on this engine also come from Yamaha CF grand pianos. However, the major difference is that Yamaha used more advanced technology to capture all the details of these pianos’ sounds.

This is why the YDP-164 sounds a bit more realistic than the DGX-660. Now, the difference isn’t large at all. In fact, these pianos almost sound identical. But if you pay close attention, the YDP-164 has a bit more clarity and detail in its piano tones, which is very important.

One of the biggest advantages the DGX-660 has over the YDP-164 is its sound library. The YDP-164 is a console digital piano, so it’s designed to look, feel, and sound closer to an acoustic piano. This is why this model only has 10 different tones, each of which is very high-quality and realistic.

The YDP-164 contains a range of acoustic and electric piano tones along with a few organ, strings, and bass sounds. These are all the sounds you’ll need a pianist, especially if you don’t plan on experimenting with synthesizers and other modern sounds.

However, if you want the versatility and freedom to play any type of music on the piano, the DGX-660 is the better option. It comes with over 550 different voices that, include the PureCF Piano voices, the voices on the YDP-164, and a lot of different tones from the XGLite sound pack.

To be honest, the DGX-660’s sound library is a mixed bag. Many tones are very realistic and would work well in both live and recorded music. However, you can also expect a range of voices that aren’t that realistic and don’t do the original instrument that much justice.

One thing I must say about these pianos is that they do a great job of replicating the feel of an acoustic piano. Even if the DGX-660 is a portable model, it has a similar hammer action to the YDP-164, which is why I could barely tell the difference when judging the way the pianos felt. So, it should be no surprise that both pianos came out with a point each for this category.

Both of these pianos utilize the Graded Hammer Standard or GHS system, that’s a signature feature of many Yamaha pianos. This is considered a mid-range hammer action system that replicates the slight weight differences on an acoustic piano’s keys. That’s why I felt like both the YDP-164 and the DGX-660 did a great job of replicating a real piano’s weight.

That said, this hammer action system isn’t perfect. For example, the way the keys spring back could be a bit better and smoother, like on some of the more premium Yamaha options. Additionally, the piano keys lack the texture you would typically look for in an acoustic piano.

If you’re a beginner or not that particular about how a piano feels, this shouldn’t be a big deal. But if you’re looking for the most realistic piano feel available, both of these options fall short of feeling exactly like an acoustic piano.

The last comparison point between these two pianos is the piano features. I’m referring to the piano’s polyphony, effects, and overall versatility. And in this category, the Yamaha DGX-660 was the clear winner. You can do a whole lot more with this piano compared to the YDP-164, and it’s the main reason this piano ended up winning the entire comparison.

To start, both of these pianos have 192-note polyphony. So, you won’t have to worry about the piano not sustaining notes long enough or not having enough clarity when you play dense chords. This also comes in handy when blending multiple voices together.

However, the Yamaha DGX-660 comes with more effects than the YDP-164. This gives you more control over your tone as the DGX-660 allows you to add chorus, reverb, and EQ effects to the piano tone, while the YDP-164 only offers reverb effects.

Additionally, the DGX-660 is the more versatile model overall. As a portable piano, you can easily bring this model with you to jams, gigs, and even piano lessons. And with all the different voice options on this piano, you won’t run out of ways to experiment and truly find your sound.

Because of this, I had no choice but to declare the DGX-660 the winner. The YDP-164 is a great model if you need a console digital piano, but if you need more versatility, I’d recommend the DGX-660.

These are very different pianos, which is what made this such a fun comparison to make. However, despite all their differences, they still share some similarities that are worth noting. That way, you get a complete picture of both pianos and the benefits they offer.

Additionally, these pianos offer a lot of value for the money. While they aren’t exactly the cheapest digital pianos available, they are much more affordable than other models that come with a similar feature set.

So, you’ll be good regardless of which piano you choose. But again, I decided to declare the DGX-660 this comparison’s winner because of how versatile it is.

Quick Rundown of the Yamaha YDP-164