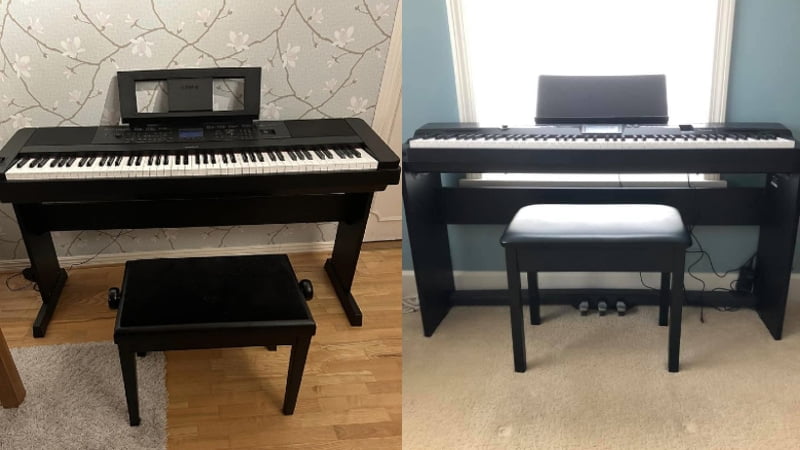 Learn the differences and advantages of both instruments in this Yamaha DGX-660 vs Casio PX-360 review.

There’s a high chance that you’ll find yourself choosing between a Yamaha or Casio model when shopping for digital pianos. These are easily some of the best digital piano manufacturers on the market, and you’re sure to get a good model from these brands.

But in this Yamaha DGX-660 vs Casio PX-360 comparison, we’re only looking at two particular models. These pianos fall within the same price range, come with similar features, and make for a great comparison.

And after rigorous tests and tons of research, I found that the Casio PX-360 is the better option. This is the more modern piano, so it comes with features more suited to the modern pianist.

Though, depending on your needs and preferences, you might actually prefer the DGX-660.

That’s why I’ll get into the details, features, and benefits of both pianos below. That way, you get a clear picture of the DGX-660 and the PX-360, making it much easier to choose the best piano for your needs.

I looked at all the features of these pianos. However, I chose three main comparison points to help me find the best instrument – the tone, feel, and piano features. These are arguably the most important characteristics of a digital piano, and they should be your main considerations when buying one for yourself.

Based on these comparison points, the Casio PX-360 wins with a score of 2-1. As you can tell, it was a very close fight, and it really could have gone either way. I’ll explain this further in the section below, so keep reading to get a better idea of why the Casio PX-360 is better than the Yamaha DGX-660.

Whenever you test a digital piano, the tone should be the first thing you check out. The tone is the way a piano sounds, and it’s probably the most important feature of any digital piano. And when I compared the tones of the Yamaha DGX-660 against the Casio PX-360, choosing a winner was really easy.

The Yamaha DGX-660 has a more sophisticated tone engine and comes with more voices. So, it gives you better voice quality and more options when playing various musical styles. This is why I ended up giving this point to the Yamaha piano.

One thing you can rely on when buying a Yamaha digital piano is that the tone will be top-tier. And luckily, the Yamaha DGX-660 is no exception. This piano comes with the Pure CF Sound Engine. While this isn’t the newest tone engine from Yamaha, it remains to be one of their best options that are ideal for just about any pianist.

This is because the Pure CF Sound Engine derives its piano tones from Yamaha CF Grand Pianos. The DGX-660 is loaded with recordings of the CF Grand Pianos, which is why you can expect a bright and rich piano sound from this instrument. And since Yamaha only used the best recording equipment to gather the samples, the piano sounds very realistic as well.

While it would have been nice to see the more modern CFX tone engine, the Pure CF Sound Engine easily beats out the AiR Sound Source, which you will find on the Casio PX-360. The AiR Sound Source does produce fairly realistic tones, but when compared to the Yamaha, it doesn’t hold up.

Don’t get me wrong – you can still get great tone from the Casio PX-360. But if you’re looking for the best tone quality between these two pianos, you’re much better off with the Yamaha DGX-660.

Another reason the Yamaha DGX-660 won the tone comparison is because of its sound library. As a modern pianist, it’s important to have many sound options to play different genres. And with the Yamaha DGX-660, you have all the voices you will ever need and a whole lot more.

This piano comes with over 550 different sounds you can use. This includes a wide range of piano tones, electric piano tones, organs, strings, and even drum sounds. So, you won’t run out of options when using the DGX-660.

That said, keep in mind that not all of the tones come from the Pure CF Sound Engine. This is why when I conducted the tone tests for these pianos, I noticed that some of the Yamaha’s voices weren’t as realistic or high-quality as others.

However, when compared to the Casio PX-360, the Yamaha piano still wins. The Casio PX-360 has a lot of voices, with over 300 presets to choose from. While this is good, it doesn’t compare to the versatility and flexibility you get with the Yamaha DGX-660.

The next comparison point was the feel. It’s best to get a digital piano that replicates the feel of an acoustic piano. And between these two options, the Casio PX-360 wins. Even if the hammer action systems are very similar, the Casio PX-360 goes the extra mile with textured keys, which is why it feels more realistic than the Yamaha DGX-660.

The hammer action systems on both pianos are some of the best you will find in this price range. The Yamaha DGX-660 comes with the Graded Hammer Standard or GHS. On the flip side, the Casio PX-360 comes with Tri-Scaled Hammer Action II.

This means that the lower keys will be significantly heavier than the higher keys. This is the same way a traditional acoustic piano is set up and adds a whole new layer of realism when playing the pianos.

But even if I found that the hammer action systems of both pianos are basically tied, the Casio PX-360 wins because of the key texture. Both pianos have plastic keys, but the Casio has a specific coating on the white and black keys to simulate the texture of ebony and ivory.

The Yamaha DGX-660 only has a coating on the black keys. So, you will immediately notice the glossy and plastic texture on the white keys. Most beginners won’t notice this small difference. But once you get familiar with the feel of acoustic pianos, the difference is more evident.

This is a very small detail, but when comparing pianos of this caliber, there are very fine margins. And for this reason, the Casio PX-360 takes the point.

The Casio PX-360, as the more modern option, has better piano features. To start, it has a touchscreen display that you can use to navigate through the different modes, tweak the effects, and more. The Yamaha DGX-660 also has a display, but it is far from the functionality you get from Casio’s display.

But it doesn’t end there. Aside from the polyphony and the display, the Casio PX-360 also has more effects. This gives you more control over your tone and is great for pianists that like to tweak the sound of their instrument while playing.

While these two pianos are very different from each other, they still share a lot of similarities. For example, these are both portable digital pianos designed to be brought around. So, whether you need a piano for gigs, practice, or piano lessons, these instruments have you covered.

On top of that, these are easily two of the best pianos in their price range. While they aren’t exactly cheap, they offer a lot of value for the money. You can compare either of these pianos with instruments in much higher price ranges, and they will still hold their own.

And while I dubbed the Casio PX-360 the winner in this comparison, both instruments will definitely serve you well. If you’re looking for a flexible and very functional digital piano to use for different applications, you can’t go wrong with either option.

However, if you want a more modern instrument, you might want to go for the Casio PX-360.

Quick Rundown of the Casio PX-360