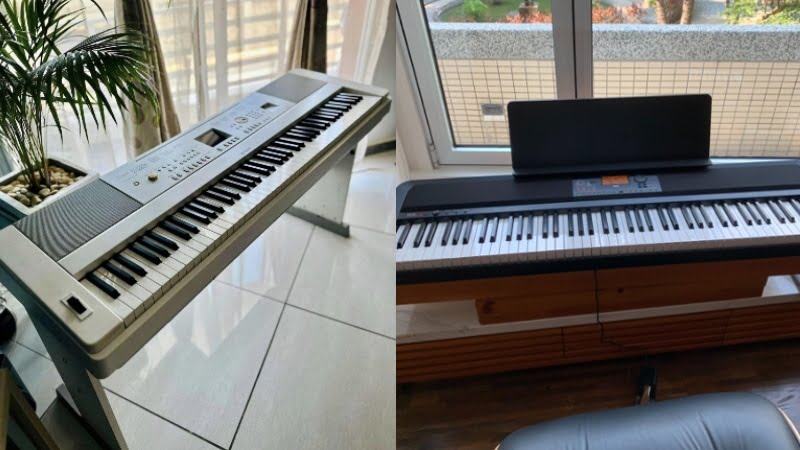 In this Korg XE-20 vs Yamaha DGX-660 review, we’ll find out which arranger piano offers the best value for the money and which one would be the better pick for you!

I was more than ready to make this Korg XE-20 vs Yamaha DGX-660 comparison. Since these are two very affordable arranger pianos that offer various features, comparing them was a whole lot of fun.

And while I would recommend either option for anyone looking for a versatile and high-quality instrument, I have to admit that the Yamaha DGX-660 holds a slight edge. This is because the Yamaha DGX-660 has a much more realistic feel and higher-quality sounds, which are two things that you need to prioritize when buying an arranger piano.

That said, the Korg XE-20 is still a great digital piano. While it fell slightly short of the Yamaha DGX-660, it offers tons of piano features and is more than enough to satisfy the needs of any pianist.

If you’re on the fence regarding which piano is the best fit for you, you’ve come to the right place. Below, I’ll be giving a detailed comparison of both pianos so that you won’t have a hard time choosing between the two.

There were three main categories I considered when comparing these two pianos, these were the tone, feel, and the piano features. These are what I consider the most important characteristics of a digital piano, and trust me when I say that the Korg XE-20 and the Yamaha DGX-660 delivered on all three categories.

That said, Yamaha edged out a slight win with a score of 2-1. So, as you can tell, it was a very close fight. Below, I’ll explain exactly how the Yamaha DGX-660 got its two points and the one characteristic where I found the Korg XE-20 to be the superior pick.

Whenever you buy a digital piano, your first question is always how it sounds. So, the first characteristic I analyzed was the tone of both pianos. And as expected, they both sounded great and came with a wide selection of sounds. But even if the Korg XE-20 has a wider sound library, there was no denying that the Yamaha had a superior tone. And because of that, the Yamaha DGX-660 ended up taking the point.

There is nothing wrong with the Korg’s tone generator. It features the Stereo PCM engine that comes from the Korg brand and is one of the best available. When testing the pianos, I instantly fell in love with the piano tones. In fact, there was one specific piano tone -the Italian piano – that I found to be the best and would probably be very at home at a premium stage piano.

That said, even if the Stereo PCM generator is great, it still fell short of the Yamaha DGX-660’s piano tones. This is because the DGX-660 relies on the Pure CF Sound Engine, which aims to replicate the exact sound of the Yamaha CF Grand Pianos, which are some of the most popular grand pianos available.

Because of this, the Yamaha sounds much crisper and brighter than the Korg. Even if the Korg’s tones were very realistic, the Yamaha’s voices were undeniably more detailed, which is why I believe the Yamaha deserved the point when comparing tones.

The Korg XE-20 has a wider sound library than the Yamaha DGX-660. This means that it features more voices as it comes with more than 700 tones. That said, not all of these voices come from the Stereo PCM generator, so there’s an obvious dip in quality with some voices.

Sadly, this is also the case for the Yamaha. It features over 500 voices, but not all of them are as realistic as the tones you get with the Pure CF Sound Engine.

Granted, you will definitely find a way to use these voices. For example, if you have to play various styles of music, all this variety is great. However, if you’re looking to record high-quality digital keyboard sounds with either option, you might find that the quality isn’t the best.

But for the price, I would still definitely say that both pianos offer a lot of value for the money based on tone alone.

The next comparison point I had was the piano feel. This refers to how close to an acoustic piano these digital pianos feel. I had a lot of fun with this comparison point as both pianos feature great hammer action systems. But yet again, the Yamaha DGX-660 comes out on top but by a very narrow margin.

If you’re familiar with Yamaha digital pianos there’s a chance you already know the hammer action system on the DGX-660. Like many Yamaha options in this price range, the DGX-660 uses the Graded Hammer Standard or GHS. This is largely considered one of the best affordable hammer action systems on the market and definitely stands out compared to other models.

This is because the Graded Hammer Standard strikes a great balance between weight and the spring back. While the keys don’t spring back as well as they do on an acoustic piano or on higher-end digital pianos, they do have a much better feel than other affordable hammer action systems.

On top of that, the keys have a graded action. This means that the lower end of the piano features significantly heavier keys than the higher end. The result is a more realistic weight when you play, which is one of the reasons I love the DGX-660.

The Korg XE-20 features naturally weighted hammer action. This means that you still get the graded weight as on the DGX-660, but it’s definitely not as realistic as the Graded Hammer Standard.

Both pianos feature plastic keys that don’t have that much texture on them, which is expected at this price range. But if either model had textured or wooden keys, they would have easily won this comparison.

The one category where the Korg won out over the Yamaha was in the piano features. While both pianos feature a wide array of effects and playing modes as you would expect from arranger pianos, they have different polyphony. And since the Korg has much better polyphony than the Yamaha, it won this point.

Polyphony is the piano’s ability to play simultaneous notes. Since the Korg XE-20 features 256-note polyphony, it can play many samples at the same time. So, whether you want to press all the piano keys at once or if you want the notes to ring out longer when you engage the sustain pedal, the Korg is the better pick.

The Yamaha only features 196-note polyphony. While this is more than decent, it still falls short of the Korg XE-20.

This high polyphony comes in handy when you’re blending two voices together (a feature available on both pianos). This makes the Korg a bit more versatile than the Yamaha, even if I found that the Yamaha has a more realistic feel and better tones.

Just because these pianos come from different brands doesn’t mean that they don’t share any features. In fact, you might be surprised to learn that both pianos share a fair amount of similarities.

This is one of the reasons these pianos are great for performers. Aside from having a realistic feel and various features, these pianos are very versatile. Whether you’re playing rock, pop, or classical music these pianos have the voices and playing modes to suit your style.

Quick Rundown of the Korg XE-20