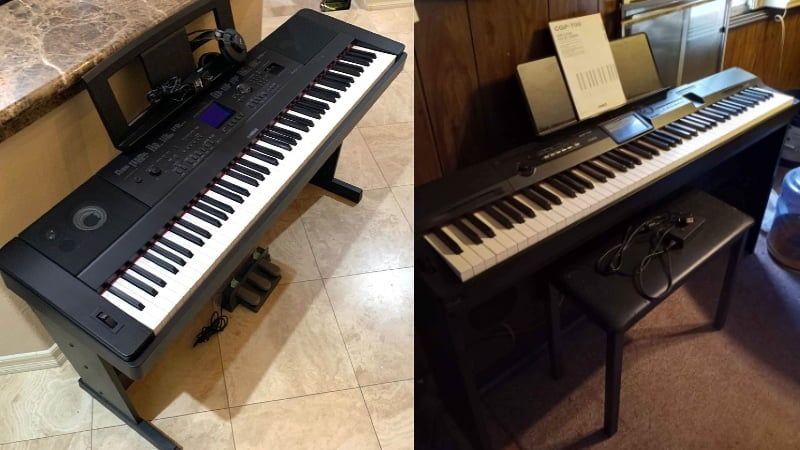 Learn all the features of both pianos and which one is the better investment in this Yamaha DGX-660 vs Casio CGP-700 review!

The Yamaha DGX-660 vs Casio CGP-700 comparison is a very interesting one. Both of these pianos come with huge sound libraries and a very realistic feel, and are arguably some of the best options in their price range.

So, for some, choosing between the two is close to impossible.

But if you’re trying to choose between these two options, you won’t have to split hairs any longer. I tested both pianos and researched all their specifications and features. And by the end, the Yamaha DGX-660 edged out a very narrow victory.

Below, I’ll get into the details of this comparison. I’ll explain why I find the DGX-660 to be the better option, the benefits and drawbacks of each piano, and even the similarities that these two options share. So, by the end, you’ll know exactly which piano will serve your needs the best! 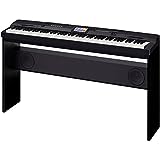 There are three main qualities I consider when comparing digital pianos – the tone, feel, and piano features. These are what I feel are the most important characteristics of a digital piano and the ones you need to pay the most attention to when buying one for yourself.

When I compared the Yamaha DGX-660 and the Casio CGP-700 based on these qualities, the Yamaha option won with a score of 2-1. As you can tell by the score, it was a really close battle that could have gone either way. Keep reading as I get into the fine details of this comparison in the sections below.

If you asked any pianist which piano had the better tone between the DGX-660 and the Casio CGP-700, you’d get a mixed bag of answers. Both pianos come with fairly sophisticated tone engines, so finding the best-sounding option is all a matter of taste. However, the reason I gave the point to the Yamaha DGX-660 when comparing the tone is that it comes with a slightly larger sound library, giving you a bit more variety.

You won’t complain when you listen to the tones of either piano. The Yamaha DGX-660 comes with the Pure CF Sound Engine, which is one of the brand’s most sophisticated options. It uses samples that were recorded directly from Yamaha CF Grand Pianos, which are some of the most popular grand pianos on the market.

This is the reason why the Yamaha comes with very realistic, crisp, and detailed piano tones. Even if you aren’t familiar with grand piano modes, you’ve likely heard a CF Grand Piano before, as it was used in countless recordings.

And when I played the Yamaha DGX-660, the piano tones were almost identical to the sound of the CF instruments. They are very bright and clear, which is what many pianists look for when they buy a new digital piano.

That said, I was quite surprised that the Casio CGP-770 put up a good fight. This piano uses the MXi sound engine, which is one of Casio’s premier tone generators. You won’t get the exact same tones as the Yamaha, but there’s no doubt in my mind that they are comparable in quality.

I preferred the sounds on the Yamaha, but only because my tastes lean heavily toward bright and clear pianos. But if you want a realistic piano tone with a slightly darker quality, the Casio CGP-700 is a great option for you.

The main reason I gave the point to Yamaha in this comparison was its sound library. Now, don’t get me wrong – the Casio comes with a very wide sound engine. With 500 different voices, you’ll have all the sounds you will ever need and more. This is why pianists of all genres will enjoy using the Casio CGP-700.

That said, the Yamaha DGX-660 has a slight edge as the sound library has over 554 different voices. While these voices cover the same categories as the Casio, you still get more choices. This gives you more control over the exact tone and sound you’re producing, which is why this is the preferred option for many pianists.

While both pianos will give you decent variety, there’s no denying that the Yamaha DGX-660 offers a small bit more. If you aren’t that particular about your tones, this feature won’t matter that much. But if you absolutely need sound variety with your digital piano, the Yamaha is by far the better option.

Most of the time, you can’t compete with the hammer action on Yamaha digital pianos. But in this case, the Yamaha actually lost out. While the Yamaha still comes with a great hammer action system, the Casio CGP-700 comes with textured keys. This isn’t the most noticeable feature, but it’s a small detail that makes a huge difference. And for that reason, the Casio CGP-700 takes the point.

Both of these pianos utilize graded hammer action systems. The Yamaha DGX-660 uses the Graded Hammer Standard or GHS, which you’ll find on most of their models. This hammer action system aims to replicate the feel of a real acoustic piano by having heavier bass keys and lighter treble keys.

Compared to most hammer action systems, the GHS system is great. It offers a very realistic weight whenever you play the piano, and the keys even bounce back, similar to how they would on a real acoustic instrument.

That said, the Casio CGP-700 easily matches the GHS hammer action system with the Casio Tri-Scaled Hammer Action II. This system basically accomplishes the same goal as the GHS, but I noticed a bit more springback in these keys, which is reminiscent of high-quality acoustic pianos.

On top of that, the Casio CGP-700 has textured ebony and ivory keys. So, even if the keys are made of plastic, they have a similar texture to the wooden keys on an acoustic piano, which is why it was the easy choice.

The Yamaha DGX-660 also has textured keys, but they aren’t as good as the Casio CGP-700. This is because the DGX-660 only has textured ebony keys, so while you get a realistic texture on the black keys, you don’t get the same experience on the white keys, which was a slight letdown.

The last comparison point I had with these two pianos was the piano features. More specifically, I looked at the polyphony. This is a very important yet often overlooked feature, so I chose to give it my attention. And when comparing the polyphony, the Casio CGP-700 falls short, which is why the Yamaha DGX-660 ended up winning the entire comparison.

The Yamaha DGX-660 comes with 196-note polyphony. While this isn’t the highest polyphony you’ll find with digital pianos; it’s higher than a lot of options in its price range. That way, you can play as expressively as you want, play dense chords, and let notes ring out much longer when the sustain pedal is engaged.

The Casio CGP-700 only has 128-note polyphony, which isn’t too bad, but it isn’t as good as the Yamaha’s. You can still be expressive and play many notes simultaneously with the CGP-700, but it’s a bit limited when compared to the Yamaha DGX-660.

This was a really fun comparison to do because these pianos are very different. But if you look closely, they are actually more similar than you might think. When comparing the two pianos, I actually found a fair amount of similarities worth noting.

To start, these are both perfectly portable instruments that are great for musicians on the go. Whether you need to bring your piano to lessons, gigs, jams, or practice, these are great options. While they may be on the heavier side, you won’t have a hard time carrying either option and loading them in a car.

On top of that, both pianos come with various playing modes. This opens up many opportunities for musicians as you can blend voices, assign separate voices on either side of the piano, or split the keyboard into two twin pianos.

At the end of the day, both of these pianos are very flexible and offer a lot of value for the money. But when I dove into the details, I found that the Yamaha DGX-660 had a slight advantage, which is why it was the ultimate winner in thai comparison.

Quick Rundown of the  Casio CGP-700