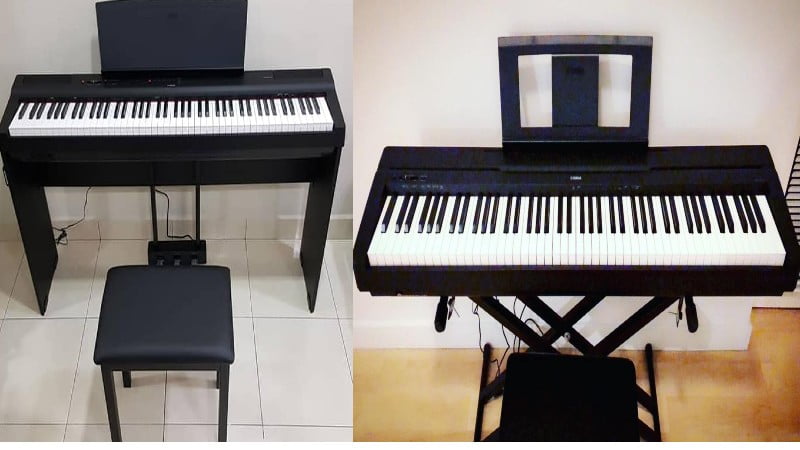 After testing out both models, I instantly knew that the Yamaha P125 was the better option. It uses Yamaha’s special Pure CF Sound Engine, a full 88-key keyboard, and features the Yamaha GHS Weighted Action, which offers a very realistic feel similar to what you’ll get with an acoustic piano. With more tone options, effects, and better sound quality overall, the Yamaha P125 easily beat out the P71.

The only area the P125 lost to the P71 is the price. And in fact, it’s the insane value for the money that makes the P71 my most recommended pick for beginner pianists. While the P125 is great for professional musicians, if you’re getting an instrument for a beginner or intermediate student, the P71 is one of the best options in its price range. It has weighted keys, great built-in sounds, and even comes with reverb effects that allows pianists to experiment with a range of different tones.

It was clear after trying out both options that the Yamaha P125 is the better piano because it has more voices, a better sound engine, and robust features that make it ideal for professional and amateur musicians alike. After comparing all the features, I found that the Yamaha P125 beat out the P71 by 3-2.

The feel and playability of a digital piano is crucial in choosing the best models, and the hammer action plays a big part in that. Both of these pianos are equipped with the Yamaha GHS system, which means it has graded hammer action where the lower keys are heavier and the action gets lighter as you climb up the keyboard. This makes both of the digital pianos great for beginners and professionals since it can mimic the feel of playing on an acoustic piano.

When buying digital pianos, it’s always best to get ones with weighted keys, and the GHS hammer action system of Yamaha is one of the best in the business. When you play either of these models, the keys will feel like it’s a real acoustic piano, which is a huge plus for students and professionals alike.

With that said, the texture of the keys themselves is lacking, to say the least. Since all the keys have a matte finish, it prevents your fingers from slipping off, however, the white keys lack the texture of a real piano. This is one of the downsides to this model, but it’s far from a deal-breaker.

In the world of pianos, tone is a very subjective topic. Everyone has their own preferences when it comes to the timbre of their piano, which makes it pretty tough to judge a piano’s tone with an unbiased eye. However, when looking at the different tone options you have with these pianos, the P125 is a clear winner because of its vast sound library and advanced tone generation system.

The Yamaha P125 uses the Pure CF Sound Engine. This is a software built-in to the piano that recreates the sounds of some of the most famous Yamaha pianos in history. With this software, the instrument can recreate the Yamaha CFIIIS 9 concert grand piano, among other familiar and crisp piano tones.

On the flip side, the P71 uses AMW stereo sampling, which means the piano is loaded with different recordings of instruments that are triggered when you press a key.

The samples on the P71 are great, without a doubt. They were obviously recorded with top of the line equipment and produce a relatively accurate and clear tone. And the P71’s library is powered by AMW, or advanced wave memory, which uses multiple acoustic samples spread over different keys for a more accurate tone.

However, when comparing that to the sound recreation of the Pure CF Sound Engine, the samples aren’t as crisp. And this is one of the main reasons I found the Yamaha P125 to be the better option.

Another reason the Yamaha P125 can create a better tone is a bigger sound library. The piano is equipped with 24 different presets that you can switch between depending on your sonic needs. You can choose between classic grand piano and concert piano sounds, as well as organs and keyboards which you can use for playing more modern pieces of music.

With that said, the P71 also comes with a decent sound library, it just isn’t as vast as the P125’s. The Yamaha P71 only comes with 10 different sounds, which is great for practicing and learning the instrument, but it can be pretty limiting when you’re actually performing on stage.

Another reason the tone and sound of the Yamaha P125 beats out the P71 is the built-in effects. For a beginner’s piano, the P71 already comes with some decent effects to get you started. There’s a built-in reverb in the piano with up to four different presets that allow you to create a different feel with your instrument. While this is great, you can’t save your presets for quick memory when you’re playing, which can be a hassle if you’re particular about your piano’s tone.

On the other hand, the Yamaha P125 comes with even more effects. Aside from a reverb that you can program, the P125 comes with intelligent acoustic control, damper resonance, and a sound boost. All of these allow you to create beautiful piano tones when performing on stage or when recording or practicing on your own.

One of the advantages that digital pianos have over acoustic ones is all the extra features. And when comparing the extras of these two pianos, the P125 easily took the cake. The main reason for this is the split mode and accompaniment features, which we’ll get into more detail about later. For an entry-level piano, the P71 has decent extra features, but it couldn’t stack up against the more professional P125.

Split mode is a great way to become a more versatile piano player, and the P125 has it built-in. This mode allows you to play with two different piano sounds at the same time. For example, you can set the lower keys to trigger grand piano sounds and the higher keys to trigger organ or electric piano sounds. This can give the sonic illusion that you’re playing two different instruments at the same time, which is great for performing.

The P71 doesn’t come with this feature at all, which is sort of a let down. But considering the piano is primarily designed for students and beginners, it’s easy to see why they let that feature go to keep the piano more affordable.

That way, you can play a wide variety of different chords and inversions while still producing a clear sound. On the other hand, the P71 only has a maximum polyphony of 64, which still allows you to play just about all the chords and pieces out there, but the sound just won’t be as clean compared to the P125.

When it comes to accompaniment features, the only similarity between these two is the metronome. Both pianos have a metronome feature which can help you practice playing with perfect timing.

However, the P125 has even more accompaniment options than that, making it a much more versatile instrument. There are over 20 demo songs and over 50 pre-loaded piano songs on the instrument that you can jam along to, which is great for live settings or just practicing and having fun on your own. On top of that, the P125 even has 2-track recording features that allow you to truly explore the possibilities as a musician.

Both of these pianos feature full-key keyboards, so they are about the same size. They weigh around the same as well, but the P125 is lighter by one pound. However, the reason it’s harder to bring the P125 around is that it comes with a furniture stand. This looks great when set up in a living room or any other space, but it makes it hard to move around, which is why the P71 is the more portable option. With that said, there is an option to buy the P125 without the furniture stand, which can give you a bit more flexibility down the line.

These are two very different pianos. But since they are made by the same brand and are in the same category of portable digital pianos, they do share some similarities. We already covered the GHS hammer action system and the feel of the keys, which are basically the same with these two pianos.

On top of that, they both come with a sustain pedal, which is very important for anyone playing a wide variety of music. When you buy either of these options, you also get a music rest that sits on top of the piano where you can place your sheet music to read while performing or practicing.

Both of these pianos lack a MIDI connection, which is a bummer if you produce or record music with the piano. However, they both have headphone inputs so you can plug in your headphones for silent and private practice sessions.

All in all, while these two pianos share some similarities, they are built for different musicians. The P125 is the better option because it is made for advanced and professional musicians, hence the steeper price tag. On the other hand, the P71 is made for students and beginners, so while it doesn’t have as many features as the P125, it makes for a great practice instrument available at an affordable price.

Quick Rundown of the Yamaha P71