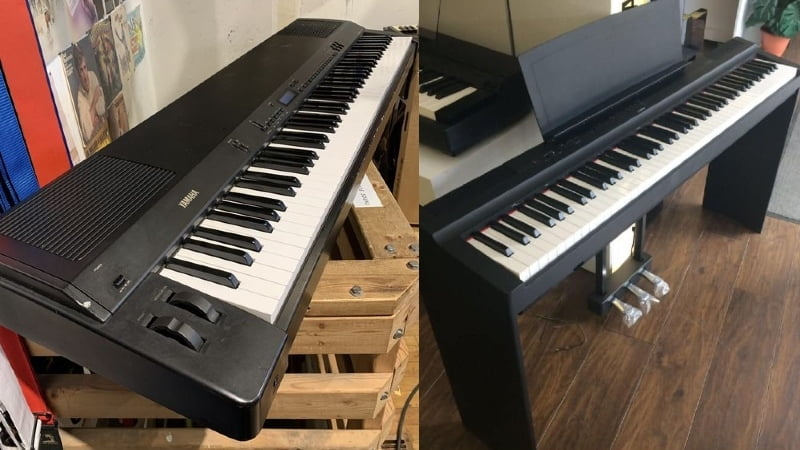 Ever since Yamaha has developed and launched their first digital piano in 1983, they have tirelessly worked on improving their pieces, making it sound and feel like real acoustic uprights or grands and incorporating as many features that would be beneficial to a beginner or a professional musician.

The P or Portable Series is probably the company’s most sought-after variants because of their price and, as the name implies, transportability.

The two featured models in this write-up are Yamaha P150 vs Yamaha P125. The former, released in 1995, is one of the earliest variants in the P-series. The latter, released only in 2018, is obviously more technologically advanced and packed with all the bells and whistles that anyone – novice or otherwise – will appreciate.

The question now is: does the older version still pack a punch in comparison to the newer one? 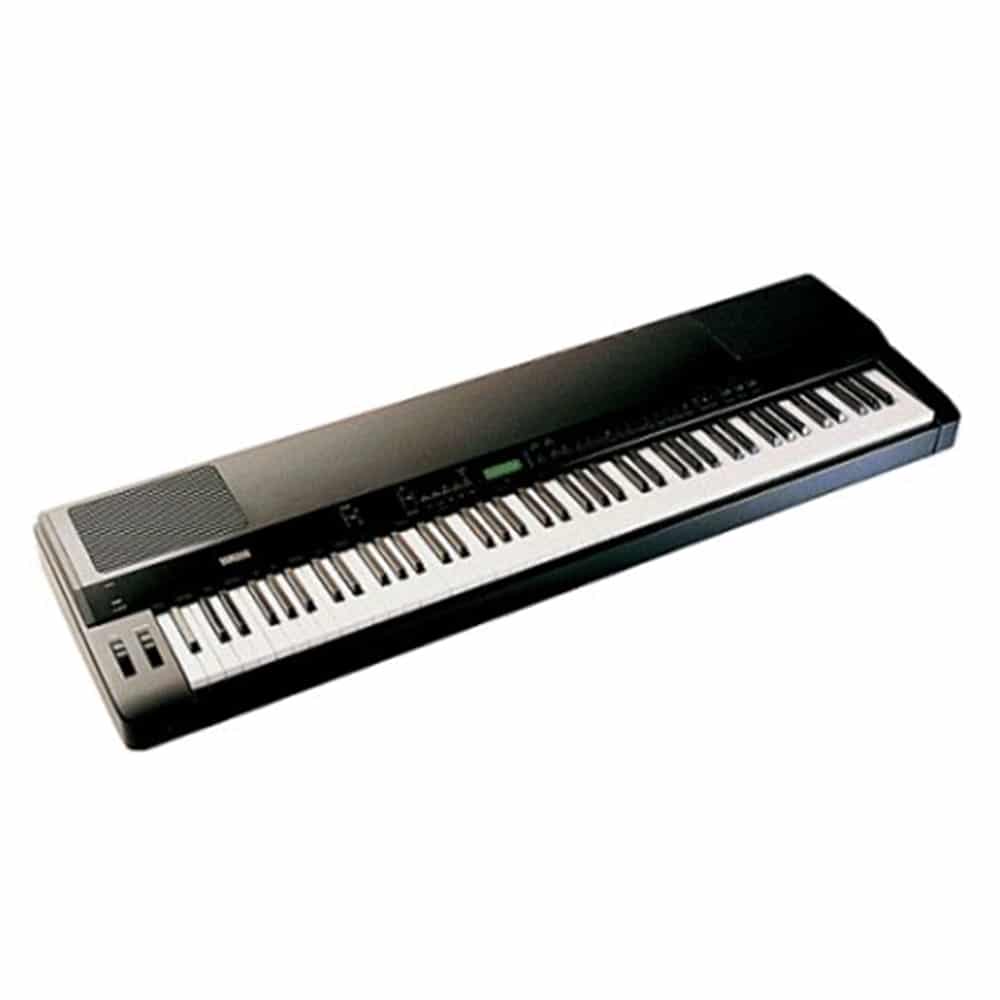 When the P150 first came out, many were truly fascinated by it. And no wonder, it had great key feel and action, several realistic voices, and numerous other features. This was an instrument great for both practicing and even for performances.

Two decades and several re-developed models later, the P125 was launched. And it became a prime pick in the P-series. It has high-tech hammer action, impressive sound engine, a myriad of easy-to-use functions, and is truly portable. Best of all, it’s not overly pricey for an entry-level digital piano.

The choice between Yamaha P150 vs P125, especially at this day and age, seems quite obvious: the newer, more cutting-edge model makes more sense. But musicians who’ve had the P150 for twenty or so years still have great praises for it, saying it beats many modern pieces. The price has also greatly depreciated to $200 or less, making it even more favorable for those on a tight budget. Unfortunately, it’s hard to find a P150 these days – even a second-hand one.

With all those factors considered, the P125 wins this battle 4:1.

Many users have lauded the realistic weightedness and action response of the P150. For a digital piano made in the 90s, it really isn’t bad. Of course, the newer mechanisms made by Yamaha are hard to beat, that’s why the P125 wins in this regard. But that does not mean that I have no complaints in this aspect.

The P150 is outfitted with a mechanism named Action Effect II. There isn’t a lot of reference on this specific instrumentation. However, I can say that the keys are weighted and have enough springiness to feel real.

The P125 is equipped with the Graded Hammer Standard, Yamaha’s most basic yet formidable hammer action mechanism. It isn’t merely weighted. It has the appropriate resistance too – heavier on the bass and lighter on the trebles.

Because expression is incredibly important in piano playing, Yamaha made sure that touch sensitivity is added as a feature in their digital pianos. The company added this to their earlier models like the P150, and made sure that their newer variants including the P125 have it.

Each has four levels of touch sensitivity: Fixed, Soft, Medium, and Hard.

There is one common grievance most people have about entry-level Yamahas: the keytops’ texture. Both the P125 and the P150 have smooth plastic white keys and slightly matte black keys.

I can understand that the older variant has this. But after over two decades, I am quite disappointed that Yamaha has not done anything to rectify this particular feature.

The sound of digital pianos are sampled from acoustic grands or uprights. And because Yamaha has had a whole lot of practice in manufacturing pianos and other musical instruments, often coming up with award-winning ones, you can expect only the best sound from these models.

The P150 makes use of the most basic AWM (Advanced Wave Memory) stereo sampling. In the simplest terms, an acoustic instrument is played and recorded. The sound captured is then ínstalled’ into the digital piano.

The P125’s sound engine is called Pure CF. The process of capturing this is practically the same as AWM. But other than the more state-of-the-art technology used, the piano sound is sampled from the CF grands of Yamaha. The result is crisper, richer, and more brilliant tones.

For a digital piano made in the mid-90’s, it’s quite incredible that the P150 already has 12 voices. Actually, it should be 13 because the bass can be switched between two types: upright and electric.

As expected, the P125 has more in its arsenal. It has 24 in total, four of which are grand piano sounds.

Two decades has definitely given Yamaha enough time to improve their P-Series line. It should be no surprise that the P125 has way more features and functions than its predecessor. But that does not mean that the P150 is completely inferior. In fact, it comes out even better in a few aspects. Nonetheless, the P125 still comes out as the winner here.

Made in 1995, it is quite understandable that the P150 only has a polyphony count of 32. This may be enough for a beginner; but soon, when one’s skill progresses, this would be found sorely lacking.

The P125, on the other hand, has 192 max polyphony. This is quite impressive even today for two reasons: one, it still is marketed as an entry-level piece and two, it surpasses its contemporaries manufactured by other companies.

The P125 has all the necessary playing modes: Layering, Split, and Lesson. The first two are great functions for composing or experimenting with music while the last one is beneficial for beginners who want to practice with their tutors.

The P150 only has two: Layering and Split. I personally find it odd that it doesn’t have the Lesson mode but it would seem that this model was not really marketed as a beginner’s digital piano.

The older P-Series model has a sparse collection in this aspect. However, Reverb (four types) and Modulation (inclusive of Chorus, Symphonic, and Tremolo) are actually enough to elevate the sound quality.

Thanks to more advanced technology, the P125 has way more than just those basics. This includes Intelligent Acoustic Control and Sound Boost.

The P150 does not have any components for internal recording. Again, it’s quite understandable because it’s pretty packed in terms of connectivity so external recording is very possible.

The P125 can capture up to two MIDI tracks internally. It’s even possible to record one song and then layer another recorded song over to create on track. This can then be moved to another device via USB.

For a digital piano developed in the 1990s, the P150 has quite the impressive back panel. It has outlets for Input and Output, footswitch or pedals, and three MIDI connectors. It also has a headphone input in front.

The P125l basically has the same: AUX In, Aux Out, pedal unit, and sustain pedal. Instead of the older MIDI, it has a USB Type B connection. Also, this has two headphone jacks.

But what really makes the P125 amazing is that the various functions mentioned above can be used more efficiently using third party apps. It’s a shame this does not have bluetooth but phones can be connected to the digital piano via USB.

This is the section where the P150 beats the P125. The speaker system on the former has an astounding 60W power, it doesn’t require external amplification. The P125, on the other hand, only has a 14W speaker system.

Apart from the fact that these two are 88-key digital pianos under Yamaha’s P-Series and maybe a couple of tiny details, these models are completely different from each other as detailed above. Even their physical designs are so unlike each other.

When all factors are taken into consideration, the more recent model really wins in this Yamaha P150 vs P125 comparative report.

Quick Rundown of the Yamaha P150