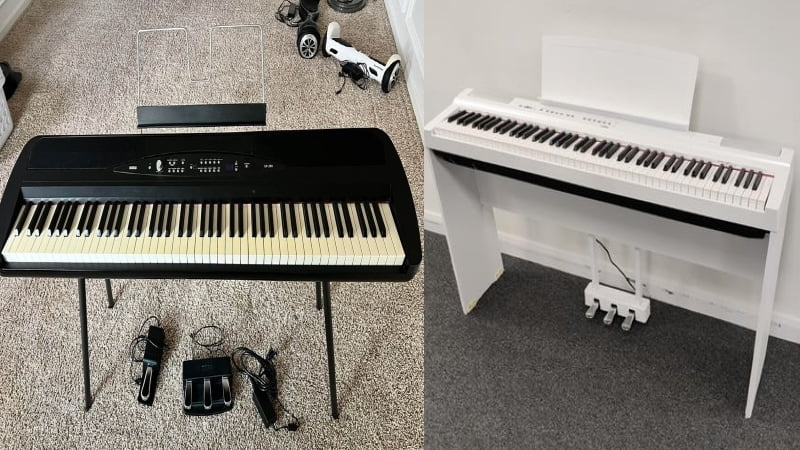 After numerous upgrades made on the P125, most of which are quite incredible, does Korg still stand a chance in the Yamaha P125 vs Korg SP 280 match-up?

Korg and Yamaha are two of the most popular and highly-acclaimed digital piano manufacturers in the whole world. It might surprise many that these two actually have a very close relationship to each other, with the latter supplying parts to the former since 1987.

But even then, and possibly especially now, the companies have a healthy competition going on. Both are trying to outdo the other, with every single piece they create. For example, when it comes to digital pianos for beginners, Yamaha released the P or Portable series while Korg came up with the SP line.

The models often set side by side are Yamaha’s P125 and Korg’s SP 280 initially because the two were released almost at the same time (the former in 2015 and the latter in 2013). But many are surprised to find that the two also have very similar features and functions.

When Yamaha made serious revamps in the P115 and named it P125 in 2018, the SP 280 by Korg seemed to be completely overpowered. The question now is, does Korg have a shot at winning in the Yamaha P125 vs Korg SP 280 race in your eyes?

Although the Yamaha P125 has been upgraded from the P115, many beginners still find it difficult to pinpoint its definitive differences when comparing it to the Korg SP 280.

At first glance, the two models have similar features and functions – playing modes, certain effects, and recording capabilities just to name a few. But keyboard connoisseurs understand that even the most minute detail makes a whole lot of difference. And there are loads of these.

After thoroughly inspecting the two digital pianos and playing them side by side, I came up with a few points that could be helpful in your final decision making. Personally, I give the Yamaha P125 vs Korg SP 280 competition to the former 2:1. But do read on if you’d like to get to know more details about these digital pianos.

This aspect refers to how the digital piano feels under one’s fingertips in comparison to a real acoustic upright or grand, so this is an incredibly important facet to look into.

Marketed as a beginner’s instrument, the feel of P125 and SP 280 are, at best, passable. Personally, I am not a huge fan of the hammer action or the actual keytops found on these two. But if I were a novice player in need of practice equipment that does not cost an arm and a leg, either is acceptable.

Acoustic piano keys are connected to a series of internal mechanisms that basically pushes a hammer up to a string which creates the sound. Any self-respecting digital piano manufacturer aims to mimic this action. And both the P125 with Yamaha’s Graded Hammer System and SP 280 with Korg’s Natural Weighted Hammer Action are satisfactorily equipped in this regard.

While the names given to the mechanisms are different, the actual action is the same. And the feel – heavier on the bass and lighter on the treble – is realistic enough.

Expression is a very important component in piano playing. When the key is pressed softly, the sound created is soft too. When the key is pounded hard, the sound is louder and more resonant. On top of the actual hammer action, touch sensitivity adds to the authentic feel of an acoustic piano.

The P125 has a bit of an edge here because it has four different levels (Soft, Medium, Hard, and Fixed) while the SP 280 only has three (Light, Normal, and Heavy). But the two are pretty much matched in this regard.

Most modern acoustic pianos are made of special wood or synthetic ivory and ebony which provides enough friction under the fingertips. Premier digital pianos try to mimic this as well. Unfortunately, our featured instruments sorely fail here because, despite their black matte keytops, the white ones are made of smooth plastic.

One advantage of digital versions over its acoustic counterpart is that it can do so much more when it comes to sound, one of which is having a collection of different instruments and pre-set demo songs that can help with training. However, digital pianos should be able to recreate those sounds faithfully.

I gave this particular point to the P125 because their sound engine and library are truly impressive, especially for a piece that is under a thousand bucks. To be fair, the SP 280 is not too bad in this regard either. But it just does not live up to its rival.

In the simplest terms, this is  the music box of digital pianos. Although each company has a specific name for their technology, the method they use to capture the sound is the same – sampling. The source, on the other hand, is different.

The P-25 is outfitted with the Pure CF Sound that takes four layers of samples from the Yamaha’s CF III Concert Grand. On the other hand, the SP 280 takes its samples from the world-renowned Steinway.

With amazing sources, these two would have been equals. But the four layers on the P125 creates smoother transitions and more vibrant sounds that would match pricier Yamaha models.

One of the major revamp that Yamaha made on the P115 towards P125 was to increase the number of voices or instruments from 14 to 24. Aside from the several grand voices sampled from the aforementioned CF III, the others (electric, organ, strings, etc.) are incredibly well-sampled and not synthetic-sounding.

However, Korg’s SP 280 wins in this aspect since it has 30 voices – very rarely seen in digital pianos in its price range.

Aside from the sound library of voices, both the P125 and SP 280 have a decent collection of preset songs which anyone can just sit and listen to. The former has 21 demo tracks and 50 piano songs. The latter has less with 20 piano songs.

Aside from affordability, the incredible functionality is another attribute which makes digital pianos slightly more interesting than their acoustic versions. And the models from Yamaha and Korg are definitely packed with these.

The SP 280 may have a long list of incredible features which would equal those in the P115. But it falls short considering the additions made in the P125.

It can be frustrating to play a piano with too low polyphony, especially when your skills are improving. Even if you’re a beginner, it’s best to opt for a digital piano with a max polyphony of 100. Fortunately, the SP 280 has 120 and the P125 has a whopping 192. Obviously, the latter wins in this aspect.

The P125 does have more effects than its competitor, with four types of Reverb, IAC, and Sound Boost, just to name a few. However, quality trumps quantity in the realm of digital pianos. This is in no way a disparagement of Yamaha. But while Korg equipped its model with the bare minimum (Reverb, Chorus, and Brilliance), it’s really enough to reinforce the sound.

For those who want to check their progress or just capture their own compositions, both the P125 and SP 280 have decent recording capabilities. The former can save up to two MIDI tracks internally which can then be moved to another device via USB. The latter can only save externally using an AUX line out.

The usual complaint about Yamaha is their lack of good amplification when it comes to their entry-level models. Many will agree with me, it is the one thing that the company should work on.

This is the aspect where Korg SP 280 wins big having a total of 44W of speaker power. Despite its huge wattage, the sound does not get distorted at full volume. And that makes the SP 280 a great instrument, even for live performances with an audience.

Aside from being portable 88-key digital pianos at under $1000, Korg’s SP 280 and P125 are very different when you check under the hood. Although the two have almost the same features and functions, the actual specifications are diverse – as evidenced by the comparative report above. And what that ultimately concludes is that, in the Yamaha P125 vs Korg SP 280 battle, Yamaha made the better piece.

Quick Rundown of the Korg SP 280