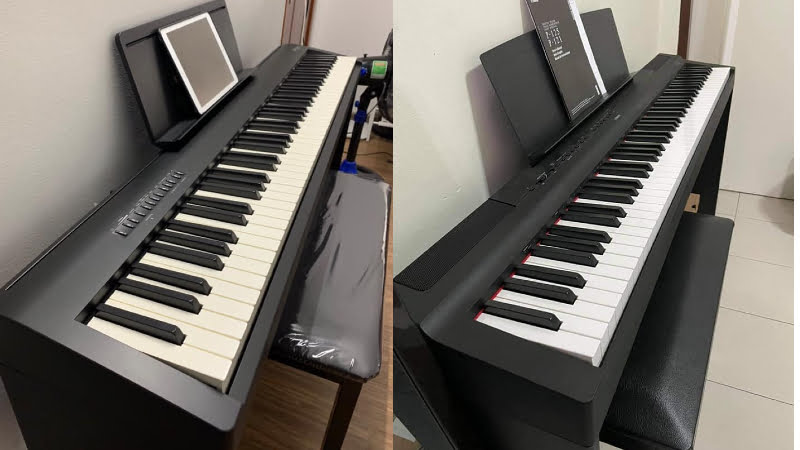 It was a close battle, but after comparing the features head to head, I found that the Roland FP-30X is the winner in this Yamaha P125 vs Roland FP-30X comparison. It was a really narrow win, though, as both pianos offer great value for the price and are very capable and functional instruments.

The reason the FP-30X took the cake was because of a varied sound library, better connectivity options, and superior polyphony. However, the Yamaha P125 was able to hold its own in just about any category of comparison between the two, and I can’t stress enough how close of a battle this was.

Because of all their differences and robust features for beginners and novice pianists, writing this comparison was tough and enjoyable. And as much as I love the P125, I have to admit that the FP-30X is the winner, but only by a little.

When directly comparing the features, the Roland FP-30X edged out the competition by 3-2. However, in each of these categories, the Yamaha P125 was very close behind. But in the end, the superior key texture, sound library, and other connectivity features made it clear that the Roland FP-30X was the winner.

When it comes to the feel, these pianos were almost tied. They share similar progressive hammer action technology, but the reason the Roland FP-30X was the winner was because of its superior key texture.

The Yamaha P125 uses the brand’s GHS (Graded Hammer System). This is a hammer action system designed to emulate an acoustic piano by having heavier keys on the left side that get progressively lighter as you move towards the higher keys. This is a great way of simulating the feel of an acoustic piano and offers a great playability. When trying this piano out myself, I found that the action really felt like an acoustic piano, which is a great feature for just about any pianist.

The reason I gave the Roland FP-30X the win in this category is because of its Ivory key texture. While the keys are still made of plastic, they have a coating designed to simulate the texture of ivory keys, which makes it much easier to play. To be honest, it doesn’t feel exactly like an acoustic piano, but it definitely gets close.

In contrast, the Yamaha P125 doesn’t have any coating at all on its plastic keys. The result of this is a very plastic-like feel on the keys. This doesn’t make too large of a difference when comparing the feel, but when testing out the P125 side by side with the Roland FP-30X, the difference is undeniable. The key texture of the P125 is a slight letdown, but it’s also expected since the P125 is the more affordable model between the two.

This is another area where the competition was very close. Both of the pianos use a similar sound engine, which creates fairly decent tones. Though I did notice that the Yamaha P125 has clearer piano tones because they sampled actual Yamaha pianos. However, the Roland FP-30X has a much wider sound library, making it the more versatile option.

Since both of these pianos have pros and cons to their tone quality, it was a clear tie when comparing the two in this regard.

Both of these pianos use sampling-based technology to generate the tones. However, they do it a bit differently than other pianos. The Yamaha P125 uses the PureCF Sound Engine, while the Roland FP-30X uses the SuperNATURAL Piano sound.

Let’s start with the PureCF Sound Engine. This engine contains top-quality samples recorded from real Yamaha CFIII Grand Concert Pianos. The sounds were recorded by top of the line technology before being subjected to a digital filter. This creates a more realistic sound when you play the keys and provides some of the best piano tones in its price range.

On the flip side, the SuperNATURAL Piano Sound comes from high-quality samples with natural decay. With most digital pianos, the decay is added in post processing to save on memory. Roland didn’t do this and the result is a much more natural decay that is very noticeable if you’re used to acoustic and grand pianos.

The Yamaha P125 has a sound library with 24 different voices. This includes a fair amount of piano tones, e-piano tones, and some other ones such as synth, strings and bass. This provides decent variety in tone, especially for beginners and piano students. However, if you’re looking for tone versatility, the Yamaha P125 is admittedly lacking.

The Roland FP-30X, on the other hand, features a library with 56 different voices. So, you can expect a lot more variety with the FP-30X. You can scan through a bunch of “traditional” piano tones, unique e-piano tones, and a bunch of different extras that provide for hours of fun experimentation. Additionally, if you play with a band, you’ll have significantly more versatility in your sound if you play the FP-30X.

The Yamaha P125 and Roland FP-30X both feature the same playing modes, app integration, and a couple of useful effects for pianists. Because of this, they are tied when it comes to piano features. Though it’s worth mentioning that the Roland FP-30X features BlueTooth connectivity while the Yamaha P125 doesn’t, which gives it a very slight edge that wasn’t enough to declare it the winner in this category.

This is one of the piano features where the Roland FP-30X clearly takes the cake. The Yamaha P125 doesn’t feature MIDI connectivity or BlueTooth. Connecting the P125 device to a phone or computer for app integration can be pretty difficult because of its lack of connectivity options. However, the Roland FP-30X makes it very easy for you to connect to a smartphone and use their partner apps.

The Roland FP-30X is compatible with the Piano Every Day and Piano Designer apps. These allow you to learn certain songs and make adjustments to your piano’s tone, playing mode, and tuning. While this is great, the Yamaha P125 offers way more partner apps for learning piano, tweaking the settings, and even apps to create visual representations of your music.

While the Roland FP30-X has more connectivity abilities, the Yamaha P125 has more partner apps, which is why the pros and cons of each piano even out.

Both of these pianos come with a cool and fun set of effects. On the Roland FP-30X, you get a rotary speaker effect, ambience, and modulation. These give you a fair amount of tone flexibility and versatility, which is further emphasized by its wider sound library.

The Yamaha P125 features Intelligent Acoustic Control, Reverb, Damper Resonance, and a Sound Boost. These are also great effects that are fun to play around with while you learn how to play the piano.

While both of the pianos come with decent effects, both of them are admittedly lacking. Ironically, it would have been great if the Roland FP-30X had Yamaha’s reverb in its effects list and the Yamaha P125 would have greatly benefited from the rotary speaker effect on the FP-30X.

On both pianos, you’ll find the same playing modes, though they might have different names. Both pianos feature dual, duo, and split piano modes. On the Roland FP-30X, the duo piano mode is referred to as twin piano, and the dual mode is also referred to as layering.

Dual mode blends two different piano sounds together. For example, you can blend strings and piano. So, whenever you press a key, it triggers a blend of these two sounds, creating a very unique voice. This is a lot of fun and can actually have some great applications when playing live.

Duo or twin piano mode, on the other hand, divides the piano into two smaller pianos. Both sides of the piano will have the exact same tuning, making this a great mode for piano classes. With duo mode on, the teacher can demonstrate and play specific techniques or pieces without having to crossover to the student’s side. Additionally, this mode allows you to play piano duets and give the illusion of playing two separate pianos.

The last mode is split mode. This assigned one voice to the right side of the piano and one voice to the left. This feature is especially good for playing live, as it creates the illusion of playing two instruments at the same time. For example, you can assign a bass voice on the left  side to keep the rhythm and a piano or synth voice on the right to play lead and melodies.

Since these two pianos are great options designed for students and novices, they share a fair amount of similarities. For starters, they both have full 88-key keyboards with some sort of progressive hammer action. This creates a great feel that accurately replicates the feel of a real acoustic piano.

On top of that, both options come with pedals, which is very valuable for beginner piano students. As you progress through your musical journey, you’ll find a more significant need for the sustain pedal, and it’s great that both of these options arrive with an expression pedal, AC adapter, and everything you need to start playing.

While the Roland FP-30X narrowly edged out the Yamaha P125, both pianos are great options for beginner students who are looking to take their piano lessons seriously. Either piano can last you a fairly long while before needing an upgrade, which is why they are considered some of the best beginner pianos out there.

Quick Rundown of the Roland FP-30X