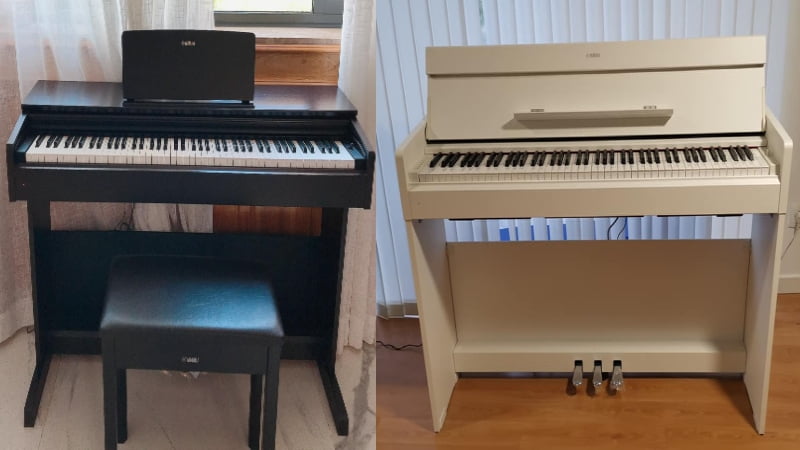 Can’t choose the right option in the Yamaha Arius line? Then this Yamaha YDP-103 vs S34 article contains all the information you need to pick the best model for you.

Choosing digital pianos is hard. Nowadays, technology has gone so far that even the budget-friendly digital pianos come with a wide range of sophisticated features.

This is very evident in the two entry-level options in the Yamaha Arius product line; the YDP-13 and the S34.

While they are the most affordable options in the collection, they contain great features that can rival digital pianos in more expensive price ranges. That’s why I decided to create this Yamaha YDP-103 vs S34 review, to find out which piano is worth your time and money.

And after careful consideration and in-depth research, I found the Yamaha YDP-S34 to be the winner. While it is the more expensive option, it has a better tone engine and superior piano features.

But if you’re on a tight budget, the Yamaha YDP-103 still offers a whole lot of functionality which makes it a great option for beginner and novice pianists alike.

To choose a winner in the most objective way possible, I decided to compare each of these pianos features against each other. And by the end, I was able to come up with a score of 3-1 in favor of the Yamaha YDP-S34, which is about what I expected since this is the more expensive option.

But as you’ll see in this section, the Yamaha YDP-103 put up a fair fight in just about every regard, which is why I still rank it as one of the top digital pianos for the price.

At first glance, you’d think these pianos are tied in terms of tone. After all, they share a similar, if not identical sound library. With that said, when I did the research, I found that the Yamaha YDP-S34 has a superior tone engine, which is the reason why the sound quality is much better compared to the Yamaha YDP-103, despite having the same sound library.

The Yamaha YDP-103 uses the AWM Sampling tone engine. This stands for “Advanced Wave Memory” and is the standard option for Yamaha pianos in this price range. This tone engine works by using multi-layered stereo samples.

Most budget-friendly digital pianos add synthetic decay and other filters on their samples to save on memory. But the Yamaha YDP-103 is different. The piano is equipped with better memory, which is why it can store more data in its samples, creating rich and realistic tones.

With that said, the Yamaha YDP-S34 uses the CFX Sampling engine, which is miles ahead of AWM. This is because the piano tones in this engine are direct recordings of Yamaha CF Concert Grand Pianos.

These are some of the most coveted acoustic grand pianos in the industry today and are known for their bright and rich tones. And since Yamaha recorded these samples with top-of-the-line equipment, you can expect all of the piano tones on the YDP-S34 to be as realistic as ever.

Granted, the difference is fairly minimal between these two pianos. But if you’re an experienced pianist who is very particular about their tone, the Yamaha YDP-S34 might just be the better option for you.

The thing about the Arius collection is that it doesn’t have the widest sound library. This is because Yamaha chose to focus on the quality of the tones over the quantity. So, both pianos only come with 10 pre-loaded voices.

While this may feel limiting, I found that it isn’t. Since all the voices are top-quality and very realistic, I found that I had a lot of room to play different genres and experiment.

With both pianos, you get a set of different acoustic and electric piano voices, some organ voices, string voices, and even bass voices.

So, in the end, the only reason the Yamaha YDP-S34 took the point over the YDP-103 when comparing the tone is because of the superior tone engine.

Since the Yamaha YDP-S34 is more expensive than the YDP-103, I expected it to come with a more sophisticated hammer action system. However, I found that both of these pianos have the exact same feel to them, which is why they are tied in this regard.

In fact, I almost put the YDP-103 as the winner in this category solely because you get the same feel and hammer action at a much more affordable price.

Both of these pianos use the GHS, or Graded Hammer Standard action. This is a key feature of a lot of Yamaha digital pianos. The reason for this is that it effectively replicates the weight and feel of an acoustic piano. On top of that, this hammer action system isn’t that expensive, so pianists don’t have to bust the bank for a realistic feel.

With these pianos, you will notice that the hammer action on the lower keys is a bit heavier than the higher keys. This is how acoustic pianos are set up, and adds an extra layer of realism when you play.

Since the Yamaha YDP-S34 is the more expensive model, though, it would have been nice if it featured GH3 hammer action. This has a more realistic spring back reminiscent of acoustic pianos and is a true premium feature. So, I was slightly disappointed that it wasn’t on the YDP-S34.

In terms of key texture, both of these pianos fared pretty well. Since they both use plastic keys, I wasn’t expecting much. The white keys have no coating at all, so while the difference is barely noticeable, they did have a slightly “plastic” feel to them.

The black keys, on the other hand, have a matte coating. This gives it a slight textural difference to the white keys, which does make the playing experience feel a bit more realistic.

The YDP-103 only has 64-note maximum polyphony. While this is more than enough to handle the needs of most pianists, it’s much smaller than the 192-note polyphony on the YDP-S34. This is because the YDP-S34 is designed to take on heavier pieces.

And since the YDP-S34 has a dual-mode, it’s important to have high polyphony to handle all the samples at the same time.

With that said, when you aren’t using dual-mode, the difference isn’t noticeable at all. But if you’re a pianist that likes experimenting with different combinations and dense chords, you will need the high polyphony on the Yamaha YDP-S34.

On the flip side, the YDP-S34 has IAC and Damper resonance on top of reverb. Granted, these two effects are not for beginners as they only make slight changes to the tone. But if you’re a serious pianist who needs full control over their piano’s tone, then these two additional effects offer a lot more functionality.

These pianos share a fair amount of similarities. This shouldn’t be too much of a surprise, considering the fact that they come from the same product line and is one of the reasons you will be fine choosing either of these options as your primary instrument.

For example, the pianos use the same hammer action system and even have the same key texture. On top of that, they have the same sound library with the same voice choices.

The main difference I found with both of these pianos was in the tone engine and the piano features. But aside from that, these pianos are very similar, which is what you can expect from two pianos from Yamaha’s Arius line.

While the YDP-S34 offers slightly better tones, both of these pianos are great picks for beginners and novice pianists. So, if you’re particular about your tone, then the YDP-S34 is the ideal pick for you. But if you aren’t too keen on customizing your piano tones and are shopping on a budget, the YDP-103 will serve you just fine.

Quick Rundown of the Yamaha YDP-103

Quick Rundown of the Yamaha YDP-S34